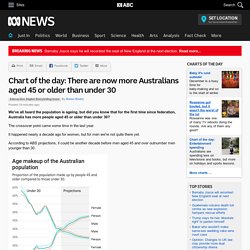 The crossover point came some time in the last year. It happened nearly a decade ago for women, but for men we're not quite there yet. According to ABS projections, it could be another decade before men aged 45 and over outnumber men younger than 30. The English question: Young are less proud to be English. Media playback is unsupported on your device Young people are far less likely to feel proud to be English than older generations, a major survey for the BBC reveals. 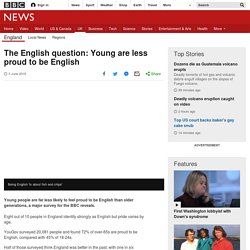 Eight out of 10 people in England identify strongly as English but pride varies by age. YouGov surveyed 20,081 people and found 72% of over-65s are proud to be English, compared with 45% of 18-24s. The US fertility rate just hit a historic low. American women are having so few babies these days that the fertility rate has hit a historic low, according to stunning provisional data just published by the Centers for Disease Control and Prevention. The number of births in the US dropped by 2 percent between 2016 and 2017, to 60.2 births per 1,000 women ages 15 to 44, continuing a general downturn that started with the Great Recession of 2008.

It’s the lowest the fertility rate has been in 30 years. The fertility rate is an important measure of a country’s well-being. Subscribe to read. How refugees can actually create jobs for locals in growing cities – if given the chance. JlWMlhMoc9Nt5vheJQzc3CR0976US3aAFdvHzgRO27U. He was one of millions of Chinese seniors growing old alone. So he put himself up for adoption.   Han Zicheng, 85, rides his bicycle to a nearby market in Tianjin, China, in January. 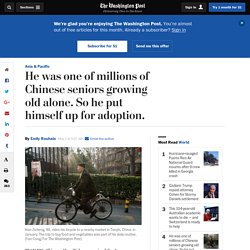 The trip to buy food and vegetables was part of his daily routine. (Yan Cong/For The Washington Post) TIANJIN, China — Han Zicheng survived the Japanese invasion, the Chinese civil war and the Cultural Revolution, but he knew he could not endure the sorrow of living alone. On a chilly day in December, the 85-year-old Chinese grandfather gathered some scraps of white paper and wrote out a pitch in blue ink: “Looking for someone to adopt me.” “Lonely old man in his 80s. “I won’t go to a nursing home. He taped a copy to a bus shelter in his busy neighborhood. Then he went home to wait. Han was desperate for company. He was fit enough to ride his bike to the market to buy chestnuts, eggs and buns, but he knew that his health would one day fail him.

Improved living standards and the one-child policy have turned China’s population pyramid upside down. With 250 babies born each minute, how many people can the Earth sustain? How many people are there in the world? 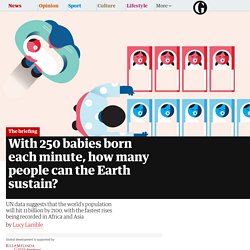 We don’t know for sure as all figures are estimates, but UN data suggests there were about a billion people in 1800, 2 billion in 1927, 5 billion in 1987 and just over 7.5 billion today. There are on average about 250 babies born every minute – more than 130 million in a year. China, India grapple with the consequences of too many men, Asia News. BEIJING/NEW DELHI (WASHINGTON POST) - Nothing like this has happened in human history. 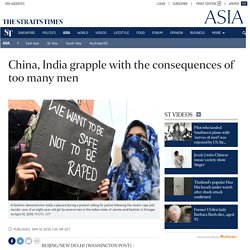 A combination of cultural preferences, government decree and modern medical technology in the world's two largest countries has created a gender imbalance on a continental scale. Men outnumber women by 70 million in China and India. The consequences of having too many men, now coming of age, are far-reaching: Beyond an epidemic of loneliness, the imbalance distorts labour markets, drives up savings rates in China and drives down consumption, artificially inflates certain property values, and parallels increases in violent crime, trafficking or prostitution in a growing number of locations.

Those consequences are not confined to China and India, but reach deep into their Asian neighbours and distort the economies of Europe and the Americas, as well. Barely recognised, the ramifications of too many men are only starting to come into sight. In the two countries, 50 million excess males are under age 20. Income Mobility Charts for Girls, Asian-Americans and Other Groups. Or Make Your Own. Britons living in rest of EU are mainly working age, not over-65s.

The majority of British migrants living in Europe are of working age, even in Spain, the most popular EU country for UK citizens to settle in, new figures show. 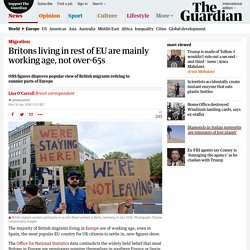 The Office for National Statistics data contradicts the widely held belief that most Britons in Europe are pensioners sunning themselves in southern France or Spain. ONS figures show two-thirds of the 784,900 British citizens recorded as long-term residents in the EU, excluding the UK and Ireland, are aged between 15 and 64 and more of them live in Spain than any other country. Estimates using data from the Labour Force Survey and the 2011 European censuses put the number of British people resident long-term in Spain at 293,500.

France is the next most popular country to live in, with 152,900, followed by Germany, with 96,500, and the Netherlands with 45,300. Women Lose Out to Men Even Before They Graduate From College. For almost 40 years, women have outnumbered men on U.S. college campuses. 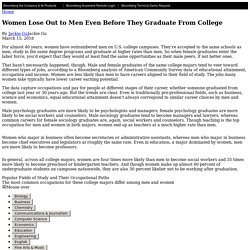 They’re accepted to the same schools as men, study in the same degree programs and graduate at higher rates than men. So when female graduates enter the labor force, you’d expect that they would at least find the same opportunities as their male peers, if not better ones. That hasn’t necessarily happened, though. Male and female graduates of the same college majors tend to veer toward different types of jobs, according to a Bloomberg analysis of American Community Survey data of educational attainment, occupation and income.

Women are less likely than men to have careers aligned to their field of study. The data capture occupations and pay for people at different stages of their career, whether someone graduated from college last year or 30 years ago. Male psychology graduates are more likely to be psychologists and managers; female psychology graduates are more likely to be social workers and counselors. Teachers. Where are the UK's youngest and oldest city populations? Image copyright Alamy Cities are often thought of as places for the young, but the reality is that many have an ageing population. 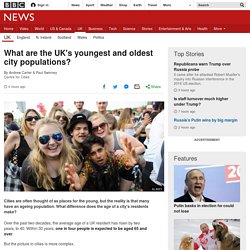 What difference does the age of a city's residents make? Over the past two decades, the average age of a UK resident has risen by two years, to 40. This disease kills half the people who get it, but you've probably never heard of it. In the 1910s, British physician Alfred Whitmore and assistant surgeon C S Krishnaswami noticed a gruesome trend among the patients at Rangoon General Hospital in Burma (in what is now the city of Yangon in Myanmar). 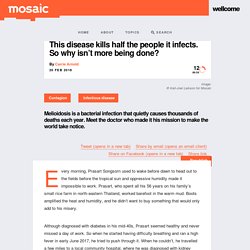 A steady stream of young men, either dead or nearly so, were showing up with blistering fevers, malnutrition and track marks from injecting opium. Initially, Whitmore suspected the opium was the cause of their illness, but the speed of their decline and the location of abscesses far from injection sites caused him to rethink. When they grew bacteria from the men’s abscesses, they discovered that “cultures from both lungs and spleen gave luxuriant growths in pure culture of the bacillus under investigation”. They named this bacteria Bacillus pseudomallei, but without antibiotics there was little to be done for these malnourished, sickly and vulnerable patients.

Italy is older than ever as birthrate falls to all-time low. Nearly 23 percent of Italy's population is over 65. 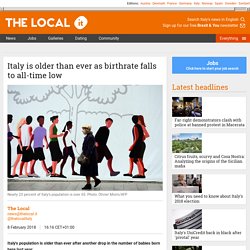 Photo: Olivier Morin/AFP Italy's population is older than ever after another drop in the number of babies born here last year. Some 464,000 babies were born in Italy in 2017, according to the latest figures from national statistics bureau Istat. That was 9,000 below the 2016 total, which was already 12,000 fewer than the year before that. The trend stretches back further: over the past ten years, births have fallen by 100,000. Economist. A. Global trends in consumption - #IBGEOG19. Fertility Rate. More precisely it is average number of children that would be born to a woman over her lifetime if 1) the woman were to experience the exact current age-specific fertility rates through her reproductive years and 2) the woman were to survive from birth through the end of her reproductive life (most institutions define this age bracket as 15-49 years). More detail on the metrics can be found in the section on measurement further below in this entry (here).The level of the so called ‘replacement fertility’ depends on the level of mortality of women until the end of their reproductive years.

With high mortality at a young age the replacement fertility level is therefore higher than 2 children per woman.The second aspect considered in the measurement of the TFR is that the representative woman were to survive from birth through the end of her reproductive life. The Total Fertility Rate is a period indicator and in this way similar to period life expectancy.

5 charts that show how migration is changing the world’s cities. In 2015, over a billion people migrated: 244 million went abroad and 763 million moved within their home country. Some boarded planes to start a new job in another country. Mapping Europe's Demographic Shifts, 2006-2016 - CityLab. Younger people are fleeing rural areas, migrating northward, and having fewer children. Here’s how that’s changing the region. Europe’s population is on the move, and a new report suggests exactly where and why. Released last week by Eurostat, the statistical office of the E.U., this blockbuster annual yearbook offers a dizzying number of insights into the state of a changing Europe. 4 Maps Crucial to Understanding Europe's Population Shift - CityLab. Despite economic growth in Central and Eastern Europe, the continent is still migrating to the Northwest. Europe’s population is shifting to the Northwest.

The GDP in its more easterly nations seems to be booming, while the countryside and many smaller cities continue to empty at the expense of the great conurbations. And while Europe’s southern nations continue to suffer under austerity, cities around the Mediterranean are nonetheless among the fastest growing in terms of population. Matt Hartzell's Blog: Maps: China's Internal Migration.

This Is How Empty Canada Really Is (PHOTOS) These maps show you just how divided US cities are - even on education. Scientists thought humans couldn't live past 115 - but now some say there could be no limit. Elderly South Korean women practice TaeKwonDo Chung Sung-Jun/Getty Images Jeanne Calment, the French woman who holds the record for the longest verified lifespan, died in 1997 at 122 years old. Few people, of course, ever become supercentenarians — 110 years old or older — and even fewer hit 115.

4 maps that will change how you see migration in Europe. More people live inside this circle than outside of it - and other demographic data you should know. Fact Sheet: Attaining the Demographic Dividend. (November 2012) Many countries in Asia and Latin America have experienced impressive economic growth over the last two decades, and researchers, economists, and demographers have attributed these gains in part to demographic changes that have facilitated growth. This demographic contribution to accelerating economic growth—the "demographic dividend"—is particularly misunderstood by leaders and decisionmakers in developing countries who, based on their large youth populations, are optimistic about the prospects for such a dividend.

The Earth's population is going to reach 9.8 billion by 2050. Watch The Movements Of Every Refugee On Earth Since The Year 2000. Animated Map: The 20 Most Populous Cities in the World by 2100. World population day in numbers. Chart: From Pyramids to Skyscrapers. From pyramid to bell to high-rise building — that is how the age structure of the world’s population will have developed from 1950 to 2100, according to UN calculations, which is a good thing. The one-child policy in China - Centre for Public Impact. Iceland Invaders: Coping with the numbers. 'I don't want any more sadness in my life' - comedy theatre about life in the Calais refugee camp. Economist. Women at work - Trends 2016: Map: Explore the gender labour gap around the world.