Throwback Thursday: Tillerson Says Trump Directives Often Violated Law. It's weeks like this that makes me happy that Crooks and Liars has ad-free, searchable, video archives. 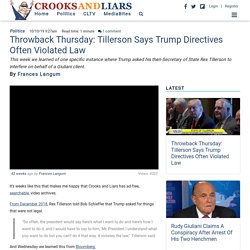 From December 2018, Rex Tillerson told Bob Schieffer that Trump asked for things that were not legal. "So often, the president would say here's what I want to do and here's how I want to do it, and I would have to say to him, 'Mr. President I understand what you want to do but you can't do it that way. It violates the law,'" Tillerson said. And Wednesday we learned this from Bloomberg: President Donald Trump pressed then-Secretary of State Rex Tillerson to help persuade the Justice Department to drop a criminal case against an Iranian-Turkish gold trader who was a client of Rudy Giuliani, according to three people familiar with the 2017 meeting in the Oval Office.Tillerson refused, arguing it would constitute interference in an ongoing investigation of the trader, Reza Zarrab, according to the people. 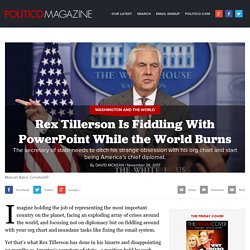 Yet that’s what Rex Tillerson has done in his bizarre and disappointing 10 months as America’s secretary of state—a position held by such giants as Dean Acheson, Henry Kissinger and James Baker. Unlike his predecessors, who generally left the day-to-day management of the State Department to others, Tillerson has reportedly immersed himself in a mysterious, corporate-inflected overhaul of Foggy Bottom’s bureaucracy. Story Continued Below The staff of the State Department has not taken kindly to Tillerson’s ministrations: Experienced and talented diplomats are fleeing; top posts have inexplicably gone unfilled; and those left behind are demoralized and adrift.

Applications for the foreign service are down by half. Rex Tillerson Encumbered by Nikki Haley Drama, ‘Moron’ Comment. Rex Tillerson has lost his primary reason for being the secretary of state. Secretary of State Rex Tillerson waits for a luncheon with Kuwait’s Emir Sheikh Sabah al-Ahmad al-Sabah in the Cabinet Room of the White House in September. 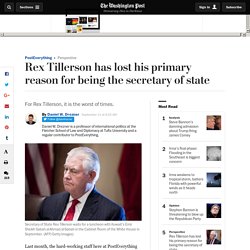 (AFP/Getty Images) Last month, the hard-working staff here at PostEverything called on Secretary of State Rex Tillerson to resign. So far, he has not taken my advice. This is hardly surprising, as the power of Spoiler Alerts is minuscule. What is surprising, however, is that Tillerson even wants the job at this point. Put Tillerson out of his misery, Mr. President — just fire him. Scoop: Trump frustration with Tillerson rising fast - Axios. "Environmental policies are generally going to create winners and losers, with some industries negatively affected, while some will gain," said Marc Hafstead, an economist at the nonpartisan environmental think tank Resources for the Future. 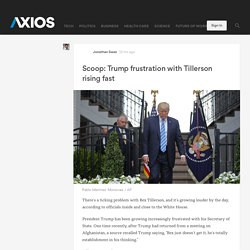 "The magnitude of the kinds of gains or losses tend to be overstated by both sides. " On the right, a recent example of using misleading numbers comes from President Trump himself. When he announced he was withdrawing from the Paris climate accord, Trump cited part of a study by NERA Economic Consulting that was backed by the U.S. Chamber of Commerce and conservative think tank American Council for Capital Formation. It concluded that then-President Obama's pledge to the climate deal would cost as many as 6.5 million industrial jobs and almost $3 trillion economic gains by 2040. ‘Silence is deafening’: Internet shames Tillerson’s ‘moral cowardice’ for ignoring question on Syria. Climate Emails From Former Exxon CEO Rex Tillerson's Alias Account Have Disappeared. State Department ordered New York medical examiner to conceal Russian diplomat’s cause of death. Here Is What Russians Think and Know About Rex Tillerson, Trump's Pick for Secretary of State (Video) 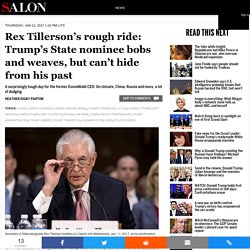 It was immediately clear this was not going to be the day he executed the long-awaited pivot to presidential behavior. It was a crazy event held in the lobby of Trump Tower, featuring cheering Trump Organization staffers in the crowd treating it like a Trump Victory rally. The president-elect announced that he was not going to divest from his business, and explained that because he is a “germophobe” he could not possibly be the subject of blackmail — or at least not on the basis of the allegations in Tuesday’s bombshell report. And that was before he started screaming at reporters. Trump never answered the direct question about whether anyone associated with his campaign had been in contact with representatives of the Russian government, but he did admit for the first time that Russia apparently hacked his opponent’s presidential campaign.