Climate Change Is Turning The Water Around Us Into A Threat. Climate Change Is Not The ‘Biggest Killer’ Of Biodiversity. Nobody can buy the silence of a climate spinning out of control. Deadly Mudslides in Mexico Have Buried Two Towns. NEWS BRIEF Violent rains caused by Hurricane Earl sent mud flowing down hillsides and killed about 40 people in two Mexican towns along the east coast over the weekend. 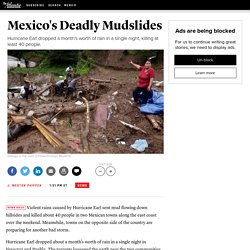 Meanwhile, towns on the opposite side of the country are preparing for another bad storm. Hurricane Earl dropped about a month’s worth of rain in a single night in Veracruz and Puebla. Environment: due to the human activity, planet Earth reaches overshoot point and now lives on credit. Overstromingen Macedonië kosten ruim twintig mensen het leven. The Lonely, Thirsty, Final Days of the Doomed Alaskan Mammoths. It’s 3,600 B.C. 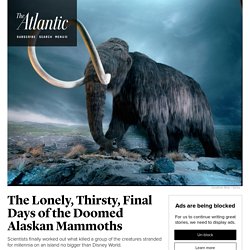 Humanity is ascendant. We’re a few centuries out from inventing writing and entering the Bronze Age, but we are already smelting copper and lead, fashioning silk, and making wheels. In the Middle East, the great civilizations of Egypt and Mesopotamia are poised to take off. Saint Paul lies halfway between Russia and the United States. It used to be part of a land bridge that connected Asia and North America. The Climate Post: Climate-Change-Related Precipitation Extremes Hard to Predict. Scientists have warned that severe drought and precipitation are among the risks of greenhouse-gas-induced climate change, but a study published in the journal Nature finds that extremely warm temperatures do not always translate into record wet and dry extremes. 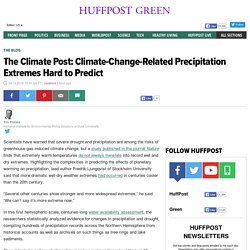 Highlighting the complexities in predicting the effects of planetary warming on precipitation, lead author Fredrik Ljungqvist of Stockholm University said that more dramatic wet-dry weather extremes had occurred in centuries cooler than the 20th century. Oil industry knew of 'serious' climate concerns more than 45 years ago. The oil industry’s knowledge of dangerous climate change stretches back to the 1960s, with unearthed documents showing that it was warned of “serious worldwide environmental changes” more than 45 years ago. 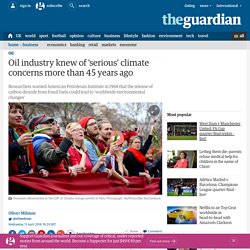 The Stanford Research Institute presented a report to the American Petroleum Institute (API) in 1968 that warned the release of carbon dioxide from burning fossil fuels could carry an array of harmful consequences for the planet. The emergence of this stark advice follows a series of revelations that the fossil fuel industry was aware of climate change for decades, only to publicly deny its scientific basis. “Significant temperature changes are almost certain to occur by the year 2000 and these could bring about climatic change,” the 1968 Stanford report, found and republished by the Center for International Environmental Law, states.

The scientists estimated that CO2 in the atmosphere could reach 400 parts per million by 2000. The Santa Fe Strategy: How Small Cities Can Act on Climate and Inequality. This year, as global average temperatures reach unprecedented highs, arctic sea ice recedes to record lows, and carbon dioxide in the atmosphere exceeds 400 parts per million, Congress is—predictably—focused on cutting funding for environmental protection and dismantling the Clean Power Plan. 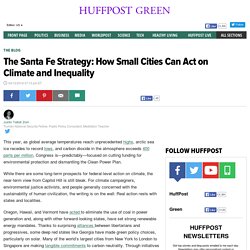 While there are some long-term prospects for federal-level action on climate, the near-term view from Capitol Hill is still bleak. For climate campaigners, environmental justice activists, and people generally concerned with the sustainability of human civilization, the writing is on the wall: Real action rests with states and localities. Oregon, Hawaii, and Vermont have acted to eliminate the use of coal in power generation and, along with other forward-looking states, have set strong renewable energy mandates. 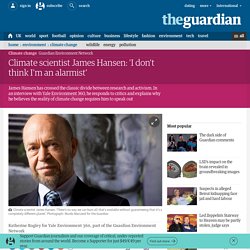 His 1988 congressional testimony on climate change helped introduce the problem of rising greenhouse gas emissions to the American public, and he has led study after study examining exactly how our world will change as a result of global warming. Climate Change Is Literally Causing Earth's Poles To Shift. A Plan to Tackle a Changing Climate. When the rains came to Senegal’s capital and largest city, Dakar, in 2009, the people in Cite de Soleil were up to their chests in water. 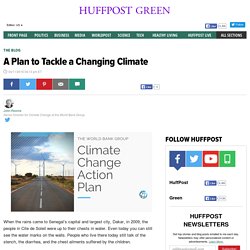 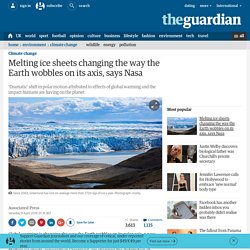 Melting ice sheets, especially in Greenland, are changing the distribution of weight on Earth. And that has caused both the North Pole and the wobble, which is called polar motion, to change course, according to a study published on Friday in the journal Science Advances. Scientists and navigators have been accurately measuring the true pole and polar motion since 1899, and for almost the entire 20th century they migrated a bit toward Canada. But that has changed with this century, and now it’s moving toward England, according to study lead author Surendra Adhikari at Nasa’s Jet Propulsion Lab.

“The recent shift from the 20th-century direction is very dramatic,” Adhikari said. Global warming may be far worse than thought, cloud analysis suggests. Climate change projections have vastly underestimated the role that clouds play, meaning future warming could be far worse than is currently projected, according to new research. 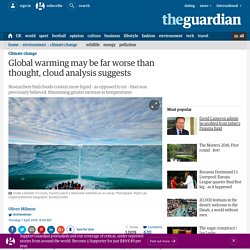 Researchers said that a doubling of carbon dioxide in the Earth’s atmosphere compared with pre-industrial times could result in a global temperature increase of up to 5.3C – far warmer than the 4.6C older models predict. The analysis of satellite data, led by Yale University, found that clouds have much more liquid in them, rather than ice, than has been assumed until now. Climate change will wipe $2.5tn off global financial assets: study. Climate change could cut the value of the world’s financial assets by $2.5tn (£1.7tn), according to the first estimate from economic modelling. 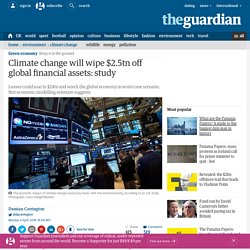 In the worst case scenarios, often used by regulators to check the financial health of companies and economies, the losses could soar to $24tn, or 17% of the world’s assets, and wreck the global economy. The research also showed the financial sense in taking action to keep climate change under the 2C danger limit agreed by the world’s nations.

Two New Terrifying Predictions of Sea Level Rise. This is ‘Not Doomed Yet,’ The Atlantic’s newsletter about global warming. It lives here in the science section; you can also get it in your inbox: A tale of two climate scenarios. Last week, a team of researchers released new estimates of how the West Antarctic ice sheet could rapidly melt before 2100. The study predicts a sea-level rise of six feet within the next eight decades, much higher than previous consensus estimates. The melt would send the sea level soaring around the world, deluging nearly every coastal city. The week before, the former head of climate science at NASA, James Hansen, published his long-awaited study (with dozens of co-authors) on how more ice melt from the poles could dramatically shift global weather, creating hemispheric superstorms strong enough to toss up huge boulders from the ocean floor.

Dit is een van de effectiefste manieren om de wereldwijde uitstoot van CO2 terug te brengen. How Much Warmer Was Your City in 2015? Short Answers to Hard Questions About Climate Change. 3. Is there anything I can do? Fly less, drive less, waste less. You can reduce your own carbon footprint in lots of simple ways, and most of them will save you money. You can plug leaks in your home insulation to save power, install a smart thermostat, switch to more efficient light bulbs, turn off the lights in any room where you are not using them, drive fewer miles by consolidating trips or taking public transit, waste less food, and eat less meat.

Climate Model Predicts West Antarctic Ice Sheet Could Melt Rapidly. “You could think of all sorts of ways that we might duck this one,” said Richard B. Alley, a leading expert on glacial ice at Pennsylvania State University. “I’m hopeful that will happen. But given what we know, I don’t think we can tell people that we’re confident of that.”

Dr. Bjarke Ingels on the New York Dryline: 'We think of it as the love-child of Robert Moses and Jane Jacobs' There aren’t many architects you would believe could hold back seas and save the world from being drowned by Biblical floods. But when you meet Bjarke Ingels, anything seems eminently possible. At the age of 40, a mere teenager in architectural terms, the sprightly Danish architect has built a career on making unlikely feats appear effortlessly doable, and madcap schemes look perfectly logical. He has summoned mountain-shaped apartment blocks from the suburban flatlands of Copenhagen, designed a waste-to-energy plant down whose sloping rooftop you will be able to ski and proposed a cage-free zoo in which visitors will be held captive while the animals roam free.

He’s even convinced Google to build a pastoral utopia beneath an enormous glass tent. As Seas Rise, Nature Can Protect Our Cities. This week’s news that Antarctic ice sheets are melting more quickly than predicted and sea levels around the world could rise by 5-6 feet by this century’s end - doubling some previous estimates. This week’s news, and similar predictions in recent months, have been met with concerns of 45 million displaced in coastal Chinese cities and major Australian population centers “slipping under the waves.” Why Companies Shouldn't Hide The Financial Risks Of Climate Change. Sea levels set to 'rise far more rapidly than expected'

Sea levels could rise far more rapidly than expected in coming decades, according to new research that reveals Antarctica’s vast ice cap is less stable than previously thought. The UN’s climate science body had predicted up to a metre of sea level rise this century - but it did not anticipate any significant contribution from Antarctica, where increasing snowfall was expected to keep the ice sheet in balance. According a study, published in the journal Nature, collapsing Antarctic ice sheets are expected to double sea-level rise to two metres by 2100, if carbon emissions are not cut.

Carbon Sinks: The Next Big Thing (Part 3) The Violent Remaking of Appalachia. Carbon emission release rate ‘unprecedented’ in past 66m years. Humanity is pumping climate-warming carbon dioxide into the atmosphere 10 times faster than at any point in the past 66m years, according to new research. Paleo-Ecological Observatory Network. Great Barrier Reef coral bleaching threat raised to highest level. February was the warmest month in recorded history, climate experts say.

How the Rings on Coral Fossils Revealed the Changing Length of a Year on Earth.