#TheGreatListen 2015. We are excited to use the new StoryCorps app to bring the country together in a project of listening, connection and generosity. 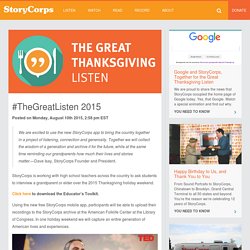 Together we will collect the wisdom of a generation and archive it for the future, while at the same time reminding our grandparents how much their lives and stories matter. —Dave Isay, StoryCorps Founder and President. StoryCorps is working with high school teachers across the country to ask students to interview a grandparent or elder over the 2015 Thanksgiving holiday weekend. Click here to download the Educator’s Toolkit. Using the new free StoryCorps mobile app, participants will be able to upload their recordings to the StoryCorps archive at the American Folklife Center at the Library of Congress. The scale of the Great Thanksgiving Listen is made possible by the new StoryCorps mobile app that was launched in March using the $1 million 2015 TED Prize (watch Dave’s TED Talk announcement above). Click here for more information. These 6 Corporations Control 90% Of The Media In America. The commodification of rebellion - Sociological Images.

Tony Piro, at Calamaties of Nature, has a great cartoon exposing how commodified forms of rebellion can be quite expensive. 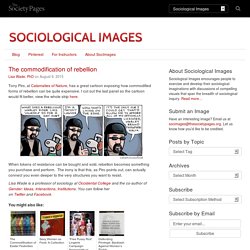 I cut out the last panel so the cartoon would fit better, view the whole strip here. When tokens of resistance can be bought and sold, rebellion becomes something you purchase and perform. The irony is that this, as Piro points out, can actually connect you even deeper to the very structures you want to resist. ‘Do What You Love’ Is Terrible Advice. It’s been said in many places and by many luminaries: Do what you love. 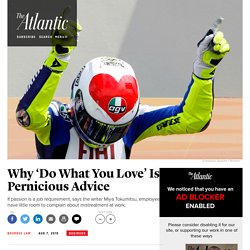 But what does this phrase actually mean? Miya Tokumitsu, a contributing editor at Jacobin magazine and author of the new book Do What You Love And Other Lies About Success and Happiness, criticizes the pervasiveness of this idea in American work culture. She argues that “doing what you love” has been co-opted by corporate interests, giving employers more power to exploit their workers. I recently spoke with Tokumitsu about work myths and why we should pay attention to them. The following transcript of our conversation has been edited for clarity. Bourree Lam: Your book started as an essay, “In the Name of Love,” (which was later republished by Slate) that really touched a nerve with people. Miya Tokumitsu: I’ve noticed in other mainstream outlets that there’s been a lot more writing about work and work culture, particularly professional work.

Lam: And Steve Jobs. Tokumitsu: Steve Jobs, yes. American Muslims: A Vibrant History, Misplaced Hatred - Law Street (TM) The United States is a patchwork of cultures so diverse that large groups can often go under the radar unnoticed or unidentified. 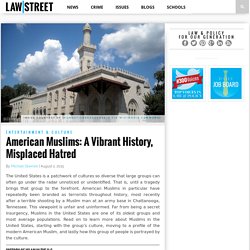 That is, until a tragedy brings that group to the forefront. American Muslims in particular have repeatedly been branded as terrorists throughout history, most recently after a terrible shooting by a Muslim man at an army base in Chattanooga, Tennessee. This viewpoint is unfair and uninformed. Far from being a secret insurgency, Muslims in the United States are one of its oldest groups and most average populations. Read on to learn more about Muslims in the United States, starting with the group’s culture, moving to a profile of the modern American Muslim, and lastly how this group of people is portrayed by the culture. The Changing Demographics of America.

The Many Causes of America’s Decline in Crime. The dramatic rise of incarceration and the precipitous fall in crime have shaped the landscape of American criminal justice over the last two decades. 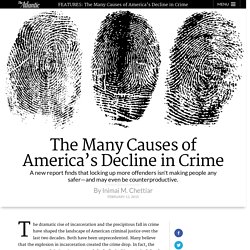 Both have been unprecedented. Many believe that the explosion in incarceration created the crime drop. In fact, the enormous growth in imprisonment only had a limited impact. And, for the past thirteen years, it has passed the point of diminishing returns, making no effective difference. We now know that we can reduce our prison populations and simultaneously reduce crime. This has profound implications for criminal justice policy: We lock up millions of people in an effort to fight crime. The link between rising incarceration and falling crime seems logical. Not so fast. So incarceration skyrocketed and crime was in free fall. Our team of economic and criminal justice researchers spent the last 20 months testing fourteen popular theories for the crime decline.