"Being overly concerned about work, driven by an uncontrollable work motivation, and investing so much time and effort to work that it impairs other important life areas."

Workaholism Is Killing You. Today being “crazy busy” is a way of life. 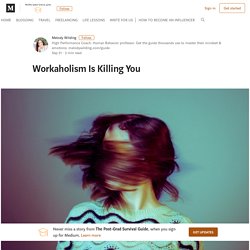 Americans are taking less vacation time than ever before not only to show dedication, but also to simply keep up with the demands they face. This pressure to stay competitive combined with the 24/7, always-on reality has contributed to a well-documented rise in burn out. In fact, nearly 40% of employees say they actually want to be seen as a “work martyr” by their boss. According to a study by Project: Time Off, a work martyr is defined as someone who feels a sense of shame for taking time off. Workaholics Have Serious Psychiatric Disorders, Researchers Find. Are you staying up late to finish “important” emails? 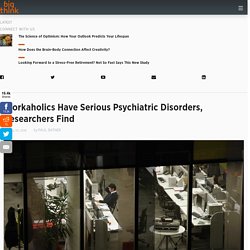 Do you take work home on the weekends? You might want to re-examine why you are working so hard, because according to Norwegian researchers, workaholics often have a number of psychiatric disorders. A study led by the University of Bergen examined 16,426 working adults and found an association between workaholism and psychiatric problems. In particular, it was found that: - 32.7% of workaholics had ADHD. Leisure, the Basis of Culture: An Obscure German Philosopher’s Timely 1948 Manifesto for Reclaiming Our Human Dignity in a Culture of Workaholism. By Maria Popova “Leisure lives on affirmation. 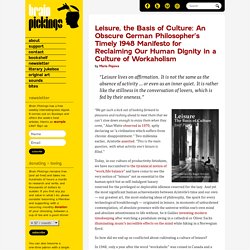 It is not the same as the absence of activity … or even as an inner quiet. It is rather like the stillness in the conversation of lovers, which is fed by their oneness.” “We get such a kick out of looking forward to pleasures and rushing ahead to meet them that we can’t slow down enough to enjoy them when they come,” Alan Watts observed in 1970, aptly declaring us “a civilization which suffers from chronic disappointment.” Two millennia earlier, Aristotle asserted: “This is the main question, with what activity one’s leisure is filled.” Today, in our culture of productivity-fetishism, we have succumbed to the tyrannical notion of “work/life balance” and have come to see the very notion of “leisure” not as essential to the human spirit but as self-indulgent luxury reserved for the privileged or deplorable idleness reserved for the lazy. My year of saying yes to everything [ TED Talk : Shonda Rhimes ] The Hum of the Universe: Shonda Rhimes on Creative Burnout, the Hamster Wheel of Success, and Reclaiming Who We Are from the Workaholic Grip of What We Do.

By Maria Popova “One must be something in order to do something,” Goethe counseled a young friend in 1824. 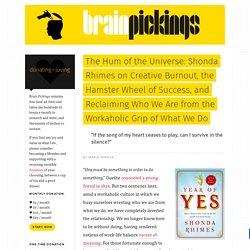 But two centuries later, amid a workaholic culture in which we busy ourselves wresting who we are from what we do, we have completely inverted the relationship. We no longer know how to be without doing, having rendered notions of work-life balance vacant of meaning. For those fortunate enough to have a so-called “dream job” — more often than not, driven personalities animated by uncompromising motivation — the paradox can be even more disorienting: While being your own boss grants tremendous freedoms, it also means that in walking this path of your own making, you are taking marching orders from the most demanding, most critical, most merciless boss possible.

It’s talk all the more moving in the context of a central pillar of Rhimes’s identity — her self-admitted marrow-deep introversion. The Mental Load. Addictions at Work. How to Break Your Addiction to Work. For many of us, working simply feels good. 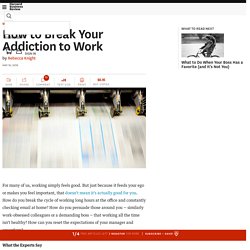 But just because it feeds your ego or makes you feel important, that doesn’t mean it’s actually good for you. How do you break the cycle of working long hours at the office and constantly checking email at home? How do you persuade those around you — similarly work-obsessed colleagues or a demanding boss — that working all the time isn’t healthy? How can you reset the expectations of your manager and coworkers? What the Experts Say In a society “where work is considered morally worthy,” being a workaholic might not seem like a serious problem, says Mary Blair-Loy, a sociologist and the founding director of the Center for Research on Gender in the Professions at the University of California, San Diego. Redefine success Start by rethinking how you define success. Refocus your attention Next, you need to step back and reflect on how you want to spend your time and energy. Hide your smartphone. Principles to Remember Do: Don’t: Addictive Behavior.