Lasting Relationships Rely On 2 Traits. Every day in June, the most popular wedding month of the year, about 13,000 American couples will say “I do,” committing to a lifelong relationship that will be full of friendship, joy, and love that will carry them forward to their final days on this earth.

Except, of course, it doesn’t work out that way for most people. The majority of marriages fail, either ending in divorce and separation or devolving into bitterness and dysfunction. Of all the people who get married, only three in ten remain in healthy, happy marriages, as psychologist Ty Tashiro points out in his book The Science of Happily Ever After, which was published earlier this year. Social scientists first started studying marriages by observing them in action in the 1970s in response to a crisis: Married couples were divorcing at unprecedented rates.

Text 2 Mind Map - Simple mind mapping online. The Tutulus Hairstyle: Ancient Roman Hairdressing. Althouse. Interesting Facts and Fun Facts. Anatidaephobia is the pervasive, irrational fear that, somewhere in the world, a duck is watching you. The person believes that no matter where they are or what they are doing, a duck is watching them.

The people who suffer from this phobia have suffered some sort of trauma in their lives, likely when he or she was a child. This trauma probably had to do with a duck or some sort of related water fowl, like a goose. Perhaps the person was attacked by one of these animals. Some of the symptoms of this phobia include an anxiety or panic attack. Mind Hacks. Ideas, issues, knowledge, data - visualized! Barking Up The Wrong Tree. Curious and Wondrous Travel Destinations. Swissmiss. Did renaissance women remove their body hair? Notoriously, on the wedding night of the celebrated art critic, John Ruskin and Effie Gray in 1848, Ruskin was so repelled by the sight of his bride’s body that he was unable to consummate the marriage. 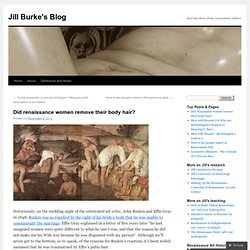 Effie Gray explained in a letter of five years later “he had imagined women were quite different to what he saw I was, and that the reason he did not make me his Wife was because he was disgusted with my person”. Although we’ll never get to the bottom, so to speak, of the reasons for Ruskin’s reaction, it’s been widely assumed that he was traumatised by Effie’s pubic hair. And, frankly, no wonder. For an English male art historian of the nineteenth century, steeped in the classical tradition and Italian Renaissance art, the expected female body would surely have been completely hairless.

But how did these pictures interact with the way women treated their own bodies? The Fox Is Black. Dec 2006. 12-31-06: its flyin aint it Share this comic: 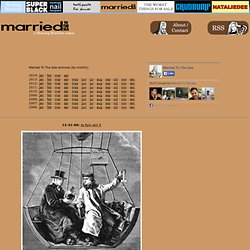 Silvanas kitchen : Recipes for gluten-free baking and cooking » Cooking for Isaiah: Gluten-Free & Dairy-Free Recipes for Easy, Delicious Meals. What will we discover today? Scarlet Lounge by AylaMeya33. Paper-Back Planters: Recycling Books to Pot Indoor Plants. Have books finally met their match with the Apple iPad, or is it just another fad like the Amazon Kindle? 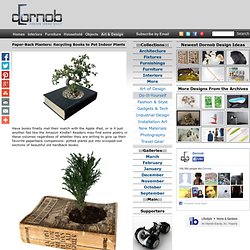 Readers may find some poetry in these volumes regardless of whether they are willing to give up their favorite paperback companions: potted plants put into scooped-out sections of beautiful old hardback books. Gardenkultur (via Inhabitat) makes a simple recycling project out of even the most complex novels, but carving into the heart of a book, sealing off the resulting space and putting seeds of little trees or other plant life into the curved void. Of course, this would work just as well as a do-it-yourself gardening project for those green-thumbed enough to provide proper moisture barriers for their own plants.

But if a picture is said to be worth one thousand, at how many words do we value a wee plant? Hopefully these books were beyond repair and those ripe only for reuse. My $750 Bread Making Machine. Some consumer products become the butt of many jokes, because they are often bought in a fit of good intentions, but then discarded almost immediately. 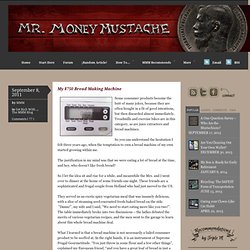 Treadmills and exercise bikes are in this category, as are juice extractors and bread machines. So you can understand the hesitation I felt three years ago, when the temptation to own a bread machine of my own started growing within me. The justification in my mind was that we were eating a lot of bread at the time, and hey, who doesn’t like fresh bread? So I let the idea sit and rise for a while, and meanwhile the Mrs. and I went over to dinner at the home of some friends one night. These friends are a sophisticated and frugal couple from Holland who had just moved to the US. They served us an exotic spicy vegetarian meal that was insanely delicious, with a slice of steaming seed-encrusted fresh-baked bread on the side. ”Damn!”

What I learned is that a bread machine is not necessarily a failed consumer product to be scoffed at. BUT WAIT!! Strange Wonderful Things.  fashion, sewing, and more. Totally Ready - Articles. The Best Daily Deals in Orlando - Up to Two Hours of House Cleaning and Maid Service. Seth's Blog. The Minimalists. Better Living Through Uncertainty. 3×5. Challenging Authority Since 1978 I am a writer, traveler, and entrepreneur with the goal of visiting every country in the world while connecting with other world-changers. 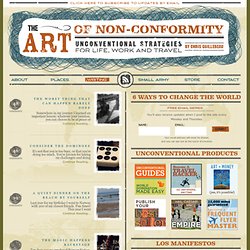