Why winning doesn't always equal success. Here’s How You Can Create Leaders in Your Team. A Guide To Ensuring Employee Accountability. Guest Post by Andre Lavoie Think back to the elementary school lunchroom. 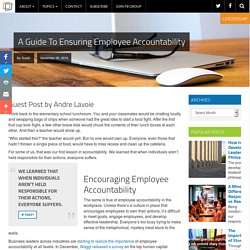 You and your classmates would be chatting loudly and swapping bags of chips when someone had the great idea to start a food fight. After the first fruit cup took flight, a few other brave kids would chuck the contents of their lunch boxes at each other. And then a teacher would show up. “Who started this?” David Rock's SCARF Model - Career Skills From Mindtools.com. © GettyImagescoldsnowstorm Enhance the "feel-good factor" by maximizing your people's reward response. 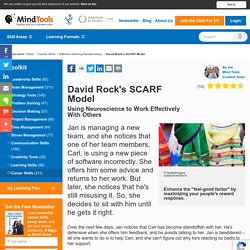 Jan is managing a new team, and she notices that one of her team members, Carl, is using a new piece of software incorrectly. To Be an Exceptional Boss, Here Are 11 Things You Must Give Your Employees. Think about a boss you truly respected. 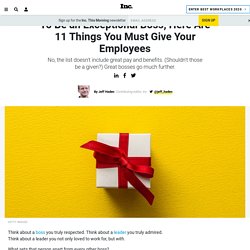 How to Tell Leaders They’re Not as Great as They Think They Are. Executive Summary Although leadership talent is normally distributed, 80% of people think they are better-than-average leaders. 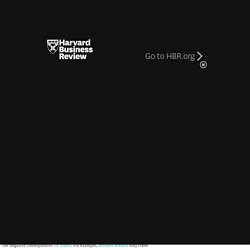 Overconfidence on the part of a leader can put their followers at risk in the long run. How to Give and Receive Feedback About Creative Work. Executive Summary Feedback is crucial for learning and improving, but it’s rarely fun to be on the receiving end of it when it’s critical. 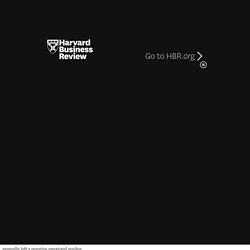 This is particularly tricky when it comes to creative work, which requires direction that can build up ideas, rather than critiques that can tear it down. Research shows two things are critical: asking for broad feedback out of curiosity and offering feedback based on subjectivity. Importantly, managers need to understand that their opinions provide only potential trajectories a creative worker might try — not the “right” road to take.

How to Give Feedback People Can Actually Use. Executive Summary Most of the feedback we receive isn’t actually very useful. 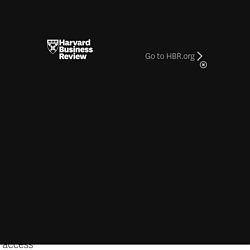 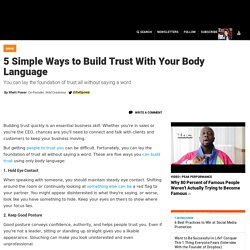 Whether you're in sales or you're the CEO, chances are you'll need to connect and talk with clients and customers to keep your business moving. But getting people to trust you can be difficult. Fortunately, you can lay the foundation of trust all without saying a word. These are five ways you can build trust using only body language: 1. When speaking with someone, you should maintain steady eye contact. One-on-Ones Part 1. Former Googler Lets Us In On The Surprising Secret To Being A Good Boss. Kim Scott has built her career around a simple goal: Creating bullshit-free zones where people love their work and working together. 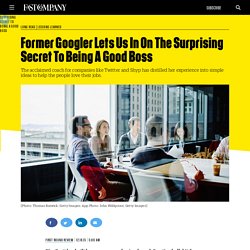 She first tried it at her own software startup. Then, as a long-time director at Google, she studied how the company’s leaders created an environment where the joy that people took in their work felt almost tangible. As a faculty member at Apple University, Scott learned how Apple takes a different path but is equally committed to creating the conditions where people can do the best work of their careers and love doing it.

Along the way, she managed a lot of teams in various states of euphoria and panic. The 7 Things Successful People Never Say. Solu Machines - Change Can Happen (with Paleface) GDC Microtalk: Brian Sharp - 'Difficult Conversations With Colleagues' Effective Feedback: The Little Known Secret To Pixar’s Creative Success. With 15 Academy Awards and an average worldwide gross of over $600 million per film, Pixar might just be the most successful creative enterprise ever—and one of the most profitable. 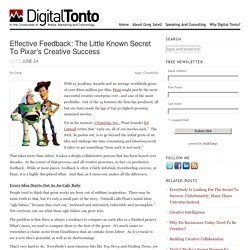 Out of the 14 features the firm has produced, all but one have made the list of top 50 highest grossing animated movies. Yet in his memoir, Creativity, Inc. Getting to Trust and Ownership  I want to start the leadership equivalent of a twelve-step program. 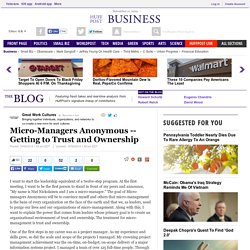 At the first meeting, I want to be the first person to stand in front of my peers and announce, "My name is Niel Nickolaisen and I am a micro-manager. " The goal of Micro-managers Anonymous will be to convince myself and others that micro-management is the bane of every organization on the face of the earth and that we, as leaders, need to purge our lives and our organizations of micro-management.

Along with this, I want to explain the power that comes from leaders whose primary goal is to create an organizational environment of trust and ownership. The treatment for micro-management is trust and ownership. How Leaders Should React When Someone Disappoints. Can you ignore your weaknesses? It might seem counter-intuitive, but sometimes the best thing to do about a weakness is simply to ignore it. And if we explore the notion of strengths-focused leadership, the reasons for this quickly become apparent.

Focus on the Good Practices, Not the Bad Ones — StackStreet. 5 Business Payoffs For Being An Effective Coach. Why Being A Mentor Is Worth The Effort. There is a common phrase in medical education that covers all of the steps of successful learning: "See one, do one, teach one. " First, you observe someone else performing a process. Then, you learn to do it yourself. Finally, you pass your knowledge on to others. The third part of this process—teach one—does not get enough attention in business contexts. In particular, when we talk about mentorship, we usually focus on the benefits of having good mentors as you move forward in your career.

Learning By Teaching. 4 Management Styles for Giving Feedback. My style for giving feedback is one of positive praise. I say things like, “Great walking, Oliver!” And “Thanks for carrying your spoon to the table, Jack!” Dozens of times each day. Positive praise is where you tell children exactly what they’ve done that you are pleased with instead of simply saying, “Well done!” 3 Engagement-Enhancing Conversations Every Manager Should Have.

That's one thing Ubisoft Toronto head Jade Raymond would like to see changed, she told GamesIndustry International last week at the studio's first UbiGallery competition, where recent art graduates from Ontario schools showcased their work in the hopes of earning a three-month apprenticeship with the developer. The three things you always have. Harnessing the Power of Feedback Loops. Onboarding and Mentoring: how to create a monster (contributor) Your Employees Want the Negative Feedback You Hate to Give - Jack Zenger , and Joseph Folkman. By Jack Zenger and Joseph Folkman | 1:00 PM January 15, 2014 Would you rather hear positive feedback about your performance or suggestions for improvement? Life, Liberty, and the Pursuit of Agility » Blog Archive » My First Job Spoiled Me.