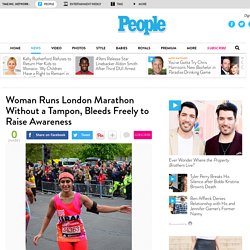 Stonewall Star and Director Address Whitewashing and Trans Erasure Concerns; Critics Less Than Satisfied. There’s been a lot of backlash after the first images and trailer for the upcoming film, Stonewall, were released. 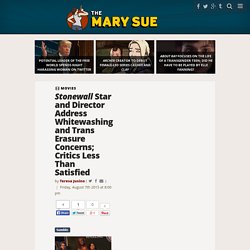 Some have even taken to creating petitions asking people to boycott the film in favor of other films that they feel do a better job of reflecting the contributions of trans women and people of color (and trans women of color) to the historic event. Stonewall director, Roland Emmerich; star, Jeremy Irvine; and writer, Jon Robin Baitz have responded to the criticism, but some critics aren’t entirely happy with the response. Roland Emmerich posted the following statement on his Facebook page yesterday: Stonewall star, Jeremy Irvine, also took to Facebook to make a statement about the backlash: And lastly, writer Jon Robin Baitz made a statement about the film vs. the marketing of the film: 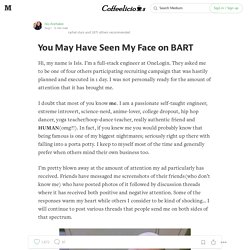 I’m a full-stack engineer at OneLogin. They asked me to be one of four others participating recruiting campaign that was hastily planned and executed in 1 day. I was not personally ready for the amount of attention that it has brought me. #Ilooklikeanengineer, le cri du coeur des filles ingénieures contre le sexisme. Victime de commentaires sexistes alors qu’elle posait pour une campagne de recrutement de son entreprise, Isis Wanger, une ingénieure américaine, a décidé de réagir. 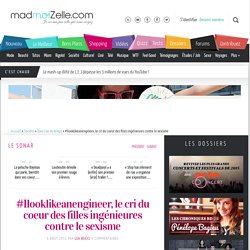 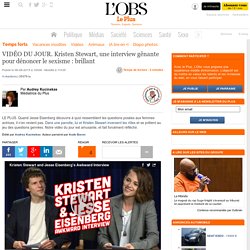 John Green Defends Cara Delevingne Over Sexist Interview Questions. That awful Cara Delevingne interview is a master class in sexist BS. Here’s a pro-tip: If you’re interviewing a famous celebrity—or anyone at all, ever—it’s best to get their name right. 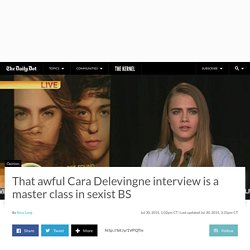 Yesterday, the hosts of Good Morning Sacramento secured their place in the burn books of John Green fans everywhere when they interviewed “Carla” Delevingne. You likely know her as Cara Delevingne, the ubiquitous model and star of Paper Towns, the latest entry in Hollywood’s YA-industrial complex. The interview itself is a case study in how to be condescending to women—even if you’re also female. Throughout the segment, the panel doesn’t just get her name wrong: They continually minimize her (rather impressive) accomplishments. Instead of congratulating her on being in seven (!) While The View’s increasingly reprehensible Whoopi Goldberg (seriously, what happened to you?) Cara Delevingne Awkward Interview With Good Day Sacramento Anchors (FULL) Kristen Stewart and Jesse Eisenberg Rip on Sexist Interviews for American Ultra. My Indian Parents Are Huge Fans of Cultural Appropriation, Even While My Generation Finds it Appalling - xoJane.

I have never been a fan of yoga, yet I gave it a fighting chance, partly because I felt it was my cultural duty to do so. 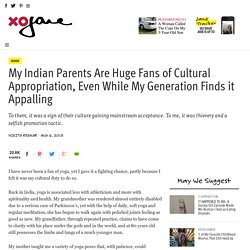 Back in India, yoga is associated less with athleticism and more with spirituality and health. My grandmother was rendered almost entirely disabled due to a serious case of Parkinson’s, yet with the help of daily, soft yoga and regular meditation, she has begun to walk again with polished joints feeling as good as new. My grandfather, through repeated practice, claims to have come to clarity with his place under the gods and in the world, and at 80 years old still possesses the limbs and lungs of a much younger man. My mother taught me a variety of yoga poses that, with patience, could function in lieu of medicine: stretches to alleviate menstrual pain, postures that helped with digestion, and repetitive chants to build memory and increase focus.

Huffingtonpost. Whitewashing History: Stonewall Movie Leaves Out Trans Women and Black Drag Queens Who Started The Movement. Watching history repeat itself before your very eyes can be a bit taxing. 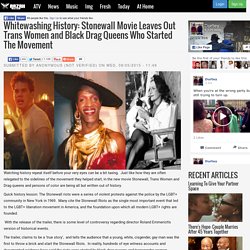 Just like how they are often relegated to the sidelines of the movement they helped start, in the new movie Stonewall, Trans Women and Drag queens and persons of color are being all but written out of history. Quick history lesson: The Stonewall riots were a series of violent protests against the police by the LGBT+ community in New York in 1969. Many cite the Stonewall Riots as the single most important event that led to the LGBT+ liberation movement in America, and the foundation upon which all modern LGBT+ rights are founded.

With the release of the trailer, there is some level of controversy regarding director Roland Emmerich’s version of historical events. The trailer, claims to be a ‘true story’, and tells the audience that a young, white, cisgender, gay man was the first to throw a brick and start the Stonewall Riots. Following the protests, Marsha took a pioneering role in the movement. BOYCOTT 2015 "STONEWALL" MOVIE. To all considering watching the newest whitewashed version of queer history, It is time that black and brown transwomyn and drag queens are recognized for their efforts in the riots throughout the nation. 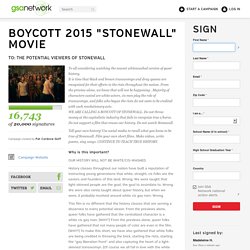 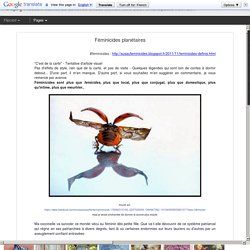 Newsweek. Jennifer Aniston mariée à Justin Theroux : un soulagement médiatique sexiste et révoltant. Ils sont quand même mignons, Jennifer Aniston et Justin Theroux, non ? The Fake Courage of Caitlyn Jenner. I believe it was Shakespeare who said “a dick by any other gender is still a dick,” and now we have Caitlyn-formerly-Bruce Jenner to “live out her truth” and prove it. Celebrated for her “courage” by no less a moral arbiter than ESPN itself, lionized even by Diane Sawyer, the slow-witted ex-Olympian–who of course has absolutely no idea what true courage it takes to survive one day of homelessness in America—has created a sad little furor by telling her girlfriends on TV that those bums on the street, those war veterans and street kids and whatnot, don’t want to work because they’re too happy getting government handouts.

Well, penises come and penises go, but bad taste is timeless, I guess. While she revels in her expensive new state-of-the-art breasts, the Marie Antoinette of transgenders has done us all a favor by revealing just how shallow, venal and corrupt her kind of “courage” really is, and how gullible the media figures who celebrate her. Les gynécologues déclarent la guerre aux sages-femmes. Ce n'est pas une déclaration de guerre, disent-ils, mais ça y ressemble pourtant furieusement. Fat people don't need 'empowerment', they just need to lose weight. And on the face of it, this all sounds very modern, PC and touchy-feely: after all, with the possible exception of football referees, nobody should ever be abused because of their weight, right? The “fat acceptance” movement started (of course) in America in the 1960s, where it campaigned for the rights of fat people to be treated equally both socially and legally. The cause really gathered, erm, weight, in the 1990s when several American airlines proposed to start charging obese customers double on flights as they took up two seats – a move that was loudly condemned and quietly dropped.

Until the 1990s, society viewed obesity solely as a behavioral disorder: overweight individuals lacked willpower and self-control. Then in 1994, Jeffrey Friedman, of Rockefeller University, made a genetic link, picking up on earlier groundbreaking work in the early 1970s by Douglas Coleman on obese mice. Thus the reasoning “it’s my genes” or, more pertinently, “it’s not my fault” gained traction. I smiled at a woman. This means I'm a sexist. If you feel the urge to pour a large gin – even before lunch – I’m with you, but bear with me – it gets better. In the study, 27 mixed-sex pairs of American students were observed as they played a trivia game. You read that right. Nobody had non-consensual sex, was bashed on the head or drugged. 7 Trans Media Tropes That Need to Stop.

Fatima Benomar. Carte de résistante. Sexy Teresa Palmer Flirtatious Fun Interview with Craig Ferguson. I Have An Invisible Illness – Here's Why You Shouldn't Tell Me I Look Good. Sans titre. A psychologist recently investigated what your facial expressions say about you, especially "resting bitch face. " Psychologist Susan Krauss Whitbourne questioned why only women suffer from this condition. Men are more respected when they appear thoughtful. But women who don't smile automatically appear cold, according to the theory. If you think it's impossible to control your facial expressions, it’s partly true. Female Novelist Learns How Far a Male Pen Name Can Take Her. There is a gender bias in the publishing industry.

Women’s writing often gets talked about differently, reviewed differently (if at all), and the content judged differently than writing by men. Of course, publishing is only one industry in which unconscious bias about names based on gender or race exists, and there have been studies done to explore this in other industries. In the case of publishing, a female novelist by the name of Catherine Nichols decided to try an experiment.

For those unfamiliar with the process, generally publishing houses don’t accept unsolicited manuscripts, which means that the first thing a writer needs to do is get an agent interested in their work, and that agent then shops the manuscript around to publishers. Sans titre. An Algerian man has reportedly sued his wife after waking up on the day after their marriage to find her barefaced with no makeup. Emirates 247 reported that the groom took his bride to court the day after their marriage, where he accused her of not looking as pretty as she did before the wedding. The groom, who was not identified, was seeking $20,000 in damages for "psychological suffering," according to the report.

Algerian reports claimed when he first laid eyes on his au naturel wife, he didn't recognize her and even mistook her for a “thief who came to steal his apartment. " “He said he was deceived by her as she used to fill up her face with make up before their marriage,” Emirates 247 reported said, quoting a court source. “He said she looked very beautiful and attractive before marriage, but when he woke up in the morning and found that she had washed the make-up off her face, he was frightened as he thought she was a thief. " Man Suing Wife for Fraud Over Her Makeup Should Be Countersued for Fraudulently Claiming to Love Her. J'ai lu le dernier tome de «Cinquante nuances de Grey» et je suis traumatisée. 4 Tired Tropes That Perfectly Explain What Misogynoir Is – And How You Can Stop It.

Virginie Despentes, la fureur dans le sexe. Telma & Louize - 2 droles de drames - Journal. Revue d'études féministes, queer et postcoloniales. Huffingtonpost. 35 Bill Cosby Accusers Tell Their Stories. More has changed in the past few years for women who allege rape than in all the decades since the women’s movement began. Consider the evidence of October 2014, when a Philadelphia magazine reporter at a Hannibal Buress show uploaded a clip of the comedian talking about Bill Cosby: “He gets on TV, ‘Pull your pants up, black people … I can talk down to you because I had a successful sitcom.’ Yeah, but you rape women, Bill Cosby, so turn the crazy down a couple notches … I guess I want to just at least make it weird for you to watch Cosby Show reruns. GROSSE FATIGUE. I Don’t Want to Be an Excuse for Racist Violence in Charleston. Huffingtonpost. Huffingtonpost. Valider à tout prix le physique des femmes.

3 Common Feminist Phrases That (Unintentionally) Marginalize Trans Women. Suzanne Crémieux. How Excusing Tyga And Kylie Jenner's Relationship Validates The Sexualization of Young Girls. Le spéculum, inventé par un misogyne et testé sur des esclaves. There's an app that will send you an alert when you're near a spot a woman made history. Here's Why J.K. Rowling Is the Boss of All Bosses. Ma passion pour le barbecue est-elle malsaine?