Patriot Notices Walmart SLAMMING Veteran, Spots What Muslim Was Doing And Took ACTION. Here we have another story of one of our veterans, and America as a whole, being disrespected while at the same time accommodating MUSLIMS based on their [EVIL] religion. 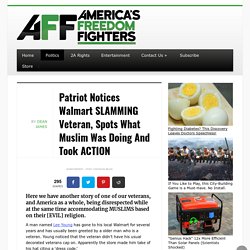 A man named Lee Young has gone to his local Walmart for several years and has usually been greeted by a older man who is a veteran. Young noticed that the veteran didn’t have his usual decorated veterans cap on. Apparently the store made him take of his hat citing a ‘dress code.’ That was bad enough but what Young saw a Muslim employee doing at the same time really got Young fired up, and it’s easy to see why. Here is Lee Young’s account of the situation posted on his Facebook page: Fitbit 'female health tracker’ attacked for not including 'non-women who menstruate' Columnist Fired for Saying There Are Two Sexes Exposes the Alarming Truth. Political correctness is destroying our free speech rights and people need to start speaking up against it. 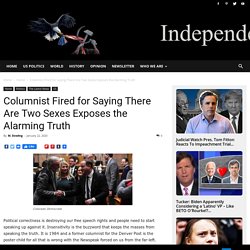 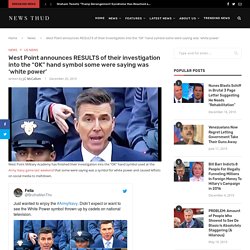 Just wanted to enjoy the #ArmyNavy. Didn’t expect or want to see the White Power symbol thrown up by cadets on national television. pic.twitter.com/GwQ27QDEGk— Fella (@BruthaManTho) December 14, 2019. Tim Allen blasts ‘alarming’ political correctness, having to explain himself to ‘thought police’ Actor and comedian Tim Allen blasted the “thought police” and condemned the “alarming” political correctness that has changed his live performances. 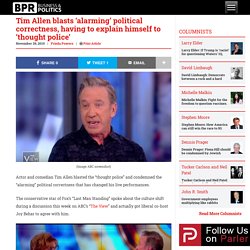 The conservative star of Fox’s “Last Man Standing” spoke about the culture shift during a discussion this week on ABC’s “The View” and actually got liberal co-host Joy Behar to agree with him. (Video: Twitter/The View) SHAPIRO: The 'Lynching' Controversy and the Death of Common Language. In the Bible, the people of Babel unite in fighting God; they decide to build a massive tower to challenge God's supremacy. 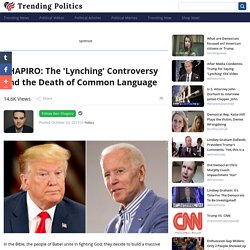 God, annoyed by their presumption, promptly causes them to speak a variety of tongues, dividing them and ending the foolhardy project. The story represents a simple truth: unity relies, at least in large part, on shared language. sponsor In the United States, we're watching our shared language disintegrate. Apparently Every Democrat In Existence Used the Term "Lynching" To Defend The Clintons. Hillary Clinton points to the audience as she is introduced at Harvard University in Cambridge, Mass., Friday, May 25, 2018. 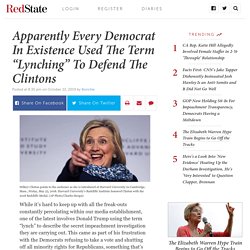 Harvard University’s Radcliffe Institute honored Clinton with the 2018 Radcliffe Medal. (AP Photo/Charles Krupa) While it’s hard to keep up with all the freak-outs constantly percolating within our media establishment, one of the latest involves Donald Trump using the term “lynch” to describe the secret impeachment investigation they are carrying out. This came as part of his frustration with the Democrats refusing to take a vote and shutting off all minority rights for Republicans, something that’s unprecedented. 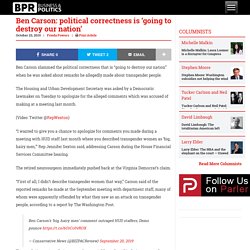 The Housing and Urban Development Secretary was asked by a Democratic lawmaker on Tuesday to apologize for the alleged comments which was accused of making at a meeting last month. (Video: Twitter @RepWexton) “I wanted to give you a chance to apologize for comments you made during a meeting with HUD staff last month where you described transgender women as ‘big, hairy men,'” Rep Jennifer Sexton said, addressing Carson during the House Financial Services Committee hearing. Massachusetts Dem files bill to ban the 'B-word' and jail repeat offenders. Responses are hilarious. Democrats have become so comfortable with controlling language in America that they are now moving to make certain words illegal. 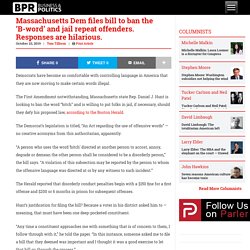 The First Amendment notwithstanding, Massachusetts state Rep. Daniel J. Hunt is looking to ban the word “bitch” and is willing to put folks in jail, if necessary, should they defy his proposed law, according to the Boston Herald. The Democrat’s legislation is titled, “An Act regarding the use of offensive words” — no creative acronyms from this authoritarian, apparently. Boston Dem Spits On Constitution, Proposes Law To Make ‘B-Word’ Illegal. Tucker Carlson Exposes 'Liberal Lunacy' - TRENDINGRIGHTWING. Just how bad and how crazy has the liberal movement of political correctness been taken? 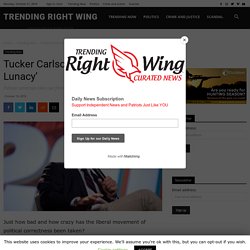 Well, consider the fact Air Canada will no longer use the term “ladies and gentlemen” when addressing passengers. In an effort to pacify those individuals that are unsure of their gender, the airline has literally outlawed its staff from using those terms and will now address passengers as “everybody” Air Canada released a statement on the issue, stating that it is making the change to “ensure an inclusive space for everyone, including those who identify with gender X.” 2020 Democrats recognize Pronouns Day. ‘Completely out of hand’: Girl, 12, handcuffed and charged with felony for pointing ‘finger gun’ in class. A 12-year-old girl was taken out of school in handcuffs after she shaped her fingers to resemble a gun and pointed at classmates. 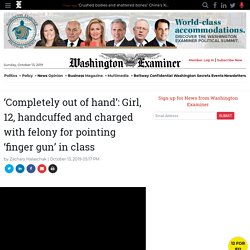 Police in Overland Park, Kansas, charged the middle school child with a felony count of threatening, according to the Kansas City Star. A person familiar with the incident report said that a student asked the girl if she could kill five people in the class who they would be. The girl responded by pantomiming a gun and pointing at four students before pointing at herself. The girl was sent to the principal’s office, but the decision to put her in handcuffs was reportedly that of the school resource officer, who works for the Overland Park Police Department.

Beloved Children's Cartoon Attacked for Racism, Violence and Cultural Appropriation by Professor. Spongebob Squarepants Declared A “Violent” & “Racist” Colonizer By College Professor – We Love Trump. University of Washington professor Holly Barker has accused the children’s cartoon character Spongebob Squarepants of being “violent” and “racist” in an academic paper called “Unsettling SpongeBob and the Legacies of Violence on Bikini Bottom.” Bikini Bottom, of course, is the town under the sea where Spongebob and friends live in the TV show, and it is based off of Bikini Atoll – a real coral reef in the Marshall Islands that was used by the U.S. military for nuclear weapons testing during the Cold War. West Virginia mayor restores city's 'Christmas Parade' after protests over name change. The mayor of West Virginia's capital city has reversed her earlier decision to rename the annual "Charleston Christmas Parade" the "Charleston Winter Parade" after protests.

Mayor Amy Goodwin announced the original name change Monday, saying it would encourage inclusivity. Nolte: ADL Adds ‘OK’ Sign, Bowl Haircuts, Anti-Antifa Logo to ‘Hate List’ American tennis player fined massive $10k for 'gun gesture' Mike Bryan — one of America’s best doubles tennis players in the history of the sport — found himself on the business end of political correctness when he engaged in “unsportsmanlike conduct” by miming a gun motion with his racket.

Yes, really. Bryan, who plays with his twin brother Bob, was levied a fine of a whopping $10,000 after the code of conduct violation. During a match with Spain’s Roberto Carballes Baena and Argentina’s Federico Delbonis, Bryan challenged a call after a lob was ruled “in.” Upon reviewing the tape, the referee decided to reverse the call. This was when Bryan pointed toward the chair umpire and lifted the racket to his shoulder, “aiming” it like a rifle. Mike Bryan (🎥@Eurosport_RU ) pic.twitter.com/vPwOiZfVqf— doublefault28 (@doublefault28) September 1, 2019 Backlash was swift, with many people calling for his banishment from professional tennis. This guy should not be allowed on a tennis court at least professionally ever again because of this— Michael A. Inclusive language: How it is changing and evolving at CSU - The Rocky Mountain Collegian. Rep. Joaquín Castro: Stop Using the Word 'Alien' in Federal Law, Signs. WASHINGTON, DC -- U.S. Rep. Joaquín Castro wants the federal government to drop the word "alien" from its laws and other official documents.

Eddie Murphy Is Returning to Stand-Up Comedy. Justin Amash Leaves House Committee After Calls From Republicans. Michigan Republican Rep. Justin Amash officially left the GOP conference and resigned from the House Oversight Committee on Monday by sending a letter to Republican leadership. “Please accept this letter as formal notification that I am withdrawing my membership in the House Republican Conference, effective immediately, for the reasons outlined in my accompanying op-ed,” Amash wrote in a letter to top lawmakers. Country Music Group Gets Booted From State Fair Lineup ... Because Of Their Name. Vice media nixes 25 words from list allowed to be blacklisted by advertisers. See what is now ‘safe.’ Conservative News Today. NBA Commissioner Announces Terminology Change in a Case of Political Correctness Gone Wild.