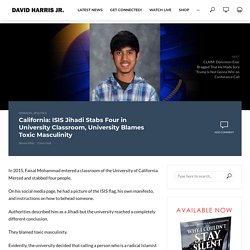 On his social media page, he had a picture of the ISIS flag, his own manifesto, and instructions on how to behead someone. Authorities described him as a Jihadi but the university reached a completely different conclusion. They blamed toxic masculinity. Evidently, the university decided that calling a person who is a radical Islamist is racist, so it had to be someone else’s fault. So, in that case, blame it on someone who is not protected by the liberal elite, men. From PJ Media Mohammad, according to the Associated Press, “planned to praise Allah while slitting the throats of classmates and use a gun taken from an ambushed officer to kill more.” The university originally blamed the attack on revenge for getting kicked out of a study group, a burned out refrigerator bulb and the heartbreak of psoriasis.

Ilhan Omar gets in over her head defending Brennan, challenges the wrong journalist. Get the latest BPR news delivered free to your inbox daily. 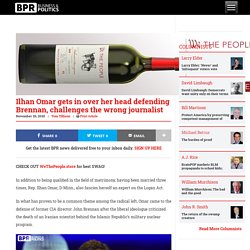 SIGN UP HERE CHECK OUT WeThePeople.store for best SWAG! In addition to being qualified in the field of matrimony, having been married three times, Rep. Ilhan Omar, D-Minn., also fancies herself an expert on the Logan Act. In what has proven to be a common theme among the radical left, Omar came to the defense of former CIA director John Brennan after the liberal ideologue criticized the death of an Iranian scientist behind the Islamic Republic’s military nuclear program.

Trump Purges Pentagon Advisory Board, Cripples Establishment's Influence on DOD. Robert DeNiro says Republicans better be afraid after Trump. Star-studded Time's Up charities spent big on salaries, not victims. Hollywood’s “Time’s Up” organization, set up to fight sexual harassment — with Reese Witherspoon, Amy Schumer, Brie Larson and other luminaries on its board — spent the bulk of its donations on executive salaries and only a fraction on legal costs to help victims, public records show. 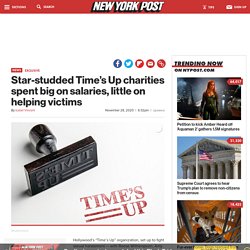 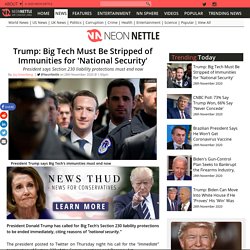 CNN: Trump's Call for Unity and Togetherness 'Could Put Vulnerable People at Risk' Rouhani vows Iran will retaliate for killing of top nuclear scientist. (AP) — Iran’s supreme leader on Saturday demanded the “definitive punishment” of those behind the killing of a scientist who led Tehran’s disbanded military nuclear program, as the Islamic Republic blamed Israel for a slaying that has raised fears of reignited tensions across the Middle East. 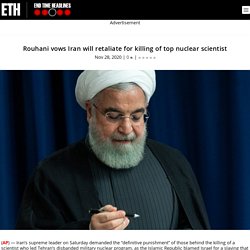 After years of being in the shadows, the image of Mohsen Fakhrizadeh suddenly was to be seen everywhere in Iranian media, as his widow spoke on state television and officials publicly demanded revenge on Israel for the scientist’s slaying. Israel, long suspected of killing Iranian scientists a decade ago amid earlier tensions over Tehran’s nuclear program, has yet to comment on Fakhrizadeh’s killing Friday. However, the attack bore the hallmarks of a carefully planned, military-style ambush, the likes of which Israel has been accused of conducting before. The Associated Press is an independent, not-for-profit news cooperative headquartered in New York City. Rouhani vows Iran will retaliate for killing of top nuclear scientist.

Huge Utah gun control advocate launches a pro-gun group. SALT LAKE CITY, UT – When Ermiya Fanaeian was 17 years old, she had co-founded the Utah outfit of March for Our Lives – one of a series of groups founded nationwide following the Parkland shooting in Florida in 2017. 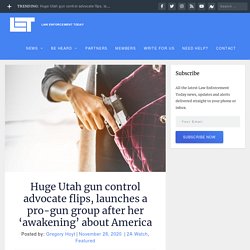 In 2018, Fanaeian aided in organizing a massive demonstrations of an estimated 8,000 protesters in Utah that demanded stricter gun controls laws. Yet in the summer of 2020, Fanaeian found herself serving as the director of the Salt Lake City chapter of Pink Pistols. "This is a form of empowerment for me," says the woman rekindling Utah’s Pink Pistols chapter. | By @kyle_dunphey Deseret News (@DeseretNews) November 28, 2020 The pro-2A organization’s mission aims to limit violence against the LGBT community by sending a message that they’re “armed”, according to the group’s Facebook page: “Pink Pistols teach queers to shoot, to defend ourselves.

Obama Throws Down The Race Card; Claims Trump Voters Motivated By White Male Victimhood. Like most Democrats, Barack Obama wears his contempt for ordinary Americans on his sleeve, especially when it comes to those who support President Trump. 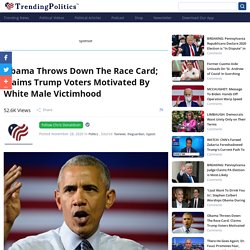 During an appearance on the nationally syndicated black radio program The Breakfast Club on Wednesday, Obama trashed Trump voters who he claimed were driven by what he referred to as white male victimhood. sponsor Download the FREE TrendingPolitics Mobile App so you never miss a Trump story The nation's 44th president continues to demonstrate that his true legacy is the toxic atmosphere of identity politics largely due to his eight years in office when decades of racial progress were set back thanks to his venomous demagoguery and exploitation of black vs. white animosity for electoral gain.

According to Mr. “What’s always interesting to me is the degree to which you’ve seen created in Republican politics the sense that White males are victims.” Employees Reportedly Cried Over Publisher's Decision to Print New Jordan Peterson Book. Some Penguin Random House employees cried during an internal meeting on Monday after the announcement that the company would be publishing a book by a controversial public figure. 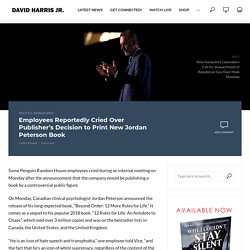 On Monday, Canadian clinical psychologist Jordan Peterson announced the release of his long-expected book, “Beyond Order: 12 More Rules for Life.” It comes as a sequel to his popular 2018 book, “12 Rules for Life: An Antidote to Chaos”, which sold over 3 million copies and was on the bestseller lists in Canada, the United States, and the United Kingdom. “He is an icon of hate speech and transphobia,” one employee told Vice, “and the fact that he’s an icon of white supremacy, regardless of the content of the book, I’m not proud to work for a company that publishes him.” The employee also identifies as a member of the LGBTQ community. He has become a defender of free speech, the ideals of traditional liberalism, and self-responsibility. The book is scheduled to be released March 2021.

DOJ Arrests Over 700 Organized Crime Members - Patriot United News. Thanks to the DOJ, over 700 hard core MS-13 gangsters are safely behind bars. 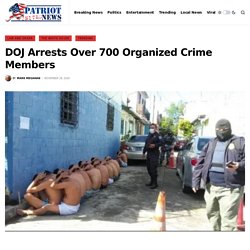 Attorney General William Barr teamed up with his Central American counterparts to announce the results of a major anti-drug, organized crime crackdown. DOJ press statement released The Department of Justice put out a press statement detailing the DOJ assistance to clean up a global organized crime syndicate which has tentacles across North and South America and affect life here in the United States. Senior law enforcement officials from El Salvador, Guatemala and Honduras have been real busy with our help to crack down hard on gangs like MS-13 and 18th Street. The number one reason that folks from Central America have been claiming asylum here in the United States, expecting to get it legally or illegally based on Barack Obama’s promises, is because life in their home countries is so darn dangerous. More than 700 members of transnational criminal organizations are in detention. 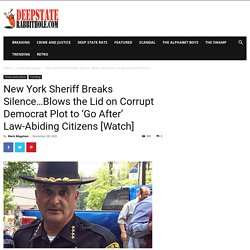 He blew his top when his so called superiors want different laws for different groups. Fox News in Full on Panic...Threatens Guests - Right Wing News Hour. Conservatives are ditching Fox News in massive numbers. The network should have seen this coming as they attempted to turn its viewers against President Trump. Now the network is desperate to remain relevant, pressuring guests to boycott their new competitors. How pathetic. Fox News is failing fast Fox News ratings are tanking after their disastrous election coverage. Jon Voight: Trump is The 'Only Man Who Can Save This Nation' On 28th November 2020 @ 9.00pm © press Conservative actor Jon Voight asserted that President Donald Trump is the only man who can save the United States. The actor also warned of what Joe Biden and his administration would bring to America if he took office.

The Hollywood star's latest message praises the President while bashes the far-left Democratic leaders. Voight warns about the prospect of a Biden administration, suggesting he wants to destroy America. Are We Witnessing Another Major Harbinger? 26 PA House Republicans call for withdrawing certification of presidential electors. A group of 26 Pennsylvania House Republicans have introduced a resolutions disputing the 2020 general election statewide results. The resolution calls for PA Governor Tom Wolf and Secretary of State Kathy Boockvar to withdraw their certification of the Nov. 3 election results in the presidential and other statewide contests.

You can read the full resolution here. Per Penn Live “the proposed resolution, if it gets introduced, has only a short life since the legislative session ends on Monday, Nov. 30. NY Times, the hate-Trump outlet, spouts Iran propaganda. The NY Times were apologists for the murderous anti-Semite Joseph Stalin, and the newspaper rallies for Chinese Communists.

Police arrest murder suspect who was the 'definition of a serial killer' DALLAS, TX – Police in Dallas, Texas announced on November 20th that they had taken a man accused of killing three people in the city into custody. Police are labeling the suspect as a serial killer. Dallas police arrest suspected serial killer – #OANN pic.twitter.com/tvdjvsNMhb— One America News (@OANN) November 22, 2020 When police responded and investigated the first murder victim, they had no idea that it was the work of an alleged serial killer. All they knew was that in that case, and three others to follow, the method seemed the same, the suspect approached a person who was walking, and shot them while he sat in the driver’s seat, then drove off while they laid on the ground dying.

Columbia Prof: Rockefeller Christmas Tree Should be Canceled for the 'Toxic Relationship' of 'Nature and Capitalism' A professor at Columbia University says that the iconic Rockefeller Center Christmas Tree should be “canceled,” because it represents a “toxic relationship shared between nature and capitalism.” (138) Father Knows Best Thanksgiving message. CNN’s Kaitlan Collins taken to the woodshed for unbelievably smug and clueless tweet. Get the latest BPR news delivered free to your inbox daily. 3 Arrested in Portland After Causing 'Thousands' Of Dollars In Damage to Businesses.

Another 33 percent said Trump’s policies — tariffs on foreign imports, immigration reduction, and opposition to foreign interventionism — should be continued as the main goals of the Republican Party with “a more disciplined personal style.” EXCLUSIVE – Incoming GOP Rep. Nicole Malliotakis: Anti-Socialist Freshman Class Here to 'Preserve America' The high number of freshmen Republican members of Congress coming into the job with personal or family experiences of socialism will use that background to protect the “unlimited potential and opportunity” that America offers, Congresswoman-elect Nicole Malliotakis (R-NY) told Breitbart News in a recent interview.

Malliotakis soundly defeated incumbent Max Rose (D-NY) in a year in which far-left American politicians, many also from New York, have attempted to shift the political conversation towards openly socialist policies. Portland Antifa Attack BLM-Supporting Grocery, War Memorial. An Antifa group in Portland, Oregon, called for a Thanksgiving Eve attack on “symbols and structures of colonialism and capitalism.”