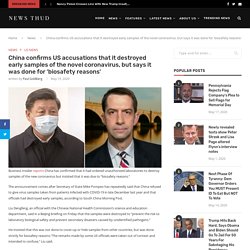 The announcement comes after Secretary of State Mike Pompeo has repeatedly said that China refused to give virus samples taken from patients infected with COVID-19 in late December last year and that officials had destroyed early samples, according to South China Morning Post. Liu Dengfeng, an official with the Chinese National Health Commission’s science and education department, said in a Beijing briefing on Friday that the samples were destroyed to “prevent the risk to laboratory biological safety and prevent secondary disasters caused by unidentified pathogens.” He insisted that this was not done to cover-up or hide samples from other countries, but was done strictly for biosafety reasons.”The remarks made by some US officials were taken out of context and intended to confuse,” Liu said. 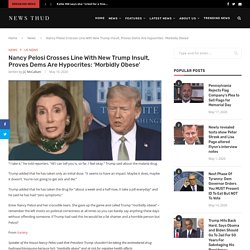 “All I can tell you is, so far, I feel okay.” Trump said about the malaria drug. Trump added that he has taken only an initial dose. “It seems to have an impact. Maybe it does, maybe it doesn’t. Trump added that he has taken the drug for “about a week and a half now, II take a pill everyday” and he said he has had “zero symptoms.” Enter Nancy Pelosi and her crocodile tears. From Variety: Speaker of the House Nancy Pelosi said that President Trump shouldn’t be taking the antimalarial drug hydroxychloroquine because he’s “morbidly obese” and at risk for negative health effects Pelosi made the comments on Monday night while speaking to Anderson Cooper on CNN.

“He’s our president and I rather he not be taking something that has not been approved by the scientists, especially in his age group and his — shall we say weight group — morbidly obese, they say. (2201) OK, Karen! □‍♀️ More Doctors Speak Out AGAINST Face Masks. Watch Meghan McCain Unload On Her Co-Hosts. COVID-19: Doctors Fear For Their Freedom Of Expression. Published on May 19, 2020 Written by NoTricksZone The COVID-19 pandemic has exposed how scientific dissent is not only being suppressed and marginalized in Germany when it comes to climate science but with virology and public health. 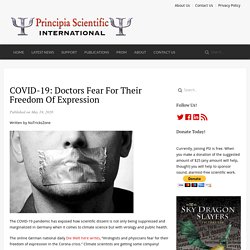 The online German national daily Die Welt here writes, “Virologists and physicians fear for their freedom of expression in the Corona crisis.” Climate scientists are getting some company! Scientific freedom “under threat” Citing the results of a recent survey, to Die Welt reports “many experts believe that freedom of expression in science is under threat” and “virologists have begun to change their attitude towards the measures taken by the German government.” As the economy reels from the stringent restrictions enacted by authorities across Europe, the discussion about how to respond to the spread of the virus has become bitter.

BREAKING: Trump sends scathing letter to Dr. Tedros of the WHO, Threatens Withdrawal. Monday evening, President Trump tweeted: This is the letter sent to Dr. 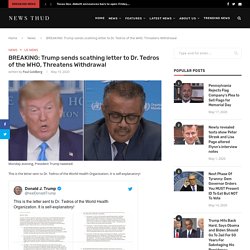 Tedros of the World Health Organization. Germany Slams 'Right Wing Extremists' After Antifa Tries to Murder Lockdown Protester. On 19th May 2020 @ 12.00pm © press German authorities have slammed "right-wing extremists" after an anti-lockdown protester was left in a coma over the weekend following a violent attack by a group of Antifa thugs, according to reports. 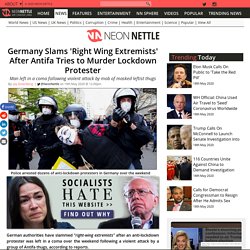 Three men at a protest in Stuttgart were reportedly attacked by a group of masked leftists in what is believed to be an attempted murder. India: Standing up to China in the Post-Coronavirus World. As coronavirus leaves behind a trail of human suffering and economic devastation, nations across the world have begun asking critical questions about the global pandemic. 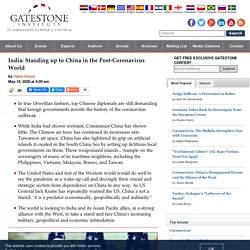 Countries are enquiring into Communist China's handling of the pandemic, which first appeared late last year in the central Chinese city of Wuhan. As early as January 14, China had used the World Health Organization (WHO), a United Nations agency, to spread disinformation about the human-to-human transmissibility of Covid-19, a remark that led US National Security Advisor Robert O'Brien later to call the WHO a "tool of Chinese propaganda. " While U.S. President Donald J. Trump faced mostly undeserved, politicized criticism for questioning China's culpability in the spread of the worldwide pandemic and his calls for an international probe into it, more and more capitals across the Western world are making similar demands.

At the moment, it is unclear if China's charm offensive, if one could call it that, is working. The new Shep Smith? Neil Cavuto gins up panic over Trump taking hydroxychloroquine: 'This will kill you!' President Donald Trump dropped a bomb of sorts Monday at the White House when he told reporters that he has been taking the anti-malaria drug hydroxychloroquine for about a week and a half to ward off COVID-19. 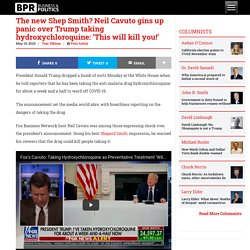 The announcement set the media world afire, with breathless reporting on the dangers of taking the drug. Fox Business Network host Neil Cavuto was among those expressing shock over the president’s announcement. Doing his best Shepard Smith impression, he warned his viewers that the drug could kill people taking it. “That was stunning,” Cavuto said of the announcement. Newsom: California could host pro sports as early as June, without fans in stands. Get all the latest news on coronavirus and more delivered daily to your inbox. 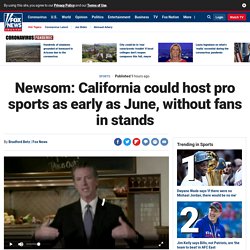 Sign up here. California Gov. Gavin Newsom on Monday announced that professional sports could begin in June without spectators if the state’s number of coronavirus cases continues to decline. The NBA, NHL, MLB and other sports franchises suspended their seasons in mid-March as coronavirus deaths began to climb in the U.S. The Democratic governor qualified that the early June timeline was preliminary. “In terms of protecting not only the players but more broadly their support staff,” Newsom said. Maxine Waters Says Trump Only Cares About ‘White Power Pep Rallies’ Frank Gaffney: Make the Chinese Communists Play by Our Rules.

One of the dirtiest little secrets about the Chinese Communist Party (CCP) and its success in amassing immense power to oppress its own people and increasingly to threaten ours has just been exposed by President Donald Trump: We have been underwriting and, thereby, enabling it. 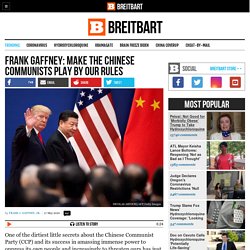 In a decision last week, Mr. Trump – to his great credit – made plain this outrage and took a vital first step towards ending it. Now, we must finish the job. The urgently needed impetus to do that was provided when Donald Trump intervened personally to prevent the federal Thrift Savings Plan (TSP) from investing an estimated $4.5 billion in CCP companies currently registered in, and transferring immense wealth from, our capital markets to pay for their activities on behalf of “the motherland.”

Other CCP corporations selling stocks and bonds on Wall Street build weapons designed to kill our men and women in uniform. Eric Trump Claims Social Distancing Is a Democrat 'Strategy' Listening to the Coronavirus 'Experts' Has Led to Death and Despair. On April 21st the Washington Post savaged Georgia governor Brian Kemp’s decision to begin opening his state after locking down for weeks. 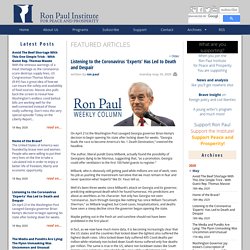 “Georgia leads the race to become America’s No. 1 Death Destination,” sneered the headline. The author, liberal pundit Dana Milbank, actually found the possibility of Georgians dying to be hilarious, suggesting that, “as a promotion, Georgia could offer ventilators to the first 100 hotel guests to register.” Milbank, who is obviously still getting paid while millions are out of work, sees his job as pushing the mainstream narrative that we must remain in fear and never question what “experts” like Dr.

The Los Angeles Times reported that Sacramento has freed up $75 million for the fund, which could help about 150,000 who may be facing severe hardships during the pandemic. An earlier report in the paper said the Center for American Liberty is suing the state, claiming that the money is “not a slush fund for the governor to spend as he sees fit.” California opens up coronavirus funding for immigrants in state illegally, faces backlash. JUST IN: Trump’s doctor releases statement explaining why Trump is taking Hydroxychloroquine. Earlier today Trump freaked out the media world when he told them that he had been taking hydroxychloroquine for about two weeks as a preventative measure against catching the coronavirus. Since then the media’s been rife with stories about it, with many on the left claiming that Trump is lying about it.

Seriously. I’ve even seen doctors on Fox News decrying the move by Trump to take the drug and to announce it to the country. California opens up coronavirus funding for immigrants in state illegally, faces backlash. Newsom Says Congress Has a 'Moral' and 'Ethical' Obligation to Bailout States. California Governor Gavin Newsom weighed in on the question of bailing out states whose budgets have been blown up by the coronavirus pandemic.

Newsom told CNN’s “State of the Union” that a state bailout was not “charity” and that Congress has a “moral and ethical obligation” to help Americans across the country. The House passed a $3 trillion coronavirus relief bill last week which contained almost a trillion dollars to bail out states. It also contained goodies for all — another stimulus check, help for renters, college debt relief, and cash for illegal immigrants. Fox News: Donald Trump Backs Australian Demands for a Chinese Coronavirus Probe. President Donald Trump signaled support on Monday for Australia’s push for a probe into the Chinese coronavirus pandemic. “We are with them!” Trump wrote, noting that India, Japan, Britain, Canada, New Zealand, Indonesia, and Russia were among the nations supporting the probe of the World Health Organization’s failure to respond properly to the pandemic.

Australia’s demand for an investigation into the origin and the spread of the virus now has the backing of 62 nations. China has threatened Australia with trade penalties if they continue to defy the Chinese communist government. But Australia has not backed down. “Now, it would seem entirely reasonable and sensible that the world would want to have an independent assessment of how this all occurred, so we can learn the lessons and prevent it from happening again,” Australia Prime Minister Scott Morrison said in April. WATCH: Pelosi Says "Morbidly Obese" Trump Taking Hydroxychloroquine "Not a Good Idea" 'We did everything we could,' says Cuomo of nursing homes deaths.

Despite nearly 5,400 nursing home residents dead and calls growing for a probe of his policies that mandated the facilities take in coronavirus patients amid the pandemic, Gov. Andrew Cuomo insisted Wednesday that he and his officials “did everything we could” to protect the most vulnerable population. Trump threatens to keep WHO funding freeze in place after WH investigation. California’s Newsom proposes shrinking prison population to help state’s budget during coronavirus. Get all the latest news on coronavirus and more delivered daily to your inbox. Sign up here. Gov. Wisconsin governor says he's giving up on pushing for new coronavirus restrictions because GOP won't allow it. Trump blasts Fox News host with series of blistering retweets, tweet: ‘Looking for a new outlet!’

On Monday, Fox News host Neil Cavuto expressed shock after President Donald J. Trump blasts Fox News host with series of blistering retweets, tweet: ‘Looking for a new outlet!’ [VIDEO] Baltimore Police Respond To Over 128 Stay At Home Violations This Past Weekend! We told you last week that Maryland Governor Larry Hogan lifted restrictions across the state with a few exceptions, including continued social distance practicing and the wearing of facemasks. Many counties balked at that idea, telling residents the stay-at-home order was still in effect indefinitely. Over the weekend, the Baltimore Police responded to over 100 calls of citizens violating the stay-at-home order. Michigan governor issues new executive order impacting some businesses. Below is a report that DML News gives a 4 OUT OF 4 STARS trustworthiness rating.

DeBlasio warns swimmers at NYC beaches "they’ll be taken right out of the water" Trump Reveals He Is Taking Malaria Drug Hydroxychloroquine. Poll: A Third of CA Primary Care Doctors Fear Their Practices Won’t Survive. Fox News Replies To Lawsuit’s Claim That The Network Doesn’t Have First Amendment Rights. Fears of global trade war with China after Beijing slaps an 80 per cent tariff on Australian exports.