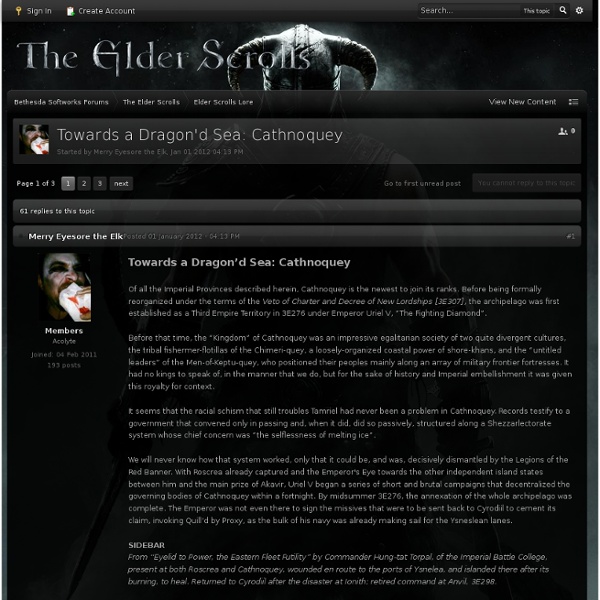 Towards a Dragon’d Sea: Cathnoquey Of all the Imperial Provinces described herein, Cathnoquey is the newest to join its ranks. Before being formally reorganized under the terms of the Veto of Charter and Decree of New Lordships [3E307], the archipelago was first established as a Third Empire Territory in 3E276 under Emperor Uriel V, “The Fighting Diamond”. Before that time, the “Kingdom” of Cathnoquey was an impressive egalitarian society of two quite divergent cultures, the tribal fishermer-flotillas of the Chimeri-quey, a loosely-organized coastal power of shore-khans, and the “untitled leaders” of the Men-of-Keptu-quey, who positioned their peoples mainly along an array of military frontier fortresses. It seems that the racial schism that still troubles Tamriel had never been a problem in Cathnoquey. We will never know how that system worked, only that it could be, and was, decisively dismantled by the Legions of the Red Banner. ANNOTATOR'S NOTEI was delighted to hear that Cmdr.

Llénnöcöcönnèll, the Anachronisle - Elder Scrolls Lore Llénnöcöcönnèll, the Anachronisle An island at the southernmost end of the Cathnoquey chain, formerly known as "Llénnöc" (Quey for "south-but-we-mean-west") when it was an independent state during the Second Empire. After the famous surrender of Akaviri forces at Pale Pass to Reman Cyrodiil, Llénnöc was quickly annexed as Imperial territory to help facilitate the capture of any Tsaesci military-leaders seeking to evade their failed invasion by means of the north-but-really-east sea straits. When no such nets bore fruit-- perhaps since the Tsaesci indeed never invaded by sea and therefore did not use it for retreat-- the Imperial Dracocryptography & Authentifications Congress petitioned to the Elder Council that the native government be further reorganized "to alleviate the sleeve-strain of invaluable but atrophying memospores". The Empire has never relinquished its holdings on the Anachronisle.

Cyrodiil Author: Imperial Geographical Society Cyrodiil, Dragon Empire, Starry Heart of Nirn, and Seat of Sundered Kings... Indeed, if the history of the Nords is the history of humans on Tamriel, then Cyrodiil is the throne from which they will decide their destiny. It is the largest region of the continent, and most is endless jungle. Its center, the grassland of the Nibenay Valley, is enclosed by an equatorial rain forest and broken up by rivers. Cyrodilic history truly begins by the middle of the Alessian Reformation (see sidebar, Alessian Order), when civilization and cultivation had allowed the region to emerge as a discernible Tamrielic power. Traditionally, the East is regarded as the region's soul: magnanimous, tolerant, and administrative. The West is respected as Cyrodiil's iron hand: firm, unwavering, and ever-vigilant. Cyrodiil in the Third Empire is the young, vital embodiment of its ancient heritage. Alessian Order The Second Empire The Song of Tiber Septim5 From the Odes: 1. *.

The Story of Lysirius In ancient times, there lived a hero named Lyrisius. He fought agains the Akaviri slavetraders and single-handedly slew hundreds. Despite his valor, Lyrisius' army was routed and scattered to the four winds. Lyrisius fled into the moors to escape the Akaviri chariots. Far from the lands of men, Lyrisius entered the blasted lands. At the heart of this forsaken landscape, he met the wyrm. The wyrm intended to devour Lyrisius when the hero offered to be its slave and manservant. Indeed, centered between the great wings of the creature was a dull scale, clearly out of reach of its long neck. Once astride the great lizard, Lyrisius slid his dagger underneath the scale and into the tender flesh of the beast. Seeing that Lyrisius could not be shaken free, the wyrm demanded that he remove the stinging blade. With a great roar, the scaled creature set off. "I have done as you bid. Legend has it that the wyrm still lives, though this happened in the first era long, long ago.

Mysterious Akavir Akavir means "Dragon Land". Tamriel means "Dawn's Beauty." Atmora means "Elder Wood". Akavir is the kingdom of the beasts. There are four major nations of Akavir: Kamal, Tsaesci, Tang Mo, and Ka Po' Tun. Kamal is "Snow Hell". Tsaesci is "Snake Palace", once the strongest power in Akavir (before the Tiger-Dragon came). Tang Mo is the "Thousand Monkey Isles". Ka Po' Tun is the "Tiger-Dragon's Empire". "First," Tosh Raka says, "is that we kill all the vampire snakes."

Report: Disaster at Ionith Report of the Imperial Commission on the Disaster at Ionith by Lord Pottreid, Chairman Part I: Preparations The Emperor's plans for the invasion of Akavir were laid in the 270s, when he began the conquest of the small island kingdoms that lie between Tamriel and Akavir. With the fall of Black Harbor in Esroniet in 282, Uriel V was already looking ahead to the ultimate prize. When Prince Bashomon yielded Esroniet to Imperial authority in 284, the Emperor's full attention could be devoted to planning for the Akaviri campaign. Meanwhile the Emperor was gathering his Expeditionary Force. It should be noted here that the Commission does not find fault with the Emperor's preparations for the invasion. Part II: The Invasion of Akavir The Expeditionary Force left Black Harbor on 23rd Rain's Hand, 288, and with fair weather landed in Akavir after six weeks at sea. The Emperor now sent out envoys to try to contact the Tsaesci king or whoever ruled this land, but his messengers never returned.

The Tsaesci Creation Myth And we ate it to become it Author: Michael Kirkbride There was the Striking, and the Egg was split into twelve worlds, one for each serpent who had a name, and the names of the serpents were alive and coiled into themselves and became more eggs, for names are self-maters, and the Naming went and went. According to the calculations, the random sequence learned very cunningly that fragmentation reserved itself to the left eye. Variation realms were the evidence needed. There was the Biting, which broke the twelve worlds and their name-eggs, and the Biters chewed new names of the lesser serpents until soon death was known to the smallest and your alphabets disappeared but ours did not. There was the Shedding, who inflated into a sphere of edible communications and this is how the sequence began to find proportion again. The Reaching came, where movements of dai progressed across islands of edible communication and food-forms could stockpile.

2920, Last Year of the First Era Frostfall Book Ten of 2920, The Last Year of the First Era by Carlovac Townway 10 Frostfall, 2920 Phrygias, High Rock The creature before them blinked, senseless, its eyes glazed, mouth opening and closing as if relearning its function. A thin glob of saliva burbled down between its fangs, and hung suspended. "My child," she crowed. It took Turala a moment to recall whether she was thinking anything at all. "I was thinking of the color red," Turala said, concentrating. "Desire is a powerful force for a young witch," said Mynistera. Turala closed her eyes and spoke the dismissal invocation. "I never would have believed it, a month and a day you've been with the coven, and you're already far more advanced than most of the women here. Turala smiled. "You'll be leading the coven for many years yet, great sister," said Turala. "I certainly intend to. Turala did as she was bade. 12 Frostfall, 2920 Dwynnen, High Rock For a Middas evening, the Least Loved Porcupine tavern was wildly crowded.

History of the Fighters Guild, First Edition In the 283rd year of the 2nd Era, Potentate Versidue-Shaie was faced with a disintegrating empire. The vassal kingdoms throughout Tamriel had reached a new height of rebellion, openly challenging his rule. They refused his taxes and led sorties against the Imperial garrisons throughout the land. The next thirty-seven years were perhaps the bloodiest in the violent history of Tamriel. In order to crush the last of the royal armies, Versidae-Shaie had to sacrifice many of his best legions, as well as spend nearly every last piece of gold in the Imperial treasury. The problems that immediately surfaced were almost as staggering as the triumph itself. The only persons who benefited from the war were criminals, who preyed upon the ruins of the lawless land, without fear of arrest now that all the local guards and militia were gone. In the dawn of the year 320, a kinsman of Versidae-Shaie, Dinieras-Ves "the Iron", presented himself with a host of companions before the Potentate.

Akaviri Diary Day Three It is with a heavy heart and a trembling hand that I pen this latest entry. It has been several days since I have seen anyone else on the road from our garrison at Grey Ridge. The road is lonely and treacherous. I am rationing my supplies to prepare for a tough path ahead. Day Seven It has been two days, and I have finally arrived at Dragonclaw Rock. Day Eight After winding my way westward, I have come within sight of The Sentinel: a huge statue placed there by some unknown artist many years ago. Day Nine I am using much of my remaining strength writing this. Day Eleven This is the last entry I shall be able to write. Tsaesci Creation Myth- An Attempted Deciphering : teslore Are there any confirmed physical depictions of any Akaviri races in any of the Elder Scrolls games? : teslore