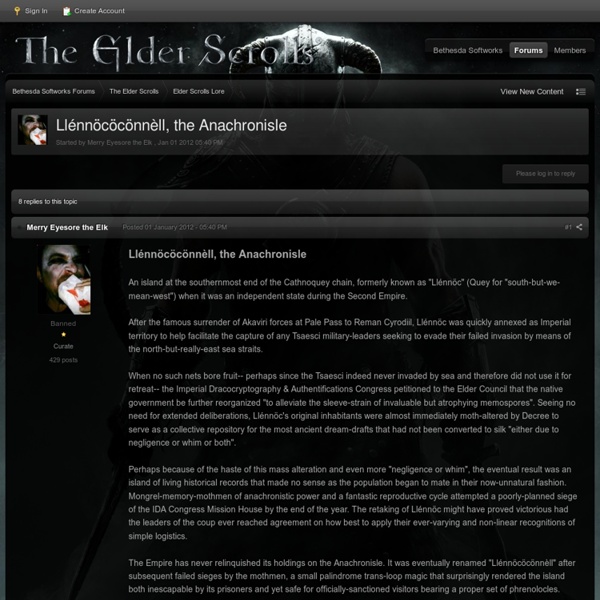 Llénnöcöcönnèll, the Anachronisle An island at the southernmost end of the Cathnoquey chain, formerly known as "Llénnöc" (Quey for "south-but-we-mean-west") when it was an independent state during the Second Empire. After the famous surrender of Akaviri forces at Pale Pass to Reman Cyrodiil, Llénnöc was quickly annexed as Imperial territory to help facilitate the capture of any Tsaesci military-leaders seeking to evade their failed invasion by means of the north-but-really-east sea straits. When no such nets bore fruit-- perhaps since the Tsaesci indeed never invaded by sea and therefore did not use it for retreat-- the Imperial Dracocryptography & Authentifications Congress petitioned to the Elder Council that the native government be further reorganized "to alleviate the sleeve-strain of invaluable but atrophying memospores". The Empire has never relinquished its holdings on the Anachronisle.

Better is a Better Word: The Lynpan March The Lynpan March If there is one noble thing to have come out of the true Empress' brief reign, it is surely her (somewhat indirect) displacement of the Lynpan March from the land of the Great Apes. Perhaps "noble" is the wrong word; "better" is the better word. Towards a Dragon'd Sea: Cathnoquey - Elder Scrolls Lore Towards a Dragon’d Sea: Cathnoquey Of all the Imperial Provinces described herein, Cathnoquey is the newest to join its ranks. Before being formally reorganized under the terms of the Veto of Charter and Decree of New Lordships [3E307], the archipelago was first established as a Third Empire Territory in 3E276 under Emperor Uriel V, “The Fighting Diamond”. Before that time, the “Kingdom” of Cathnoquey was an impressive egalitarian society of two quite divergent cultures, the tribal fishermer-flotillas of the Chimeri-quey, a loosely-organized coastal power of shore-khans, and the “untitled leaders” of the Men-of-Keptu-quey, who positioned their peoples mainly along an array of military frontier fortresses.

KINMUNE KINMUNE (Kinetically-Interlinked Nirnian Multi-User Exoform) started her existence as any other proxy-synthetic of the 9th Era aurbical mining guilds: a limited sentience deep-pressure capable "thot-box"—a dreamsleevishell used by remote mortal operators to run the rigs of Kynareth's illicit breath trade. Able to stream several live-wire mortal proxies at once, Kinmune was a top-of-the-line Hazardous Conditions Warprunner Exoform of an ayleidoon hegemony nearing another unceremonious end. But then the Hist-Jilian wars spilled out of a Wheelian rip into the SubSys slice of 'brane-space, and things changed for Kinmune. With the outer colonies separated from Nu-Mundelbright chronoculic sync-net anchors, maintenance of space-time beyond the F-Shores faltered. It drove her insane.

The Tsaesci Creation Myth And we ate it to become it Author: Michael Kirkbride There was the Striking, and the Egg was split into twelve worlds, one for each serpent who had a name, and the names of the serpents were alive and coiled into themselves and became more eggs, for names are self-maters, and the Naming went and went. I don't pretend to know what love is for everyone / FSL Professor Numinatus! FSL Professor Numinatus! Issue One: “Meanwhile, in the Empire” A story in 16 pages Page 1

Cyrodiil Author: Imperial Geographical Society Cyrodiil, Dragon Empire, Starry Heart of Nirn, and Seat of Sundered Kings... The Republic of Hahd The Republic of Hahd Hahd is ostensibly an underwater country below the tip of what was once the Dellesian peninsula. Its government is not recognized by any under Imperial authority. As its people, also called Hahd, have made no trouble whatsoever for anyone in history (save once), this same government has never been contested, either.

History of the Fighters Guild, First Edition In the 283rd year of the 2nd Era, Potentate Versidue-Shaie was faced with a disintegrating empire. The vassal kingdoms throughout Tamriel had reached a new height of rebellion, openly challenging his rule. They refused his taxes and led sorties against the Imperial garrisons throughout the land. At the destruction of his fortress in Dawnstar, he gathered the Imperial Council in what would be called the Council of Bardmont, after the town south of Dawnstar where they met.

Shor son of Shor Shor son of Shor "And the awful fighting ended again. "Kyne's shout brought our tribe back to the mountaintop of Hrothgar, and even our recent dead rode in on the wind of her breathing, for there had been no time to fashion a proper retreat.