Keto Diet for Neurological Disorders. In the 1992 film, Lorenzo’s Oil, we see the story of Augusto and Michaela Odone, who defied the medical opinions of the time and sought out a treatment for their son Lorenzo’s adrenoleukodystrophy. 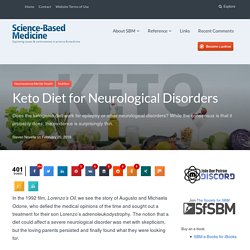 The notion that a diet could affect a severe neurological disorder was met with skepticism, but the loving parents persisted and finally found what they were looking for. It is a compelling story, but the reality is more complex. After a few decades of research, we are still left with uncertainty. The diet does prevent the build up of very long chain fatty acids (VLCFA) in the blood, but not in the brain. The evidence does suggest that if the diet is started in asymptomatic individuals with X-linked ALD (but not other disorders) it may delay progression to symptoms. We are still at the stage where reviews conclude: Keto Diet for Neurological Disorders. Is ketosis and carbohydrate restriction a viable diet for brain cancer? – The Hammer of Health.

The idea that a ketogenic diet might have utility in the treatment of cancer is becoming increasing popular. 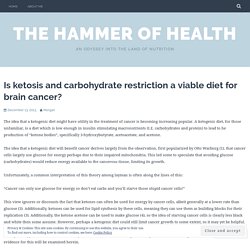 A ketogenic diet, for those unfamiliar, is a diet which is low enough in insulin stimulating macronutrients (I.E. carbohydrates and protein) to lead to he production of “ketone bodies”, specifically 3-hydroxybutyrate, acetoacetate, and acetone. The idea that a ketogenic diet will benefit cancer derives largely from the observation, first popularized by Otto Warburg (1), that cancer cells largely use glucose for energy perhaps due to their impaired mitochondria. This led some to speculate that avoiding glucose (carbohydrates) would reduce energy available to the cancerous tissue, limiting its growth.

Unfortunately, a common interpretation of this theory among layman is often along the lines of this: “Cancer can only use glucose for energy so don’t eat carbs and you’ll starve those stupid cancer cells!” As far as human studies go there have yet to be controlled trials. Citations: Polycystic Ovarian Syndrome, Insulin Resistance, and Inflammation - Blog. As our knowledge of the role and impact of insulin resistance continues to grow, we learn of more and more diseases that are influenced by impaired insulin action. 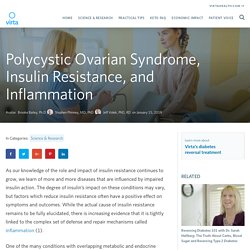 The degree of insulin’s impact on these conditions may vary, but factors which reduce insulin resistance often have a positive effect on symptoms and outcomes. Is There a Role for Short-Term Ketosis in Long-Term Care for Type 2 Diabetes? - Blog. Weight loss is the standard first step prescribed for overweight people with type 2 diabetes. 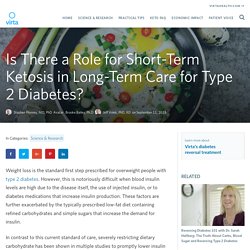 However, this is notoriously difficult when blood insulin levels are high due to the disease itself, the use of injected insulin, or to diabetes medications that increase insulin production. These factors are further exacerbated by the typically prescribed low-fat diet containing refined carbohydrates and simple sugars that increase the demand for insulin. In contrast to this current standard of care, severely restricting dietary carbohydrate has been shown in multiple studies to promptly lower insulin levels and improve blood glucose control, thus facilitating weight loss (1, 2). In its most aggressive form, a combination of severely restricting both carbohydrates and calories has led to the development of semi-starvation very low calorie diets (VLCD), typically providing 800 kcal or less per day.

A Brief Metabolic Perspective Ground-Breaking Studies from Decades Past Table 1. Interim Conclusions. Can a Low-Carbohydrate Diet Prevent or Treat Cancer? Several lines of evidence point to the idea that restricting dietary carbohydrates may have beneficial effects in the prevention or treatment of cancer. 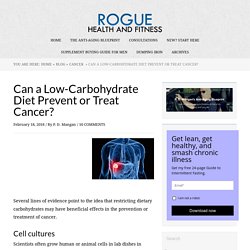 Cell cultures Scientists often grow human or animal cells in lab dishes in order to study their reactions to various stimuli, such as nutrients or drugs. Cell cultures give us reliable information on how cells work, and their relative cheapness and short time frame of experiments make them a great resource, but since they don’t represent a whole organism animal or human, results must be cautiously interpreted. Evolutionary Psychiatry: Ketogenic Diets and Bipolar Disorder: New Case Studies. Researching the viability of ketogenic diets for therapeutic usage was one of the original interests that launched this blog. 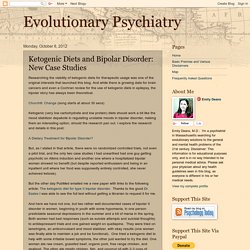 And while there is growing data for brain cancers and even a Cochran review for the use of ketogenic diets in epilepsy, the bipolar story has always been theoretical. Churchill: Change (song starts at about 30 secs) Ketogenic (very low carbohydrate and low protein) diets should work a bit like the mood stabilizer depakote in regulating unstable moods in bipolar disorder, making them an interesting option, should the research pan out. I explore the research and details in this post: 6 Ways A Ketogenic Diet Improves Brain Function - DrJockers.com. Low Carb Diets Decrease Thyroid Autoimmunity.

The High-fat Hep C Diet. The Benefits of a Lower Carbohydrate Diet. Ketogenic Diet for NBIA (Neurodegeneration with Brain Iron Accumulation) Farewell Mathias. Fasting and the Ketogenic Diet for Migraines. Migraine Sufferers Should Try a Ketogenic Diet. A Cure for Migraines?: How to Recognize and Fix a Brain Infection. Eleven Steps for Overcoming Alzheimer’s and Other Chronic Infectious Diseases. Evolutionary Psychiatry: Autism and Ketogenic Diets. I had forgotten that the good Dr. 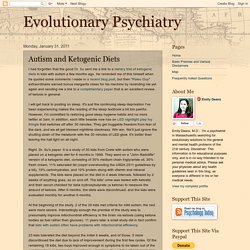 Su sent me a link to a dietary trial of ketogenic diets in kids with autism a few months ago. He reminded me of this himself when he quoted some comments I made in a recent blog post, but then "Paleo Guy" extraordinaire earned bonus margarita mixes for his machine by reminding me yet again and sending me a link to a complimentary paper that is an excellent review of ketosis in general. I will get back to posting on sleep. It's just the continuing sleep deprivation I've been experiencing makes the reading of the sleep textbook a bit too painful. However, I'm committed to restoring good sleep hygiene habits and no more twitter at 3am. Right. At the beginning of the study, 2 of the 30 kids met criteria for mild autism, the rest were more severe. 23 kids tolerated the diet beyond the initial 4 weeks, and of those, 5 more discontinued the diet due to lack of improvement during the first few cycles.

Couldn't have said it better myself!