SIBO refers to bacteria, often of the wrong kind, in the wrong place--the small intestine.
Dysbiosis refers to an unhealthy mix of bacteria in the large bowel--either not enough of the types that support our health or too many bacteria of types that cause inflammation or disease.

SIBO is a multifaceted condition. People with SIBO may have:
* GERD/Acid Reflux/Hiatal Hernia/Low Stomach Acid--see the section on that problem
* Poor motility
* Poorly functioning gall bladder or pancreas
* a malfunctioning Ileocecal valve (ICV) that allows backflow into the intestine from the bowel. This can be helped with ICV massage.

The stage for dysbiosis is set by antibiotics or other medications, stress and a poor diet.

Also check the Tests and Treatment section for more information. 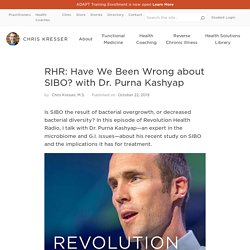 A New Understanding of SIBO and IBS, with Mark Pimentel. In this episode, we discuss: The link between food poisoning, SIBO, and IBSIBS and autoimmunityAvailable treatments for people with IBS-DGetting treatment for IBS-C and methane-predominant SIBOPimentel’s upcoming study on lovastatinSmall intestinal fungal overgrowth (SIFO)The low-fermentation diet (and problems with the low-FODMAP diet)New findings from Dr. 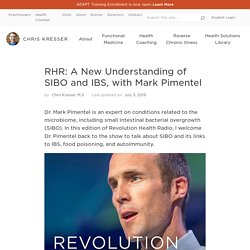 Pimentel Show notes: Chris Kresser. The Effect Medications on the Gut. Campylobacter, A Cause of SIBO. Can one bout of food poisoning lead to SIBO? 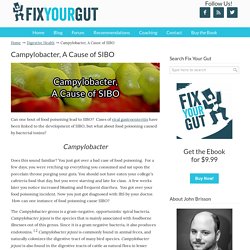 Cases of viral gastroenteritis have been linked to the development of SIBO, but what about food poisoning caused by bacterial toxins? Campylobacter Does this sound familiar? You just got over a bad case of food poisoning. For a few days, you were retching up everything you consumed and sat upon the porcelain throne purging your guts. The Campylobacter genus is a gram-negative, opportunistic spiral bacteria. Severe infections may cause bloody diarrhea, high fevers, and some require hospitalization and antibiotic therapy. Long-term proton pump inhibitor therapy leads to small bowel bacterial overgrowth as determined by breath hydrogen and methane excretion. SIBO: Methane or Hydrogen Dominant, What Is The Difference? The sufferers of SIBO are usually divided into three different categories. 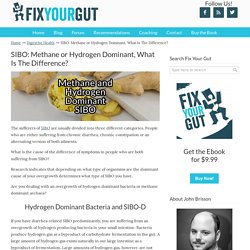 People who are either suffering from chronic diarrhea, chronic constipation or an alternating version of both ailments. My Hydrogen / Methane Breath Test Was Negative, How Can I Still Have SIBO? The hydrogen / methane breath test is used to diagnose if you have SIBO. 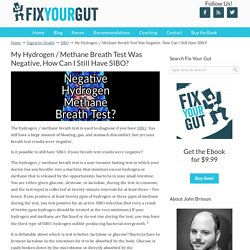 You still have a large amount of bloating, gas, and stomach discomfort, but yet your breath test results were negative. Is it possible to still have SIBO, if your breath test results were negative? The hydrogen / methane breath test is a non-invasive fasting test in which your doctor has you breathe into a machine that monitors excess hydrogen or methane that is released by the opportunistic bacteria in your small intestine. You are either given glucose, dextrose, or lactulose, during the test to consume, and the test input is collected at twenty-minute intervals for at least three – five hours. IBSchek, a New Test to Determine SIBO? A new test has been made available to aid in the diagnosis of SIBO. 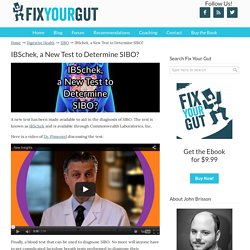 The test is known as IBSchek and is available through Commonwealth Laboratories, Inc. Here is a video of Dr. Pimentel discussing the test: Finally, a blood test that can be used to diagnose SIBO. No more will anyone have to get complicated lactulose breath tests performed to diagnose their overgrowth. Sadly, this is not the case. IBSchek The IBSchek blood test looks for two different antibodies to aid in the diagnosis of IBS / SIBO.

When someone develops food poisoning, some of the toxins that the bacteria produce are known as Cytolethal Distending Toxin B or CDT-b toxin. Your intestines have pacemaker cells that determine peristalsis (the waves that push matter through the intestines) known as the interstitial cells of Cajal. Candida, SIBO or H. Pylori? Candida, SIBO or H. pylori (helicobacter pylori) may occur alone, but they frequently exist in conjunction with one another or one leads to the other at some point. 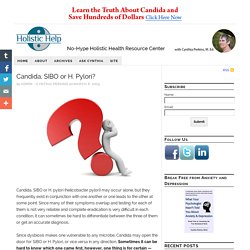 Since many of their symptoms overlap and testing for each of them is not very reliable and complete eradication is very difficult in each condition, it can sometimes be hard to differentiate between the three of them or get an accurate diagnosis. Since dysbiosis makes one vulnerable to any microbe, Candida may open the door for SIBO or H. Pylori, or vice versa in any direction. Sometimes it can be hard to know which one came first, however, one thing is for certain — they can all perpetuate one another. Special Diets for Gut Repair. Modifying Paleo for Small Intestinal Bacterial Overgrowth - The Paleo Mom. Small Intestinal Bacterial Overgrowth (or SIBO) is a chronic bacterial (and/or yeast) infection of the small intestine, characterized by excessive number and/or abnormal type of bacteria (and yeast) growing in a part of the gastrointestinal tract that normal contains relatively few microorganisms. 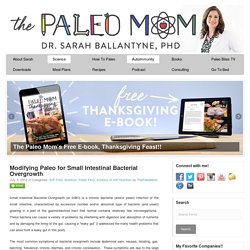 These bacteria can cause a variety of problems by interfering with digestion and absorption of nutrients and by damaging the lining of the gut, causing a “leaky gut” (I addressed the many health problems that can arise from a leaky gut in this post). The most common symptoms of bacterial overgrowth include abdominal pain, nausea, bloating, gas, belching, flatulence, chronic diarrhea, and chronic constipation. These symptoms are due to the large volume of bacteria the digestive tract (alive and dead, as they read the end of their lifecycle) and the large amount of gas and metabolic waste that they produce.

Many more symptoms of SIBO are a direct effect of nutrient malabsorption. . Fruit and Starchy Vegetables with Small Intestinal Bacterial Overgrowth - The Paleo Mom. Small Intestinal Bacterial Overgrowth (SIBO) is a condition in which bacteria, yeast and/or fungi that would not normally reside in the digestive tract thrive in the small intestine (usually the third segment called the ileum, but they can work their way higher up the digestive tract to the jejunum and, in extreme cases, even the duodenum). 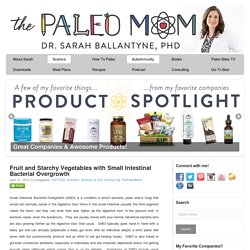 They are usually mixed with your normal, beneficial bacteria who are also growing farther up the digestive tract than usual. SIBO typically goes hand in hand with a leaky gut and can actually perpetuate a leaky gut even after an individual adopts a strict paleo diet (even with the autoimmunity protocol and an effort to eat gut-healing foods). SIBO is also linked to gut-brain connection problems, especially in individuals who are stressed, depressed and/or not getting enough sleep (although which comes first is up for debate). And coconut milk kefir ), you replenish the good bacteria that should be growing farther down your digestive tract.