The Effect Medications on the Gut

Metformin. Proton Pump Inhibitors. Your Microbiome On Drugs. The Effects of Non-Antibiotic Drugs on the Microbiome. Medications That Cause Leaky Gut and SIBO. Environmental Toxins, Drug Metabolism, and the Microbiome - Kresser Institute. Bacteria Can Evolve Resistance to Drugs Before Those Drugs Are Used. In 1928, after returning from a countryside holiday and examining a stack of petri dishes that he had left in the sink, British chemist Alexander Fleming discovered a new type of bacteria-killing mold. 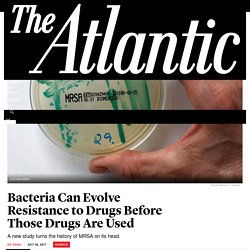 From that mold, he isolated a chemical called penicillin, and ushered in the modern antibiotic era—an age when humans could finally keep infectious diseases at bay. But in 1945, two years after penicillin became widely used and shortly after Fleming won a Nobel Prize for its discovery, he issued a stark warning against overusing these wondrous chemicals.

Gut Microbiome Interactions with Drug Metabolism, Efficacy and Toxicity. Medications That Cause Gut Dysfunction. Anti-inflammatory Drug and Gut Bacteria Have a Dynamic Interplay, According to Penn Animal Study. The effects of bowel cleansing for colonoscopies on our microbiome — The American Microbiome Institute. Colonoscopies and colonic surgeries are known to require bowel cleansing prior to the procedure. 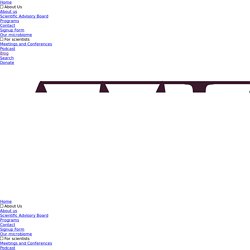 To accomplish this, what are thought to be generally safe and effective products are used in order to cleanse the bowel. The microbiome plays a role in antipsychotic-mediated weight gain — The American Microbiome Institute. Weight-gain is a common side effect associated with taking anti-psychotic therapies, and unfortunately the mechanism of action by which this specifically occurs is poorly understood. 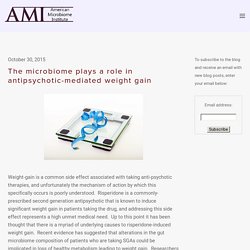 Risperidone is a commonly-prescribed second generation antipsychotic that is known to induce significant weight gain in patients taking the drug, and addressing this side effect represents a high unmet medical need. Interaction between Atypical Antipsychotics and the Gut Microbiome in a Bipolar Disease Cohort. Not Just Antibiotics: Is Cancer Chemotherapy Driving Antimicrobial Resistance?: Trends in Microbiology. Systematic review: human gut dysbiosis induced by non-antibiotic prescription medications. Proton pump inhibitors are often prescribed for prevention and treatment of gastroesophageal reflux and peptic ulcer disease[16, 17] and rank eighth among the top therapeutic prescription classes in the United States.[18] The relative efficacy and safety of PPIs have contributed to their significant overutilisation.[19, 20] However, meta-analyses have shown that PPI use was associated with increased incidence of Clostridium difficile infection,[21, 22] higher rates of C. difficile recurrence in hospitalised patients,[23] increased risk of other enteric infections[24, 25] and community-acquired Streptococcus pneumoniae.[26] A recent study including 400 cirrhotic patients reported that PPI prescription was an independent predictor of infection.[27] 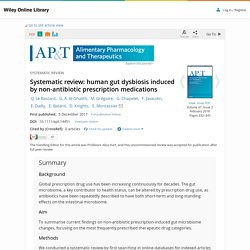 Healthy Guts Burn More Calories During Sleep. An unhealthy shift in your gut microbes might cause you to gain weight by changing how many calories you burn while you sleep, a new study with mice suggests. 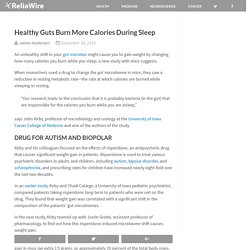 When researchers used a drug to change the gut microbiome in mice, they saw a reduction in resting metabolic rate—the rate at which calories are burned while sleeping or resting. Medications Harming Your Digestive Health – Imodium (Loperamide) You ate Taco Bell for lunch, and your stomach is rumbling, you run for the nearest bathroom. 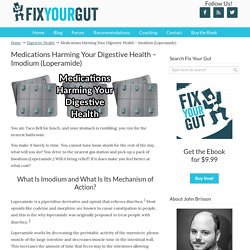 You make it barely in time. You cannot have loose stools for the rest of the day, what will you do? Medications Harming Your Digestive Health - Miralax. The Center for Disease Control reports that, on average, a doctor will see fifty patients each day. 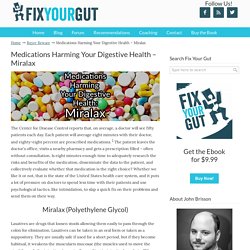 Each patient will average eight minutes with their doctor, and eighty-eight percent are prescribed medications. The patient leaves the doctor’s office, visits a nearby pharmacy and gets a prescription filled – often without consultation. Is eight minutes enough time to adequately research the risks and benefits of the medication, disseminate the data to the patient, and collectively evaluate whether that medication is the right choice? Whether we like it or not, that is the state of the United States health care system, and it puts a lot of pressure on doctors to spend less time with their patients and use psychological tactics, like intimidation, to slap a quick fix on their problems and send them on their way.

Laxatives are drugs that loosen stools allowing them easily to pass through the colon for elimination. Medications Harming Your Digestive Health - Reglan. Nausea is a common symptom of many ailments like the flu, food poisoning, stress, or even motion sickness. 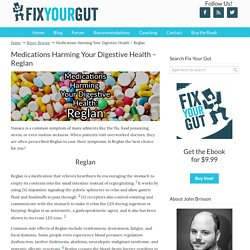 When patients visit overworked doctors, they are often prescribed Reglan to ease their symptoms. Is Reglan the best choice for you? Reglan is a medication that relieves heartburn by encouraging the stomach to empty its contents into the small intestine instead of regurgitating. It works by using D2 dopamine signaling the pyloric sphincter to relax and allow gastric fluid and foodstuffs to pass through. D2 receptors also control vomiting and communicate with the stomach to make it relax the LES during ingestion or burping. Common side effects of Reglan include restlessness, drowsiness, fatigue, and focal dystonia. Hormonal contraceptives are associated with altered cervical immunity, dependent on the presence of genital tract infections — The American Microbiome Institute. Past studies have shown an association between hormonal contraceptives and risk of HIV-1 infection, as well as between genital tract infection and acquisition of HIV-1. 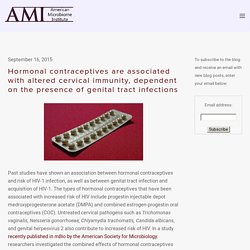 The types of hormonal contraceptives that have been associated with increased risk of HIV include progestin injectable depot medroxyprogesterone acetate (DMPA) and combined estrogen-progestin oral contraceptives (COC). Untreated cervical pathogens such as Trichomonas vaginalis, Neisseria gonorrhoeae, Chlyamydia trachomatis, Candida albicans, and genital herpesvirus 2 also contribute to increased risk of HIV. In a study recently published in mBio by the American Society for Microbiology, researchers investigated the combined effects of hormonal contraceptives and genital tract infections on risk level of HIV. The participants of this study were 633 HIV-negative women and 199 HIV-positive women, all of whom live in Uganda or Zimbabwe. It was found that more than half the study participants were positive for herpes. HIV vaccine failed because of interaction with microbiome — The American Microbiome Institute.

From 2009 to 2013, scientists at Duke University and the National Institute of Allergy and Infectious Diseases had been working on what looked like a promising cure to HIV. 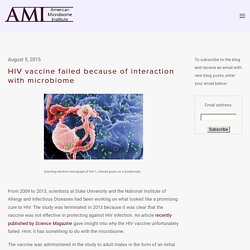 The study was terminated in 2013 because it was clear that the vaccine was not effective in protecting against HIV infection. An article recently published by Science Magazine gave insight into why the HIV vaccine unfortunately failed.