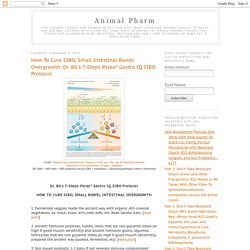 Optional 8. Cheaper, Safer, Better: the Herbal Approach To Small Intestinal Bacterial Overgrowth. My general conception of herbs is has been that they’re what you grow in your garden. Yes, they can be helpful with illness, but mostly around the edges. Pharmaceutical companies, on the other hand, spend hundreds of millions of dollars to produce a drug.

If you’re really sick – you’re going to need drugs. This study threw a monkey wrench into that idea. Three Effective Ways to Treat SIBO. How Long Should You Treat SIBO? SIBO Diet Tips. SIBO Survivor- Heal Your Gut and Get Back to Living Normally Again! HOW TO PREVENT SIBO RELAPSE – Victoria Fenton Healthcare. SIBO is the new Candida – it seems everyone with a gut problem thinks they have SIBO. 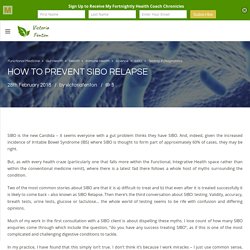 And, indeed, given the increased incidence of Irritable Bowel Syndrome (IBS) where SIBO is thought to form part of approximately 60% of cases, they may be right. But, as with every health craze (particularly one that falls more within the Functional, Integrative Health space rather than within the conventional medicine remit), where there is a latest fad there follows a whole host of myths surrounding the condition. Two of the most common stories about SIBO are that it is a) difficult to treat and b) that even after it is treated successfully it is likely to come back – also known as SIBO Relapse.

Then there’s the third conversation about SIBO: testing. Validity, accuracy, breath tests, urine tests, glucose or lactulose… the whole world of testing seems to be rife with confusion and differing opinions. Much of my work in the first consultation with a SIBO client is about dispelling these myths. Ultimate SIBO Treatment Guide: Find Out Which Strategy is Best For You! Treatment for SIBO is important to learn about since there are a few different options you can use. 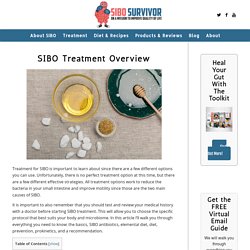 Unfortunately, there is no perfect treatment option at this time, but there are a few different effective strategies. All treatment options work to reduce the bacteria in your small intestine and improve motility since those are the two main causes of SIBO. It is important to also remember that you should test and review your medical history with a doctor before starting SIBO treatment. This will allow you to choose the specific protocol that best suits your body and microbiome. In this article I’ll walk you through everything you need to know: the basics, SIBO antibiotics, elemental diet, diet, prevention, prokinetics, and a recommendation. SIBO: What Causes It and How to Treat It. Small intestinal bacterial overgrowth (SIBO) can cause constipation, diarrhea, malnutrition, unexplained weight loss, and fatigue. 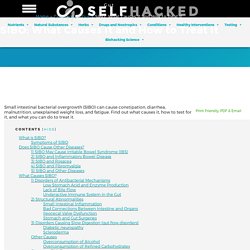 In most cases, SIBO is caused by multiple strains that live in the colon. Bacteria can cause damage by stealing nutrients and releasing toxins. SIBO Treatment Hacks: 5 Common Mistakes. If your SIBO treatment isn’t working, it's important to figure out why. 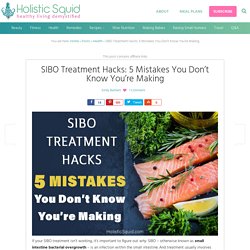 SIBO – otherwise known as small intestine bacterial overgrowth – is an infection within the small intestine. And treatment usually involves antibiotic drugs. When you have SIBO, you have either too much bacteria living in your small intestine. Or you’ve got the wrong sort. Either way, you're bound to see a constellation of symptoms, including: GasBloatingAbdominal crampingDiarrhea and/or constipation Did you know that after a single round of antibiotics, bacteria can repopulate the small intestine in as little as two weeks? Healing the Cause of IBS and SIBO. 6 Steps to Rebuild Gut Flora Metabolism - DrJockers.com. 6 Steps to Rebuild Gut Flora Metabolism Gut flora is a term used to describe the trillions of microbes that live in our intestines. 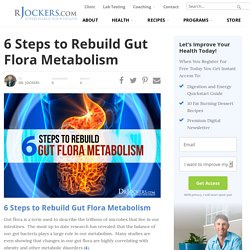 The most up to date research has revealed that the balance of our gut bacteria plays a large role in our metabolism. Many studies are even showing that changes in our gut flora are highly correlating with obesity and other metabolic disorders (4). Remember that girl that seemed to be able to eat EVERYTHING and not gain a pound? We always assumed that she just had a rock star metabolism. Gut Flora and Your Weight Did you know that science says your gut bacteria is largely responsible for how fast or slow your metabolism is? Science is showing that if we can balance our microbiome, we can significantly change our metabolism and quit counting calories. As a matter of fact, caloric restriction typically leads to the body going into starvation mode and storing all of our intake as fat the best that it possibly can. Function of The Gut Bacteria.

SIBO Update—An Interview with Dr. Mark Pimentel. RHR: New Treatment for SIBO and IBS-C—with Dr. Kenneth Brown. As you know, I treat a lot of patients with gastrointestinal issues. 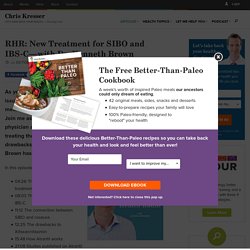 Two of the most challenging conditions to treat are methane-predominant SIBO and constipation-predominant IBS. Join me as I talk with Dr. Kenneth Brown, a practicing physician and clinical researcher who has been specializing in treating these conditions for the past 15 years. We discuss the drawbacks of existing treatments and a new product that Dr. Brown has developed, called Atrantil. In this episode we cover: Solving SIBO – 5 Strategies to Prevent and Eliminate SIBO Naturally. Small Intestine Bacterial Overgrowth, or SIBO, is a growing problem in our society. 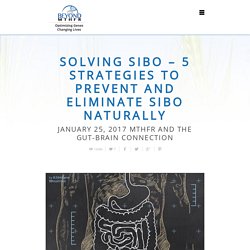 SIBO is a problem where too much bacteria is living in the small intestine. It can impact everything from your mood, your sleep, your energy, your methylation cycle, and of course your digestion. Living with SIBO is very difficult! Most doctors use antibiotics to kill the excess bacteria, but this is a poor approach. Studies confirm that 50% of everyone treated for SIBO with antibiotics will have it return within 9 months.

Join Dr. Cheaper, Safer, Better: the Herbal Approach To Small Intestinal Bacterial Overgrowth. Get to the Root Cause of Fibromyalgia — Dr Courtney Craig. A bold new study examined the effectiveness of herbal therapy versus antibiotic therapy for the treatment of small intestinal bacterial overgrowth (SIBO). 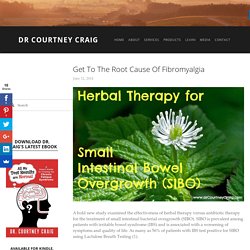 SIBO is preva­lent among patients with irritable bowel syndrome (IBS) and is associated with a worsening of symptoms and quality of life. As many as 56% of patients with IBS test positive for SIBO using Lactulose Breath Testing (1). Several studies suggest that SIBO may be the root cause of fibromyalgia symptoms. SIBO Updates with Dr. Allison Siebecker. SIBO / Heartburn: Thousands Relieved Who Never Thought They Would Be.

Resolution of Upper Gut (H. pylori) Dysbiosis / Repairing Ulcers. Upper Gut Dysbiosis, Anxiety, Brain Fog, Fatigue, Is Ammonia the Cause? How to Use Fermented Vegetables to Repair a Damaged Microbiome. The Magic Bullet Treatment for GERD – D-limonene! SIBO / Heartburn: Thousands Relieved Who Never Thought They Would Be.