How do you make friends? This is a collection of links to articles about making friends, keeping friends, being a friend and the benefits of friendship.

How to Recognize If You're Being 'Lovebombed' by a Narcissist. How important are social relations for our health and well-being? Measuring loneliness Psychologists and social neuroscientists often refer to loneliness as painful isolation. 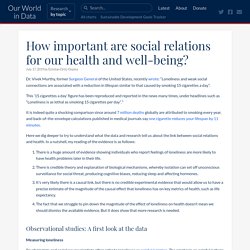 The emphasis on painful is there to make a clear distinction between solitude – the state of being alone – and subjective loneliness, which is the distressing feeling that comes from unmet expectations of the types of interpersonal relationships we wish to have. Researchers use several kinds of data to measure solitude and loneliness. The most common source of data are surveys where people are asked about different aspects of their lives, including whether they live alone, how much time they spend with other people in a given window of time (e.g. ‘last week’) or specific context (e.g. Surveys confirm that people respond differently to questions about subjective loneliness and physical social isolation, which suggests people do understand these as two distinct issues. In the chart below I’ve put together estimates on self-reported feelings of loneliness from various sources. What Makes a Good Life? Lessons from the Longest Study on Happiness.

Tips on Making and Keeping Friends

Understanding People. Supporting a Friend with Chronic Illness. Supporting a Friend with Cancer. Make Things Right. How Relationships Affect Health—And How to Feel More Connected. Friendship. Ben Franklin’s 6 Steps to Becoming a Good Conversationalist. Friendship – a Term Representing Many Different Types of Relationships. On May 31, 2015 at 6:59 pm Recently, I’ve been fortunate enough to find a group of people who enjoy gathering for a focused discussion on a topic. 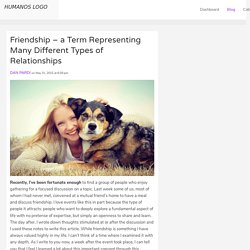 Last week some of us, most of whom I had never met, convened at a mutual friend’s home to have a meal and discuss friendship. I love events like this in part because the type of people it attracts: people who want to deeply explore a fundamental aspect of life with no pretense of expertise, but simply an openness to share and learn. The day after, I wrote down thoughts stimulated at or after the discussion and I used these notes to write this article. While friendship is something I have always valued highly in my life, I can’t think of a time where I examined it with any depth. Let’s Start with the Event Here is the question presented by my friend and organizer, Tim Chang, at the beginning of the evening: We didn’t cover all aspects of this question, but using it as a starting place helped us launch into an interesting discussion. History Wow!

How to Be the Type of Person Everyone Wants to Know. Why Friendship Can Save Your Life. With Mark Hyman, MD and Lissa Rankin, MD We live in an era in which individualism is rewarded and collectivism is seen as weak. 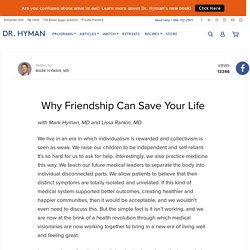 We raise our children to be independent and self-reliant. It’s so hard for us to ask for help. Interestingly, we also practice medicine this way. We teach our future medical leaders to separate the body into individual disconnected parts. In my work as a functional medicine doctor, I see the patient as a whole person instead of merely as an assortment of disconnected parts. Throughout the many years I’ve worked with my patients using this model of medicine, I‘ve been astounded by the resiliency of the human body. We need doctors who understand how well the body reacts when the whole system is treated, not just the symptoms. Lissa’s work is functional medicine at its best, addressing the truth that we all need each other to lean on, to help heal, to connect, and to flourish. Dr. Dr. Dr. But the placebo effect is nothing to be avoided. How To Make Your Life Better By Sending Five Simple Emails. What's the best way to help a friend? How to network: 5 methods by top experts.

The Lazy Way To An Awesome Life: 3 Secrets Backed By Research. Friendship - A collection of TED Talks (and more) on the topic of friendship. Take the 28-Day Kindness Challenge and Restore Your Faith in Humans. Make February your month to flex your kindness muscle. 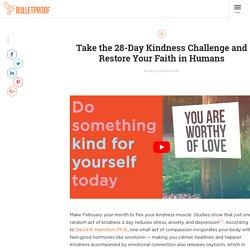 Studies show that just one random act of kindness a day reduces stress, anxiety, and depression[1]. According to David R. Hamilton, Ph.D., one small act of compassion invigorates your body with feel-good hormones like serotonin — making you calmer, healthier, and happier. Kindness accompanied by emotional connection also releases oxytocin, which in turn is cardioprotective as it lowers blood pressure. Kindness makes others feel good, too. Get a printable version of the Kindness Calendar Sign-up for the Bulletproof mailing list and receive the latest news and updates!

Who are your real friends? Your brainwaves can tell. Solitude. Are We In the Middle of a Loneliness Epidemic? “Our crowded, lengthy commutes are making us more lonely than ever.” 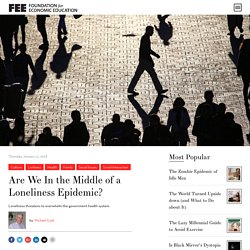 “Eating alone is BAD for your health - especially if you're a man, study shows.” The Impact of Loneliness. U.K. appoints a minister for loneliness: ‘It’s proven to be worse for health than smoking 15 cigarettes a day’ LONDON — Since Britain voted to leave the European Union more than a year ago, Europeans have mockingly said that the decision will result in an isolated, lonely island nation. 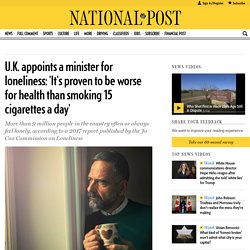 But Britain, in fact, already has a serious problem with loneliness, research has found. More than 9 million people in the country often or always feel lonely, according to a 2017 report published by the Jo Cox Commission on Loneliness. Loneliness twice as unhealthy as obesity for older people, study finds.

Loneliness can be twice as unhealthy as obesity, according to researchers who found that feelings of isolation can have a devastating impact on older people. 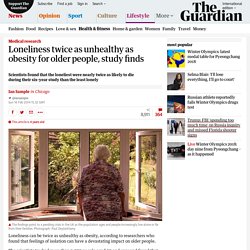 The scientists tracked more than 2,000 people aged 50 and over and found that the loneliest were nearly twice as likely to die during the six-year study than the least lonely. Compared with the average person in the study, those who reported being lonely had a 14% greater risk of dying. The figure means that loneliness has around twice the impact on an early death as obesity. Poverty increased the risk of an early death by 19%. The findings point to a coming crisis as the population ages and people increasingly live alone or far from their families.