This camp provided an opportuntity for local students to explore the world of computer science through unplugged, online and robotic activities. 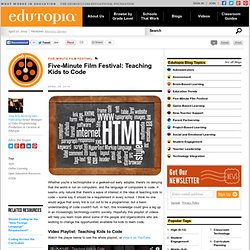 It seems only natural that there's a wave of interest in the idea of teaching kids to code -- some say it should be a requirement in every school. I think no one would argue that every kid is cut out to be a programmer, but a basic understanding of code couldn't hurt. In fact, this knowledge could give a leg up in an increasingly technology-centric society.

Hopefully this playlist of videos will help you learn more about some of the people and organizations who are working to change the opportunities available for kids to learn code. Video Playlist: Teaching Kids to Code Watch the player below to see the whole playlist, or view it on YouTube. How Minecraft Teaches Kids Real-World Skills. The point of Minecraft seems simple: build practically anything you can imagine. 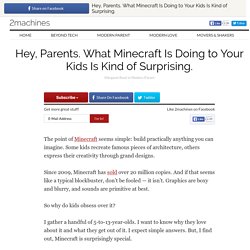 Some kids recreate famous pieces of architecture, others express their creativity through grand designs. Since 2009, Minecraft has sold over 20 million copies. And if that seems like a typical blockbuster, don’t be fooled — it isn’t. Graphics are boxy and blurry, and sounds are primitive at best. So why do kids obsess over it? I gather a handful of 5-to-13-year-olds. First, some basics about the game. Players begin on any number of randomly-generated terrains — square blocks that make up deserts, mountains, prairie and even clouds. When night falls, mobs of monsters — spiders, zombies and skeletons — chase them with a single-minded purpose.

Minecraft is an open-ended “sandbox” that doesn’t come with instructions, so the gameplay is confusing — but that’s what makes it irresistible. John tells me he tries “new moves to learn new things.” CS Fundamentals for grades K-5. Our Computer Science Fundamentals courses have about 15 lessons that may be implemented as one unit or over the course of a semester. 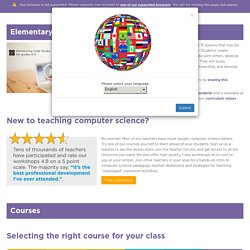 Students create computer programs that will help them learn to collaborate with others, develop problem-solving skills, and persist through difficult tasks. They will study programming concepts, computational thinking, digital citizenship, and develop interactive games or stories they can share. If you like teaching CS Fundamentals, invite other teachers by sharing this handout.

Our curriculum aligns to the newly revised 2017 CSTA standards and is available at no cost for anyone, anywhere to teach. Code.org. Code.org CEO Hadi Partovi Podcast Interview with Kara Swisher. It’s easy to mistake computer science for programming, and Code.org CEO Hadi Partovi says that even the kids who will never work for Google or Microsoft should be educated in digital literacy. 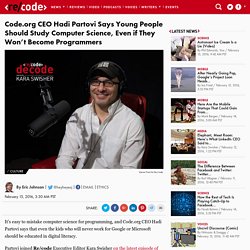 Partovi joined Re/code Executive Editor Kara Swisher on the latest episode of “Re/code Decode,” where he argued that we should start imparting the basics of computer science to kids in elementary school. “We don’t teach biology or chemistry to kids because they’re going to become surgeons or chemists,” Partovi said. “We teach them about photosynthesis and that water is H2O, or how lightbulbs work, just to understand the world around us. You don’t use any of it, but you do on a day-to-day basis use public-key encryption, and the average American has absolutely no idea what that is.” Ozobots. Drawing with Ozobot. Ozobot won’t move until at least one of the five bottom sensors sees a color. 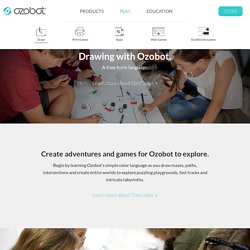 For instance Ozobot will just patiently sit, wait and blink when placed on a white sheet of paper. Place Ozobot on a dark area, like a wood desk or a black kitchen counter and Ozobot will immediately begin exploring and searching for the next adventure. Tip: Ozobot is Completely obsessed with finding a path and won't hesitate to jump off your dark desk. Ozobot – Android Apps on Google Play. Ozobot Bit. Adorable robot genius, anyone? 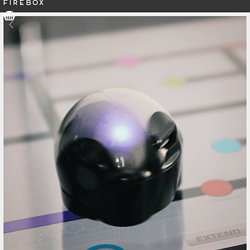 These little ‘bots are guaranteed to bust even the most acquainted of minds. (We’re talking about you, nerds.) Ozobot's behaviour is programmed with a doodle, which is fantastic news, because intrigue of human-robot interaction aside, it’s likely been a couple of decades since it was deemed acceptable for you to get your scribble on. OzoBlockly Games. Learn to Code: Getting started with OzoBlockly and Ozobot Bit robot. Ozobot. Ozobot. Gamestar Mechanic ages 7-14 years. Scratch - Imagine, Program, Share.

Programming courses for kids. Move the Turtle - Programming for Kids on the iPhone and iPad. Hopscotch - Make your own game. Learn to code. Daisy the Dinosaur. Cargo-Bot – iPad. The first game programmed entirely on iPad® Be Logical. 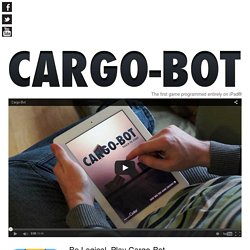