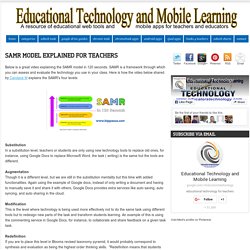 SAMR is a framework through which you can assess and evaluate the technology you use in your class. Here is how the video below shared by Candace M explains the SAMR's four levels: Substitution In a substitution level, teachers or students are only using new technology tools to replace old ones, for instance, using Google Docs to replace Microsoft Word. the task ( writing) is the same but the tools are different. Augmentation Though it is a different level, but we are still in the substitution mentality but this time with added functionalities. Again using the example of Google docs, instead of only writing a document and having to manually save it and share it with others, Google Docs provides extra services like auto saving, auto syncing, and auto sharing in the cloud. Watch the video to learn more about SAMR.

The Hawn Foundation. I love MindUP! 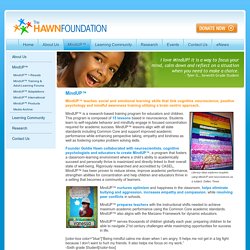 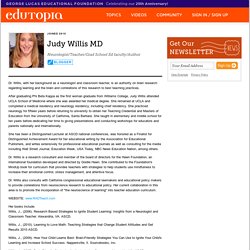 Willis, with her background as a neurologist and classroom teacher, is an authority on brain research regarding learning and the brain and correlations of this research to best teaching practices. After graduating Phi Beta Kappa as the first woman graduate from Williams College, Judy Willis attended UCLA School of Medicine where she was awarded her medical degree.

She remained at UCLA and completed a medical residency and neurology residency, including chief residency. She practiced neurology for fifteen years before returning to university to obtain her Teaching Credential and Masters of Education from the University of California, Santa Barbara. She taught in elementary and middle school for ten years before dedicating her time to giving presentations and conducting workshops for educators and parents nationally and internationally. Dr. Dr. WEBSITE: www.RADTeach.com Her books include: Willis, J., (2006). Willis, J., (2010). Willis, J., (2009). Willis, J., (2007). Chapters in Books. Kath Murdoch: Readings & Presentations. Visible Thinking. Core Routines The core routines are a set of seven or so routines that target different types of thinking from across the modules. 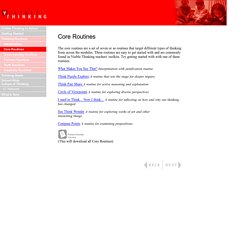 These routines are easy to get started with and are commonly found in Visible Thinking teachers' toolkits. Try getting started with with one of these routines. Study shows maths experts are 'made, not born' (Medical Xpress)—A new study of the brain of a maths supremo supports Darwin's belief that intellectual excellence is largely due to "zeal and hard work" rather than inherent ability. 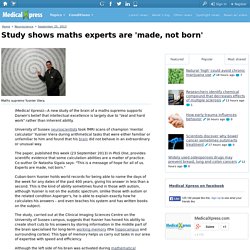 University of Sussex neuroscientists took fMRI scans of champion 'mental calculator' Yusnier Viera during arithmetical tasks that were either familiar or unfamiliar to him and found that his brain did not behave in an extraordinary or unusual way. The paper, published this week (23 September 2013) in PloS One, provides scientific evidence that some calculation abilities are a matter of practice. From Degrading to De-Grading. March 1999 From Degrading to De-Grading By Alfie Kohn Pour lire cet article en français, cliquer ici. 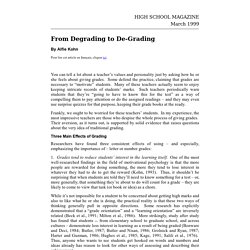 You can tell a lot about a teacher’s values and personality just by asking how he or she feels about giving grades. Some defend the practice, claiming that grades are necessary to “motivate” students. Frankly, we ought to be worried for these teachers’ students. Education - Province of British Columbia. Learning Theories, Learning Models, Learning Theory Summaries - in Plain English! Design Thinking for Educators. How a Radical New Teaching Method Could Unleash a Generation of Geniuses. In 2009, scientists from the University of Louisville and MIT's Department of Brain and Cognitive Sciences conducted a study of 48 children between the ages of 3 and 6. 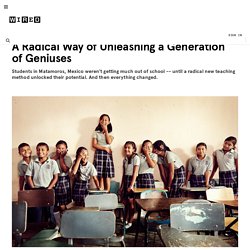 The kids were presented with a toy that could squeak, play notes, and reflect images, among other things. For one set of children, a researcher demonstrated a single attribute and then let them play with the toy. Another set of students was given no information about the toy. This group played longer and discovered an average of six attributes of the toy; the group that was told what to do discovered only about four. A similar study at UC Berkeley demonstrated that kids given no instruction were much more likely to come up with novel solutions to a problem. Gopnik's research is informed in part by advances in artificial intelligence. A Brief History of Alternative Schools New research shows what educators have long intuited: Letting kids pursue their own interests sharpens their hunger for knowledge. 1921A. 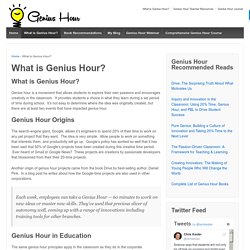 Genius hour is a movement that allows students to explore their own passions and encourages creativity in the classroom.