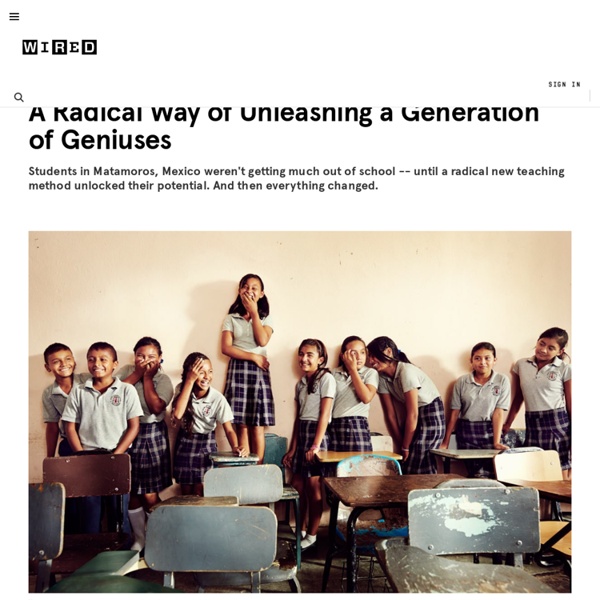 You can read a version of this story in Spanish here. Pueden leer una versión de esta historia en español aquí. José Urbina López Primary School sits next to a dump just across the US border in Mexico. The school serves residents of Matamoros, a dusty, sunbaked city of 489,000 that is a flash point in the war on drugs. There are regular shoot-outs, and it’s not uncommon for locals to find bodies scattered in the street in the morning. To get to the school, students walk along a white dirt road that parallels a fetid canal. For 12-year-old Paloma Noyola Bueno, it was a bright spot. After school, Paloma would come home and sit with her father in the main room of their cement-and-wood home. Sergio Juárez Correa was used to teaching that kind of class. He too had grown up beside a garbage dump in Matamoros, and he had become a teacher to help kids learn enough to make something more of their lives. At home in Matamoros, Juárez Correa found himself utterly absorbed by these ideas.

How to Get Involved in the Teaching Movement That Could Transform Education In the weeks leading up to the publication of our cover story about Sergio Juárez Correa and the students of José Urbina López Primary School, it became clear that WIRED could help. We decided to sponsor the school and Juárez Correa, providing them with supplies and equipment they need, like a projector, printer, and laser pointer. But there also are powerful ways you can get involved with the burgeoning student-centered style of learning and teaching. Whether you want to bring this approach into an existing school, start a program of your own, donate to a program, or find a teacher who has asked for specific help, we’ve got suggestions.

SOLE STORIES This is a persuasive essay written by Princess Rebullo, a fifth grade student in Mr. Jamison’s class at Lawrence Intermediate School in Lawrenceville, NJ. Do you ever wake up in the morning and think “School again?” You go to school and talk to your best friends. Then you look around and see how you can’t talk to everybody. The Hawn Foundation I love MindUP! It is a way to focus your mind, calm down and reflect on a situation when you need to make a choice. - Tyler G., Seventh Grade Student MindUP™ teaches social and emotional learning skills that link cognitive neuroscience, positive psychology and mindful awareness training utilizing a brain centric approach.

The 39 Most Iconic Feminist Moments of 2014 In 1998, Time magazine declared feminism dead. Nearly 15 years later, it wondered if instead, perhaps feminism should be banned. Constantly on attack from all sides, feminism has spent the past few decades proving its importance and relevance over and over and over again. If there's one thing history has taught us, it's that the backlash against feminism will always be a measure of our success. That's the thing with progress — it is perceived as a threat by those too weak to embrace it. Indeed, it's clear 2014 was a historic one for feminism.

SAMR Model Explained for Teachers Below is a great video explaining the SAMR model in 120 seconds. SAMR is a framework through which you can assess and evaluate the technology you use in your class. Here is how the video below shared by Candace M explains the SAMR's four levels: Substitution In a substitution level, teachers or students are only using new technology tools to replace old ones, for instance, using Google Docs to replace Microsoft Word. the task ( writing) is the same but the tools are different. About Us - Black Tomato An award-winning, creative and cutting-edge luxury tour operator, Black Tomato are experts in creating tailor made, luxury holidays and honeymoons around the world. Whatever your destination, however unusual your request, Black Tomato is the only place to go to book your ultimate trip away. Channelling the spirit of the pioneer, Epic Tomato is a completely bespoke travel company providing extreme adventure expedition-led trips to the farthest corners of the planet. From Patagonia to Papua New Guinea, Mongolia and beyond, Epic Tomato brings new and unique adventures to life. An online editorial magazine dedicated to beach culture, Beach Tomato covers fashion, beauty, travel and lifestyle and an online beach villa booking platform. Bring the beach life to your desktop or book your villa escape at the click of a button.

edutopia Dr. Willis, with her background as a neurologist and classroom teacher, is an authority on brain research regarding learning and the brain and correlations of this research to best teaching practices. After graduating Phi Beta Kappa as the first woman graduate from Williams College, Judy Willis attended UCLA School of Medicine where she was awarded her medical degree. She remained at UCLA and completed a medical residency and neurology residency, including chief residency. She practiced neurology for fifteen years before returning to university to obtain her Teaching Credential and Masters of Education from the University of California, Santa Barbara.

The Christmas Truce of 1914 This December marks the centennial of the famous ceasefire along the Western Front during World War I. On Christmas Eve, 1914, along the four-hundred-mile frontline, enemy soldiers spontaneously emerged from their trenches, arms laid aside, to celebrate Christ’s birth together. They sang carols, exchanged gifts (jams and candies, cigarettes, newspapers), kicked around a soccer ball, and shared photos of loved ones. They also buried each other’s dead and prayed communally over the bodies, led by chaplains. What is Genius Hour? What is Genius Hour? Genius hour is a movement that allows students to explore their own passions and encourages creativity in the classroom. It provides students a choice in what they learn during a set period of time during school. It’s not easy to determine where the idea was originally created, but there are at least two events that have impacted genius hour. Genius Hour Origins The search-engine giant, Google, allows it’s engineers to spend 20% of their time to work on any pet project that they want.

It's One Of The Most Popular Songs In The World Right Now. Thank God Someone Finally Fixed It. You know that popular song we're all singing? Like This Post On Facebook "Rude" by Magic! is catchy. From Degrading to De-Grading March 1999 From Degrading to De-Grading By Alfie Kohn 31 Rolls of Undeveloped Film from a Soldier in WWII Discovered and Processed Photographer Levi Bettweiser is the man behind the Rescued Film Project, an effort to find and rescue old and undeveloped rolls of film from the far corners of the world. He recently came across one of his biggest finds so far: 31 undeveloped rolls of film shot by a single soldier during World War II. Bettweiser tells us he found the film rolls in late 2014 at an auction in Ohio.

Study shows maths experts are 'made, not born' (Medical Xpress)—A new study of the brain of a maths supremo supports Darwin's belief that intellectual excellence is largely due to "zeal and hard work" rather than inherent ability. University of Sussex neuroscientists took fMRI scans of champion 'mental calculator' Yusnier Viera during arithmetical tasks that were either familiar or unfamiliar to him and found that his brain did not behave in an extraordinary or unusual way. The paper, published this week (23 September 2013) in PloS One, provides scientific evidence that some calculation abilities are a matter of practice.

Barcelona star Neymar shows off his dancing skills with kitchen staff Barcelona's striker Neymar Jr normally exhibits his dancing skills on the pitch while celebrating - but it turns out he's pretty handy at the more classic ballroom stuff too. Especially when he partners up with his kitchen staff... Marcela Lermy has become close friends with the samba star while working at the Brazilian star's home in Spain. The forward today posted this video via his Instagram with the caption "How I love this woman." Although Miss Lermy appears in a few other posts on Neymar's Instagram, this is not a new affair for the attacker, who is rumoured to be dating Soraja Vucelic. We don't know what's going on at the Nou Camp at the minute, but Neymar's Brazilian mate Dani Alves has posted his own dancing video too.