EdTech Focus on K-12: IT and Education 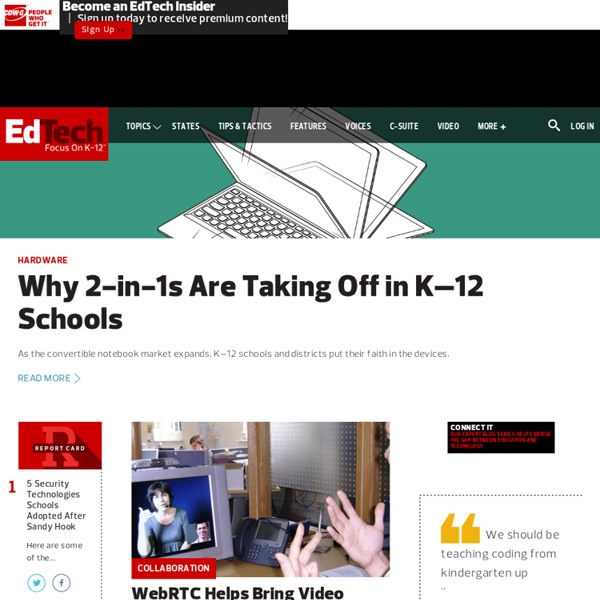 Can ‘Dragon Water’ Power the Planet With Renewable Energy? An ambitious project is being launched to drill deep into the Earth’s crust to harness super-heated “dragon water” that would generate massive quantities of renewable energy. Unlike traditional geothermal heat, which exploits hot rocks to produce steam for turbines, this project goes far deeper—to where the pressure and temperature are huge but the potential benefits are 10 times as great. There is an infinite amount of energy beneath the Earth’s crust. The problem is the technology to harness it. The European Union (EU) believes that deep drilling techniques developed by the oil industry can be adapted to extract the energy.

10 Must Have Tools for BYOD Classroom November 10, 2015 With the advance of technology and mobile gadgetry there emerged a wide variety of learning trends endemic to 21st century classroom environment. One of these trends is what is conventionally referred to as BYOD/T (Bring Your Own Device/Technology). In a BYOD classroom, students bring their own technology (e.g hand-held devices, laptops..etc) and use them for various learning activities. 8 Examples of Transforming Lessons Through the SAMR Cycle The SAMR Model for integrating technology into teaching, developed by Dr. Ruben Puentedura, has gained a good deal of exposure in recent years. “SAMR” is an acronym that stands for Substitution, Augmentation, Modification, and Redefinition. The SAMR model provides a technique for moving through degrees of technology adoption to find more meaningful uses of technology in teaching and move away from simply using “tech for tech’s sake”. We recently discussed the SAMR model during an Academic Technology Work Group meeting at The College of Westchester.

Strategic IT 2014 Ranking: 1 Offshoring to India remains a highly attractive proposition for many companies, and it is the undisputed industry leader. Consider, for example, that no fewer than five Chinese handset manufacturers have announced plans to establish R&D centers in India, which is expected to become the world’s second largest buyer of handsets. 51 Essential EdTech Tools By Category “50 Essential EdTech Tools By Category” was first seen on TeachThought. Technology and education are pretty intertwined these days and nearly every teacher has a few favorite tech tools that make doing his or her job and connecting with students a little bit easier and more fun for all involved. Yet as with anything related to technology, new tools are hitting the market constantly and older ones rising to prominence, broadening their scope, or just adding new features that make them better matches for education, which can make it hard to keep up with the newest and most useful tools even for the most tech-savvy teachers. Here, we’ve compiled a list of some of the tech tools, including some that are becoming increasingly popular and widely used, that should be part of any teacher’s tech tool arsenal this year, whether for their own personal use or as educational aids in the classroom.

How we will learn How Inquiry Can Enable Students to Become Modern Day de Tocquevilles Observations of early America by Alexis de Tocqueville helped articulate the nation’s values. With the guidance of an inquiry based teacher, students create their own interpretations of democracy in America. Starting Squid - Squid User Guide Squid should now be configured, and the directories should have the correct permissions. We should now be able to start Squid, and you can try and access the cache with a web browser. Squid is normally run by starting the RunCache script. RunCache (as mentioned ealier) restarts Squid if it dies for some reason, but at this stage we are merely testing that it will run properly: we can add it to startup scripts at a later stage. Programs which handle network requests (such as inetd and sendmail) normally run in the background. They are run at startup, and log any messages to a file (instead of printing it to a screen or terminal, as most user-level programs do.)

50 Great EdTech Tools for Teachers and Educators ~ Educational Technology and Mobile Learning April, 2015 Looking for some powerful EdTech tools to try out in your class or probably use for your professional development? This Symbaloo web mix created by Amy has you covered. The collection has around 50 wonderful educational tools and except for Knowable, an application we didn’t know before, all of the rest have been already reviewed here in the past. And if you ask us about our top 10 from this collection we would mention the following : 1- Socrative

101 Innovations in Scholarly Communication: How researchers are getting to grip with the myriad of new tools. There has been a surge of new scholarly communication tools in recent years. But how are researchers incorporating these tools into their research workflows? Jeroen Bosman and Bianca Kramer are conducting a global survey to investigate the choices researchers are making and why. Insights from these surveys will be valuable for libraries, research support, funders, but also for researchers themselves. Are we witnessing a major overhaul of scholarly communication rules and tools? In the last six months alone, this blog has featured posts on all phases of the research cycle. The new normal: virtual reality takes on the arts No wonder it is predicted that around the world we will spend $5.1bn (£3.7bn) on virtual-reality video games and hardware this year. By contrast, immersive technologies are having surprisingly little impact on film. Of course, computer-generated images have led to a revolution in the kind of stories that can be told on screen. Many of 2016’s most keenly anticipated films – Batman v Superman (out 25 March), The Jungle Book (out 15 April), Steven Spielberg’s The BFG (out 22 July) and the Harry Potter-inspired Fantastic Beasts and Where to Find Them (out 18 November) – rely on CGI to cast their spell.

Tech Tools by Subject and Skills Tech Tools by Subject and Skills Resources by Academic Subject Math FORUM: Improving education involves everyone NOVEMBER was parent-teacher conference season. My wife and I met with our kids' teachers. We are grateful for their instruction and try to be their allies. Teachers' Guide to The Use of SoundCloud in Class July 19, 2014 SoundCloud is a wonderful audio recording and sharing platform with huge potential for us in education. The distinctive set of features SoundCloud provides to its users have made it one of the most popular audio websites out there. As such, I deemed it important to create a guide that can help teachers tap into the educational potential of this tool.