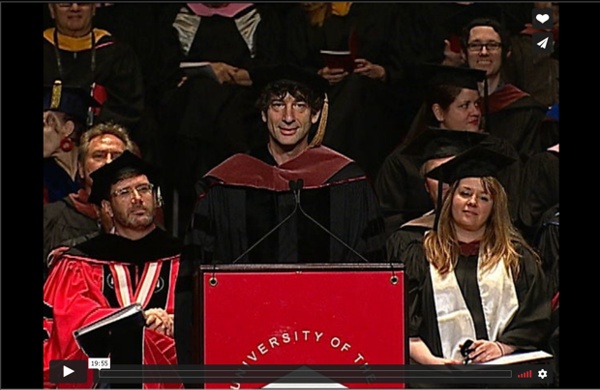 50 things to do this spring in Toronto 2015 Spring events and activities are particularly tantalizing this year after the vicious winter we narrowly survived. Now's the time to make the most of the weather. Toronto's arts, culture and food scenes kick into high gear over the next few months, and there's plenty to do outdoors. Spring is a great time to get out and enjoy the city. Here are 50 things to do in Toronto this spring.

Author Quote Posters - Design Being around a successful author would surely be exhausting and inspiring in equal amounts. As well as all that wisdom they put into their books, their thought-provoking one-liners would literally be falling out here, there and everywhere. So while you'd beat yourself up for not possessing even a smidgen of that kind of talent, you'd also be maniacally scribbling it all down for dinner party quoting. The rather smart Evan Robertson has created a set of posters that combine iconic author quotes with genius design work. If you don't want at least two of these hanging on your wall then we need to have a serious chat. Tags: books, Design, Posters How We Would Cast a Neil Gaiman Biopic Click to enlarge Neil Gaiman’s finest moment in life. Let’s pretend that a biopic of Neil Gaiman’s life is going to be made. It won’t really, at least as far as we know.

8 ways to keep your data secure (Photo: iStock)You are being tracked. A vast network of businesses is actively collecting data about you – and not just you, in the general sense, but specifically you. Your age, gender, income range, location, medical issues, and social connections, everything that describes you is fair game for data brokers. Companies like Acxiom and BlueKai have created an economy of online, automated surveillance, profiting from the collection and resale of user data to and from marketers, advertisers, and other brokers. The scale and reach of this industry can be disheartening, and avoiding its collective gaze increasingly difficult. Study shows maths experts are 'made, not born' (Medical Xpress)—A new study of the brain of a maths supremo supports Darwin's belief that intellectual excellence is largely due to "zeal and hard work" rather than inherent ability. University of Sussex neuroscientists took fMRI scans of champion 'mental calculator' Yusnier Viera during arithmetical tasks that were either familiar or unfamiliar to him and found that his brain did not behave in an extraordinary or unusual way. The paper, published this week (23 September 2013) in PloS One, provides scientific evidence that some calculation abilities are a matter of practice. Co-author Dr Natasha Sigala says: "This is a message of hope for all of us.

How To Actually Do The Stuff You Say You Want To Do So this time it's for real, right? The new diet. Quitting that soul-sucking job. On the Shelf: Neil Gaiman « A.K. Anderson Do you remember the book that made you fall in love with reading? Can you remember when you stopped struggling to understand the words and started caring about the story? Neil Gaiman will always hold a special place in my heart, because his book Odd and the Frost Giants was that book for Brett’s son.

About Christian Rayson, author of 'Born and Reborn: Book 1 of the Epic of Imsalan' Biography Christian Rayson is a Fantasy/Sci-Fi author/storyteller cynical optimist from Kansas. He voraciously consumes knowledge and stories, then spews the contents of his mind at anyone he can convince to listen. He reads and thinks far too much (Yes, this is possible). From Degrading to De-Grading March 1999 From Degrading to De-Grading By Alfie Kohn Pour lire cet article en français, cliquer ici. agoodmovietowatch Having only made its way to the U.S. 6 long years after its initial release, this is the long-awaited film from the Oscar-winning director of A Separation– and it is in every way extraordinary. It’s a movie stripped down of almost everything to keep only its humans in focus, it is honest and realistic beyond belief and quite simply a must-watch. A group of old friends and relatives reunite for vacation in northern Iran with one of them bringing a new person to the group, Elly, in hopes of her marrying one of the friends, Ahmad.