Whistles and Trekstock’s Designer Charity Collaboration. Whistles Launch First Unisex Collaboration. After successfully adding a menswear range to their artillery for autumn/winter 2014, Whistles have revealed their first offering to please both sides of the fence. 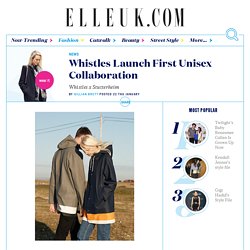 Teaming up with niche Scandi rainwear brand Stutterheim (fans include Kanye West and the ELLE fashion team) the result is two sleek yet simple raincoat designs. Buy the navy with orange and white stripes for yourself, and the grey with white and black stripes for your boyfriend to craftily acquire both. We’re all familiar with Whistles' dreamy, directional collections, but for those who don’t frequent the menswear section (or venture to Stockholm) too often, Stutterheim is a Swedish rainwear brand, founded in 2010 by Alexander Stutterheim. Whistles to focus on international growth - Design - Fashion-news.

Jane Shepherdson, chief executive at women's wear retailer Whistles has revealed plans to open more than 30 stores overseas during the next 5 years. 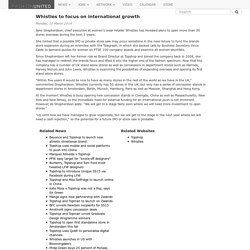 She hinted that a possible IPO or private stock sale may occur sometime in the near future to fund the brands store expansion during an interview with the Telegraph, in which she backed calls by Business Secretary Vince Cable to demand quotas for women on FTSE 100 company boards and examine all women-shortlists. Since Shepherdson left her former role as Brand Director at Topshop and joined the company back in 2008, she has managed to redirect the brands focus and lifted it into the higher end of the fashion spectrum. Now that the company has a number of UK stand alone stores as well as concessions in department stores such as Harrods, Harvey Nichols and John Lewis, Whistles is examining the possibilities of expanding overseas and opening its first stand alone stores. Jane Shepherdson, Chief Executive Officer, Whistles. LONDON, United Kingdom — Perhaps it’s not surprising that, in her spare time, Jane Shepherdson does flying trapeze in Hoxton, smack in the heart of achingly hip East London. 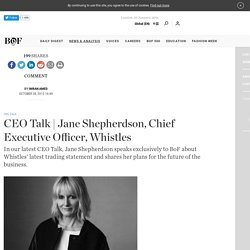 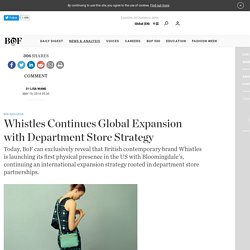 The move is part of a broader expansion strategy, kicked-off two and half years ago, that has seen the company partner with a number of premium department stores to dip its toes into international markets, including France, Germany, Russia and China. Since chief executive Jane Shepherdson, who made her name at Topshop, took the helm at the then-ailing middle-market womenswear retailer, Whistles has undergone a successful reboot, becoming known for its modern silhouettes and casual but on-trend pieces at affordable price points.

“We had decided that we would test the brand within a premium department store in all of the territories that we felt appropriate,” Shepherdson explained. How Whistles Reemerged as One of the Most Exciting Contemporary Brands in Fashion. 2008 was not an easy year for many in the fashion industry -- least of all, perhaps, for Jane Shepherdson. 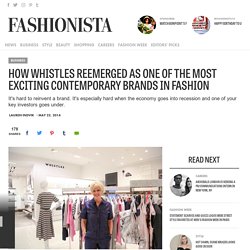 The former Topshop brand director, once described as "the most powerful woman on the high street," had just become chief executive of (and a substantial investor in) a fading British brand called Whistles. Days before the brand was scheduled to unveil its relaunch, Lehman Brothers collapsed. "It was terrible," Shepherdson recalls. "The whole year was just really, really stressful -- I lost about a stone.

" It's clear that things are not so terrible for Shepherdson now. To say that it's a busy time at Whistles is an understatement. We asked Shepherdson about how Whistles survived -- and reinvented itself -- during those tough early years, its plans for international expansion and its hopes for a show at New York Fashion Week. You started at Whistles seemingly at the worst possible time -- right before the Lehman collapse. Yes, it was terrible. What was the turning point? No, it isn't. Jane Shepherdson. Chief Executive at Whistles, Jane Shepherdson is the figurehead of our brand. 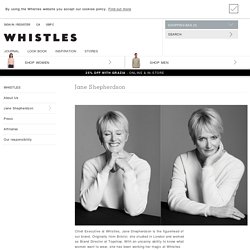 Originally from Bristol, she studied in London and worked as Brand Director at Topshop. With an uncanny ability to know what women want to wear, she has been working her magic at Whistles since 2008. Here, we find out a bit more about her world.