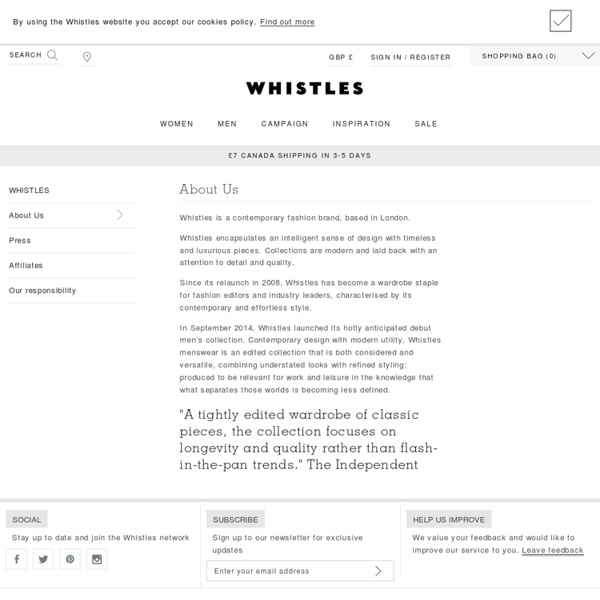 Whistles is a contemporary fashion brand, based in London. Led by inspiring CEO Jane Shepherdson, Whistles encapsulates an intelligent sense of design with timeless and luxurious pieces. Collections are modern and laid back with an attention to detail and quality. Since its relaunch in 2008, Whistles has become a wardrobe staple for fashion editors and industry leaders, characterised by its contemporary and effortless style. "Jane has reinvented this brand… into a sleek directional force to be reckoned with." The Observer In September 2014, Whistles launched its hotly anticipated debut men’s collection. "A tightly edited wardrobe of classic pieces, the collection focuses on longevity and quality rather than flash-in-the-pan trends."

Jane Shepherdson Chief Executive at Whistles, Jane Shepherdson is the figurehead of our brand. Originally from Bristol, she studied in London and worked as Brand Director at Topshop. With an uncanny ability to know what women want to wear, she has been working her magic at Whistles since 2008. Here, we find out a bit more about her world. Can you describe what you do at Whistles? Inspiration, Ways To Wear, Whistles Women <div class="browser-compatibility-alert"><p class="browser-error">Your browser's Javascript functionality is turned off. Please turn it on so that you can experience the full capabilities of this site.</p></div> How Whistles Reemerged as One of the Most Exciting Contemporary Brands in Fashion 2008 was not an easy year for many in the fashion industry -- least of all, perhaps, for Jane Shepherdson. The former Topshop brand director, once described as "the most powerful woman on the high street," had just become chief executive of (and a substantial investor in) a fading British brand called Whistles. Days before the brand was scheduled to unveil its relaunch, Lehman Brothers collapsed. "It was terrible," Shepherdson recalls. "The whole year was just really, really stressful -- I lost about a stone." It's clear that things are not so terrible for Shepherdson now.

Jane Shepherdson, Chief Executive Officer, Whistles LONDON, United Kingdom — Perhaps it’s not surprising that, in her spare time, Jane Shepherdson does flying trapeze in Hoxton, smack in the heart of achingly hip East London. Right from her earliest days in the fashion industry, Shepherdson has been known for taking risks and having her finger on the pulse of what’s cool. After getting her start as an assistant buyer at Topshop, back in 1984, Shepherdson spent twenty years working her way up the ladder to become Topshop’s brand director, effectively overseeing the retail, product, finance, HR and property departments of a company that, under her leadership, was transformed into a globally recognised brand, emblematic of the dynamic nature of British high street fashion. But in 2006, one week after Topshop boss Sir Phillip Green announced a now-defunct fashion collaboration with Kate Moss, Shepherdson abruptly resigned. Shepherdson’s next move was closely watched.

Stutterheim x Whistles Stutterheim for Whistles: Collaboration Stutterheim raincoats are renowned for quality. This collaboration combines Swedish craftsmanship with contemporary British design. Pieces are refined and functional, designed for both men and women. Strictly anti-mass production, this is Stutterheim's first collaboration with a clothing brand. Whistles conquers the 'middle market' of British womenswear While Marks & Spencer announced a 6.8% drop of general sales last month, another corner of the British high street has been quietly flourishing. Whistles, the clothing brand set up by Lucille Lewin in the 1980s, announced this week that it had bought back the majority of its shares from the Icelandic government, a move which has underlined its growing strength. Whistles, which has been independent since parting ways with the retail group Mosaic in 2008, has gone from strength to strength despite a tough economic climate. Sales were up 13% in 2011 and there was "consistent double digit like for like sales growth," this year, according to a company statement. Whistles is also the bestselling premium high street brand on Asos, the online retailer. It had been part-owned by the Icelandic government since the banking crises of 2008, when shares owned by the collapsed bank Glitnir were transferred to its ownership.

Store List <div class="browser-compatibility-alert"><p class="browser-error">Your browser's Javascript functionality is turned off. Please turn it on so that you can experience the full capabilities of this site.</p></div> Store list An exclusive backstage look at spring/summer 2015 An exclusive backstage look at spring/summer 2015 Spring/summer 2015 comes to Whistles in a collection that tweaks seasonal dressing to make a modern wardrobe. With the laidback feel of a tropical escape, but the clean lines of an urban landscape, the result is an onbrand versatility. Whistles has become a go-to destination for clothes that work hard but look effortless.