Whistles and Brand Values on Behance. Aitor Throup’s New Object Research. Like the elephant, it seems Aitor Throup has been carrying his baby for the longest recorded time on earth. 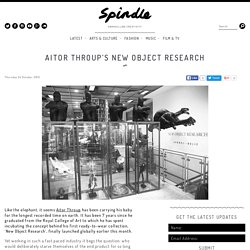 It has been 7 years since he graduated from the Royal College of Art to which he has spent incubating the concept behind his first ready-to-wear collection, ‘New Object Research’, finally launched globally earlier this month. Yet working in such a fast paced industry it begs the question: who would deliberately starve themselves of the end product for so long where other designers would barter with their own body parts if they could to win back an extra hour from the clock? It certainly draws my nose towards what happens behind the scenes of Throup’s unique and mysteriously long approach, when all around other freshly graduated designers every season are groping at survival.

To them, this is 14 collections he is behind on. NEW OBJECT RESEARCH '13 CATALOGUE. High-concept outlet from H&M influenced by fashion bloggers. H&M, the world's second largest fashion chain, opens its latest retail venture in London on Friday. 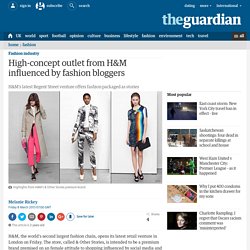 The store, called & Other Stories, is intended to be a premium brand premised on an female attitude to shopping influenced by social media and blogging. The 1,200 square metre store on Regent Street is neither a conventional H&M store, of which there are 2,800 in 43 countries, nor one of its more grown-up design-led fashion stores, called COS, which launched in the UK in 2007. The clue is in the name. Studio Visit: Endrime Denim - WGSN/INSIDER. Arlier this week the Stylesight Denim team headed over to the design studio of Mohsin Sajid’s Endrime to take a close look at the newly launched label. 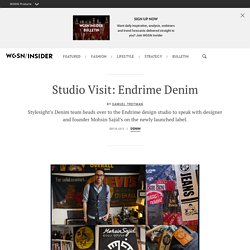 3 Ways to Save a Picture from Instagram. @trijack. Samuel Trotman (@samutaro) Patagonia's new denim line is changing things for the better. F you’re a regular reader of the WGSN denim blog you’ll no doubt have read our recent articles on sustainability in denim. 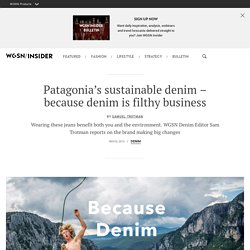 From Kingpins Founder Andrew Olah’s in-depth discussion on the need for change in denim manufacturing to the inspiring story behind Nudie Jeans eco-ethics, these articles have helped to increase awareness and educate our readers on this crucial issue. While many denim brands are dipping their toes into sustainable lines, there are very few who are making conscious efforts to improve and change the way we, as consumers, think about buying our jeans and the impact our purchases have on social and environmental areas. Denim production typically involves the use of dangerous chemicals to grow conventional cotton and creates millions of gallons of wastewater in the dyeing process.

Print and Pattern. Graffiti Florals…Torstrasse, Berlin Resi, who works at the Y-3 shop on Torstrasse, in a top by Andrea Crews, vintage trousers and Y-3 sneakers. 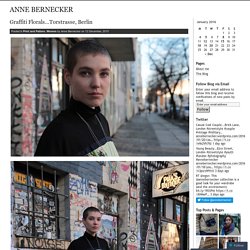 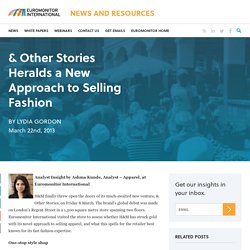 The brand’s global debut was made on London’s Regent Street in a 1,200 square metre store spanning two floors. Euromonitor International visited the store to assess whether H&M has struck gold with its novel approach to selling apparel, and what this spells for the retailer best known for its fast fashion expertise. One-stop style shop Upon entering & Other Stories consumers are immediately struck by the unconventional juxtaposition of products. This lack of compartmentalisation is a key facet of the & Other Stories brand ethos.

Visual merchandising drives emotional connections This ethos is evident in the product as well. A digital era brand. The Top Menswear Moments Of 2014. 2014’s Top Menswear Moments That we spent several hours bickering over what should actually appear in this list is testament to the fact that men’s style is no longer merely having a moment, but is rather an increasingly important fixture in the fashion industry, gaining cultural traction and generating plenty of money. 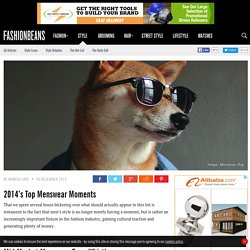 Here, we review menswear’s most memorable moments in 2014… Mid-Market Menswear From Whistles This year, Whistles joined a growing list of brands, like Jigsaw and Toast, launching new men’s collections in the hopes of replicating their success in the womenswear arena. Whistles’ debut menswear collection, designed by Design Director Nick Passmore, launched into twenty-two stores nationwide for the autumn/winter 2014 season, containing over 100 pieces ranging from a grey cashmere tracksuit to a black sheepskin flying jacket. Whistles' move into menswear: what does it mean for men's fashion? The news that Whistles is moving into menswear is enough to put spring in one's step – whatever your gender. 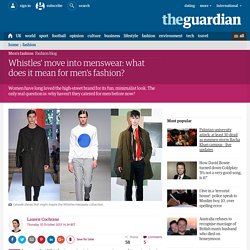 The high-street brand has come to be treasured by women who love smart, useful (but never boring) clothes that appeal to minimalist sensibilities while keeping fun on the agenda . That's a brand DNA that hits the ground running in menswear. While no images have been released as yet, you imagine these pieces will sit next to those inclined to Cos and – when they're feeling flush – Lanvin, Raf Simons or a printed sweatshirt from Givenchy. The introduction of menswear comes on the back of more excellent financial results for the growing brand. Sales went up 24% in 2012. Inside The Industry with Jane Shepherdson, Chief Executive of Whistles. Professor Frances Corner OBE, Head of London College of Fashion, welcomed Jane Shepherdson, Chief Executive of Whistles to John Prince’s Street last night for an Inside The Industry conversation about transforming brands, global economics and venturing into menswear. 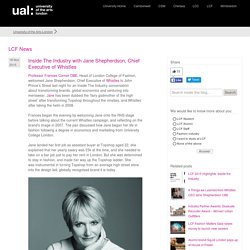 Jane has been dubbed the ‘fairy godmother of the high street’ after transforming Topshop throughout the nineties, and Whistles after taking the helm in 2008. Frances began the evening by welcoming Jane onto the RHS stage before talking about the current Whistles campaign, and reflecting on the brand’s image in 2007. The pair discussed how Jane began her life in fashion following a degree in economics and marketing from University College London. Jane landed her first job as assistant buyer at Topshop aged 22, she explained that her yearly salary was £5k at the time, and she needed to take on a bar job just to pay her rent in London. Whistles Mayfair Flagship - Just Opened London. The Facts NAME WhistlesIT'S A Flagship StoreOPENED 31st January 2013WHO'S BEHIND IT Chief Executive Jane Shepherdson (former Brand Director of Topshop)DID YOU KNOW Whistles will make its London Fashion Week debut this FebruaryLOCATION MayfairNEAREST TUBE Green ParkWEBSITEwww.whistles.co.ukMAPView MapOPENING HOURS Mon-Friday: 10am-7pm. 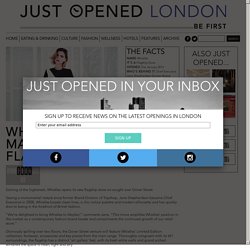