Is Social Media Sabotaging Real Communication? On a crisp Friday afternoon last October, Sharon Seline exchanged text messages with her daughter who was in college. 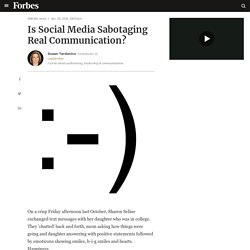 They 'chatted' back and forth, mom asking how things were going and daughter answering with positive statements followed by emoticons showing smiles, b-i-g smiles and hearts. Happiness. Later that night, her daughter attempted suicide. In the days that followed, it came to light that she’d been holed up in her dorm room, crying and showing signs of depression -- a completely different reality from the one that she conveyed in texts, Facebook posts and tweets. As human beings, our only real method of connection is through authentic communication. This is where social media gets dicey. Awash in technology, anyone can hide behind the text, the e-mail, the Facebook post or the tweet, projecting any image they want and creating an illusion of their choosing. This presents an unprecedented paradox. A New Set of Communication Barriers We Need a New Golf Course Address your issues. The Neuroscience Of Emoticons. Nonverbal Communication In a Digital World.

No one can deny the enormous benefits brought by digital communication. 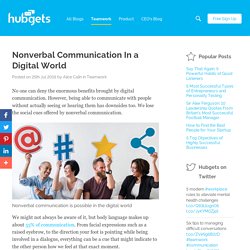 However, being able to communicate with people without actually seeing or hearing them has downsides too. We lose the social cues offered by nonverbal communication. We might not always be aware of it, but body language makes up about 55% of communication. From facial expressions such as a raised eyebrow, to the direction your foot is pointing while being involved in a dialogue, everything can be a cue that might indicate to the other person how we feel at that exact moment. Another 38% of communication is expressed through the tone of our voice, and only 7% through words. Digital nonverbal communication Even though digital communication is mostly typing down words, there are still some nonverbal components that add context and give out social cues. Emoticons Originating in the early 1980s, emoticons added a new dimension to digital communication. Indicates a smiley face, for Japanese people that would be a ^_^ GIFs.

Has Technology Killed Face-To-Face Communication? Most of us use our cell phones and computers to inform, make requests of, and collaborate with co-workers, clients and customers. 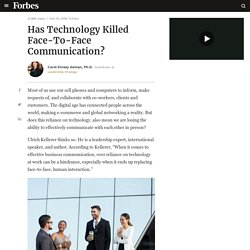 The digital age has connected people across the world, making e-commerce and global networking a reality. But does this reliance on technology, also mean we are losing the ability to effectively communicate with each other in person? Ulrich Kellerer thinks so. He is a leadership expert, international speaker, and author. According to Kellerer, “When it comes to effective business communication, over reliance on technology at work can be a hindrance, especially when it ends up replacing face-to-face, human interaction.” Carol Kinsey Goman: You were the founder and CEO of Faro Fashion in Munich, Germany. Ulrich Kellerer: The digital age has fundamentally changed the nature and function of business communication.

However, I’ve also seen the negative impact of digital communication on business both internally and externally. Goman: Agreed! The Digital Age: Why Face-to-Face Communication Is Still More Powerful - Young Upstarts. By Ulrich Kellerer, author of “One Moment Can Change Your Life! 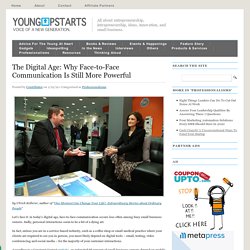 : Extraordinary Stories about Ordinary People“ Let’s face it: in today’s digital age, face-to-face communication occurs less often among busy small business owners. Sadly, personal interactions seem to be a bit of a dying art. In fact, unless you are in a service-based industry, such as a coffee shop or small medical practice where your clients are required to see you in person, you most likely depend on digital tools – email, texting, video conferencing and social media – for the majority of your customer interactions. According to a Constant Contact statistic, an estimated 66 percent of small business owners depend on mobile devices to manage their operations.

While no one can deny the convenience of digital communication tools and their importance to today’s entrepreneurs and small businesses, there’s still something powerful about face-to-face interactions they simply can’t replicate. The Human Element is Still Best. Face to face communication.