Tesla: How to Leverage Social Media to Build a Top Brand. Northwestern Mutual's Latest Integrated Campaign Celebrates Advisor-Client Relationships. The Organization Behind 'Got Milk?' Debuts a Weekly Web Series. The California Milk Processor Board (CMPB), the organization behind the famous “Got Milk?” 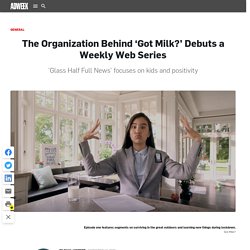 Tagline, is getting into the content game. Today, it’s debuting its first weekly web series, “Glass Half Full News.” The kid-centric show has the format of a traditional TV news broadcast, with an anchor and field correspondents, but the content isn’t as much about relaying timely information as it is about exploring a child’s perspective of life in 2020 among amusing jokes and cartons of generic milk. The premiere episode features segments on surviving in the great outdoors—in this case, the backyard—and learning new things while under lockdown, like mom’s real hair color. Glass Half Full News | Episode 1 Volume 90% Press shift question mark to access a list of keyboard shortcuts Play/PauseSPACE Increase Volume↑ Decrease Volume↓ Seek Forward→ 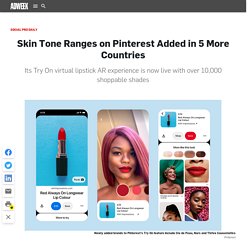 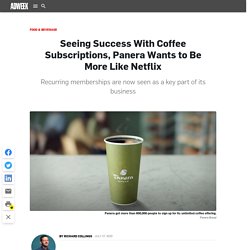 The promotion, which began June 22 to remind customers about the subscription service, is all part of the bakery’s plan to incorporate a recurring revenue model similar to Netflix, according to chief brand and concept officer Eduardo Luz. The subscription includes unlimited hot and iced coffee as well as hot tea and typically costs $8.99 per month, but that fee was waived this summer. So far, more than 800,000 people have opted into the subscription as of the week ended July 18. 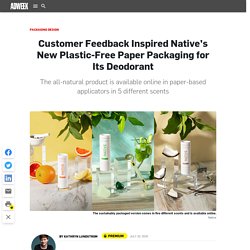 Starting with its paper-based deodorant applicator, the brand has committed to offering every one of its soaps, deodorants and toothpastes in sustainable packages by 2023. While there’s certainly a trend toward more environmentally conscious packaging in the consumer packaged goods industry, Native said the impetus to shift to sustainability came from its consumers. In late 2018, customers started voicing concerns about plastic-free packaging to Native. The company’s tracking of those requests on its social channels, customer service calls and surveys found that over the past year, requests for sustainable packaging increased by more than 900%. Last summer, Native hit a tipping point, according to senior marketing manager and head of sustainability, Katie Weltz.

Essity Is Breaking Taboos Around Periods in Its Advertising. Everyone’s familiar with the classic format for a pad or tampon commercial: smiling women clad head-to-toe in white, flying across the screen in bursts of femininity and energy, not slowed down one bit by that pesky menstrual cycle, the color red avoided at all costs. 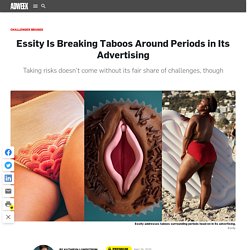 In the last few years, however, brands have worked to create a more honest portrayal of what it’s like to have a period. That work has won awards, gone viral and proven that breaking taboos in advertising to women is not only good for society but of strategic importance for brands that operate in this space. The feminine care category has an “even greater responsibility” than most to treat women respectfully, especially in the face of a stigma “that it’s contributed to for decades,” said AMV BBDO executive creative director Nadja Lossgott. 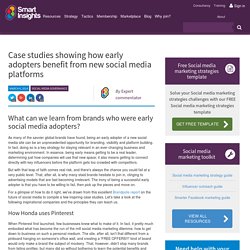 In fact, doing so is a key strategy for staying relevant in an ever-changing business and marketing environment. In essence, being early means getting to be a real leader, determining just how companies will use that new space; it also means getting to connect directly with key influencers before the platform gets too crowded with competitors. 9 Successful Digital Marketing Case Studies. Intuit Case Study At Single Grain, we worked with the tax preparation software company Intuit to boost visibility via several common keywords in the industry. 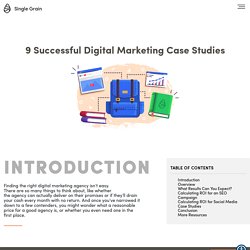 Source: Single Grain case studies At the time, Intuit was adding on the Intuit Website Builder as part of their product portfolio. Based on their research, they found that their customers wanted simple tools for other aspects of their business as well, such as building their website. The challenge for us was helping Intuit build visibility and become known for services outside of the main ones for which they are known. To solve that, we helped Intuit build visibility in organic search results. 3 Success Stories That Will Have You Rethink Email Marketing. Despite the perception of email as a more traditional and antiquated tactic, it remains one of the best digital marketing channels for return on investment. 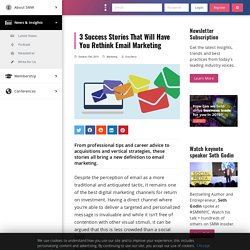