Facebook’s newest proof-of-concept VR headset looks like a pair of sunglasses. Facebook has shown off a new proof-of-concept virtual reality headset, and it has a completely different design than most other VR devices on the market today. 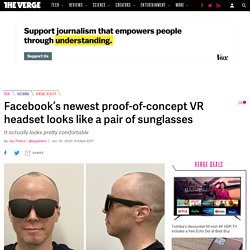 Instead of a bulky contraption that covers up the top half of your face and has to be strapped to your head, this proof-of-concept headset looks kind of like a pair of large sunglasses that can sit comfortably on your ears. Yet Facebook is billing this new device as not a pair of augmented reality glasses, as common conceptions of AR devices go, but a legitimate VR product. They’re very thin, with a display thickness of less than 9mm, and Facebook claims they have a field of view that’s “comparable to today’s consumer VR products.”

Here’s a top-down view: The proof-of-concept glasses aren’t just thin for looks, though — they also apparently beam images to your eyes in a way that’s different than standard VR headsets on the market today. This GIF from Facebook helps visualize how both techniques work together: XR-Learn. Smart glasses that replace phones may be the next hottest tech trend. A visitor tries out Lenovo augmented reality glasses with the Star Wars Jedi Challenges during the Mobile World Congress in Barcelona, Spain, February 26, 2018. 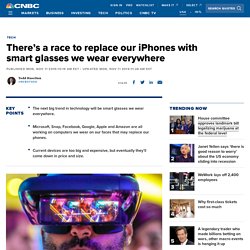 Yves Herman | Reuters Most of the biggest names in Big Tech are racing to create smart glasses that we wear everywhere and that may replace our phones. Microsoft, Amazon, Google, Snap, Facebook Apple, Magic Leap and others are all working on some form of smart glasses or headset that will change how we view the world around us. AR/VR Learning & Creation. 3DBear - Creative Storytelling in Augmented Reality (AR) Virtual Reality and Public Library Tech - StateTech Magazine. Still, the library was only getting seven or eight people to show up for such programs, according to Jones, making it difficult to justify the marketing and staffing efforts, as well as the setup time and expenses. 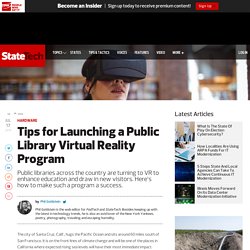 “Where we’re at today is a strategy of synergizing with other programs,” Jones says. “We’re not trying to do standalone VR events. We’re taking a break on that. We’re finding opportunities that might benefit from the enhancement of a VR experience and joining up with other events.” In addition to the climate change program, those include a telescope-lending program that enables users to experience outer space in virtual reality. At Topeka & Shawnee, there is not a permanent VR hardware display, but the library is about to purchase an Oculus Quest and a lower-end HTC VIVE product when it comes out, King says. The State of VR in 2019, and Where Things Are Going. How Virtual Reality Will Transform Medicine. If you still think of virtual reality as the province of dystopian science fiction and geeky gamers, you had better think again. 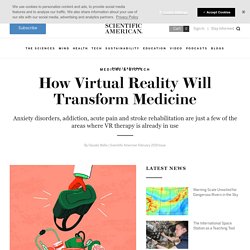 Faster than you can say “Ready Player One,” VR is starting to transform our world, and medicine may well be the first sector where the impact is profound. Behavioral neuroscientist Walter Greenleaf of Stanford University has been watching this field develop since the days when VR headsets cost $75,000 and were so heavy, he remembers counterbalancing them with a brick. Today some weigh about a pound and cost less than $200. Gaming and entertainment are driving current sales, but Greenleaf predicts that “the deepest and most significant market will be in clinical care and in improving health and wellness.” Even in the early days, when the user entered a laughably low-resolution world, VR showed great promise. Another success came in the wake of 9/11. Virtual reality in public libraries. 9 industries using virtual reality.

Virtual reality has been tied to gaming for a while, but as the technology progresses, more and more uses are surfacing. 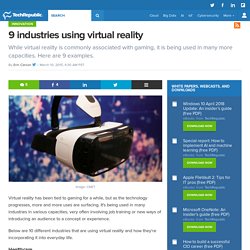 It's being used in many industries in various capacities, very often involving job training or new ways of introducing an audience to a concept or experience. Below are 10 different industries that are using virtual reality and how they're incorporating it into everyday life. Healthcare Virtual reality has multiple applications for healthcare. One use, which is actually not brand new, is the use of VR in therapy. Medical journal Frontiers in Neuroscience published a study last year on the use of virtual reality to treat the phantom limb pain of people who have lost limbs. Entertainment Entertainment will likely be one of the first and strongest examples of the change virtual reality will bring to the industry, and gaming is one of the most obvious uses. 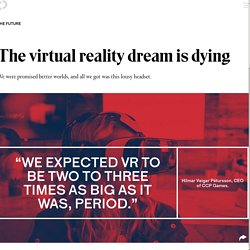 “We expected VR to be two to three times as big as it was, period,” Pétursson told gaming site Destructoid just a few days ago, adding, “You can't build a business on that.” There's a chance the company could jump back in, but their own data showed adoption was slow, even among enthusiasts. “The important thing is we need to see the metrics for active users of VR. Expeditions. EdWebet90 - AR/VR/MR.