Only 2% of UK children have the critical literacy skills they need to tell if news is real or fake. The Side Eye: Kings and Commoners. Critical thinking is a key skill in media and information literacy, and the mission of libraries is to educate and advocate its importance. Discussions about fake news has led to a new focus on media literacy more broadly, and the role of libraries and other education institutions in providing this.

When Oxford Dictionaries announced post-truth was Word of the Year 2016, we as librarians realise action is needed to educate and advocate for critical thinking – a crucial skill when navigating the information society. IFLA has made this infographic with eight simple steps (based on FactCheck.org’s 2016 article How to Spot Fake News) to discover the verifiability of a given news-piece in front of you. Download, print, translate, and share – at home, at your library, in your local community, and on social media networks. The more we crowdsource our wisdom, the wiser the world becomes. Librarians take up arms against fake news. Librarians are stepping into the breach to help students become smarter evaluators of the information that floods into their lives. 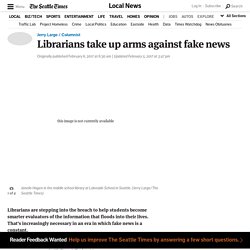 Besides running the library, Hagen said, she teaches a class called “digital life.” Newswise. Stephanie Busari: How fake news does real harm. The spread of true and false news online. Lies spread faster than the truth There is worldwide concern over false news and the possibility that it can influence political, economic, and social well-being. To understand how false news spreads, Vosoughi et al. used a data set of rumor cascades on Twitter from 2006 to 2017. About 126,000 rumors were spread by ∼3 million people. False news reached more people than the truth; the top 1% of false news cascades diffused to between 1000 and 100,000 people, whereas the truth rarely diffused to more than 1000 people.

Falsehood also diffused faster than the truth. Science, this issue p. 1146 Abstract. The (almost) complete history of 'fake news' Media playback is unsupported on your device In record time, the phrase morphed from a description of a social media phenomenon into a journalistic cliche and an angry political slur. 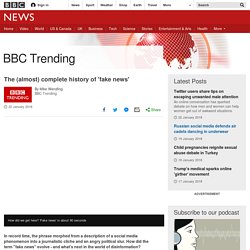 How did the term "fake news" evolve - and what's next in the world of disinformation? It was mid-2016, and Buzzfeed's media editor, Craig Silverman, noticed a funny stream of completely made-up stories that seemed to originate from one small Eastern European town. "We ended up finding a small cluster of news websites all registered in the same town in Macedonia called Veles," Silverman recalls. He and a colleague started to investigate, and shortly before the US election they identified at least 140 fake news websites which were pulling in huge numbers on Facebook. The young people in Veles may or may not have had much interest in American politics, but because of the money to be made via Facebook advertising, they wanted their fiction to travel widely on social media.

How to Spot Fake News. Protect yourselves From Fake News. For those raised in the information age, life without the internet is no life at all. 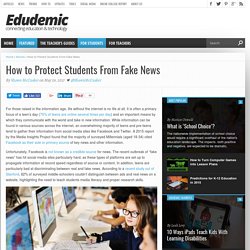 It is often a primary focus of a teen’s day (75% of teens are online several times per day) and an important means by which they communicate with the world and take in new information. While information can be found in various sources across the internet, an overwhelming majority of teens and pre-teens tend to gather their information from social media sites like Facebook and Twitter. A 2015 report by the Media Insights Project found that the majority of surveyed Millennials (aged 18-34) cited Facebook as their sole or primary source of key news and other information. Unfortunately, Facebook is not known as a credible source for news. How new is fake news? President Donald Trump’s administration is accused of disseminating “fake news” to the shock of the media, tens of millions of Americans, and to many others around the world. 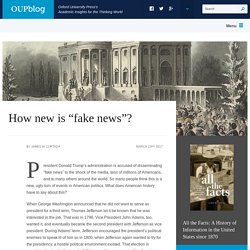 So many people think this is a new, ugly turn of events in American politics. What does American history have to say about this? When George Washington announced that he did not want to serve as president for a third term, Thomas Jefferson let it be known that he was interested in the job. That was in 1796. 10 Good Tips To Spot Fake News. April 15, 2017 A few days ago we shared with you a new Google feature that allows you to easily fact check online content. 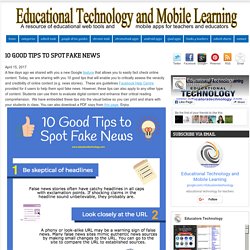 Today, we are sharing with you 10 good tips that will enable you to critically assess the veracity and credibility of online content (e.g. news stories). These are guidelines Facebook Help Centre provided for it users to help them spot fake news. The Fake-News Fad: Let it Fade. Have you heard the news? 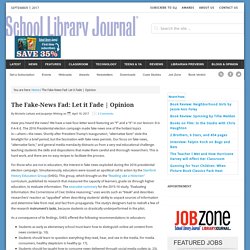 We have a new four-letter word featuring an “F” and a “K” in our lexicon: It is F-A-K-E. The 2016 Presidential election campaign made fake news one of the hottest topics in—ahem—the news. Shortly after President Trump’s inauguration, “alternative facts” stole the limelight for a brief period, but the fascination with fake news persists. Our focus on fake news, “alternative facts,” and general media mendacity distracts us from a very real educational challenge: teaching students the skills and dispositions that make them careful and thorough researchers. This is hard work, and there are no easy recipes to facilitate the process. Fake news sites designed to trick you. How false news can spread. Fake News. It’s no secret that the topic of fake news is widely prevalent in our culture today, but while adults grapple with how to discern the credible from the false stories, where does that leave our students? 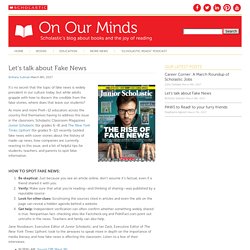 As more and more PreK–12 educators across the country find themselves having to address this issue in the classroom, Scholastic Classroom Magazines Junior Scholastic (for grades 6–8) and The New York Times Upfront (for grades 9–12) recently tackled fake news with cover stories about the history of made-up news, how companies are currently reacting to this issue, and a list of helpful tips for students, teachers, and parents to spot false information. Jane Nussbaum, Executive Editor of Junior Scholastic, and Ian Zack, Executive Editor of The New York Times Upfront, took to the airwaves to speak more in depth on the importance of media literacy and how fake news is affecting the classroom. Listen to a few of their interviews: 5 Ways to Spot Fake News Video.

The Media: Separating Fact from Fiction. An informed citizenry is vital to democracy. 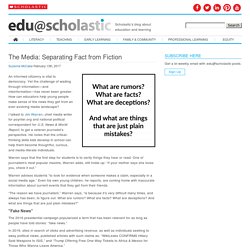 Yet the challenge of wading through information—and misinformation—has never been greater. How can educators help young people make sense of the news they get from an ever-evolving media landscape? I talked to Jim Warren, chief media writer for poynter.org and national political correspondent for U.S. Can You Tell Fake News From Real? Study Finds Students Have 'Dismaying' Inability. Stanford researchers assessed students from middle school to college and found they struggled to distinguish ads from articles, neutral sources from biased ones and fake accounts from real ones. 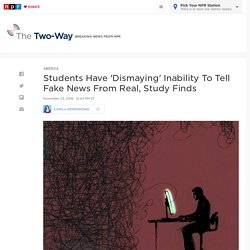 Gary Waters/Ikon Images/Getty Images hide caption toggle caption. Fake news and how to spot it. A characteristic of fake news is that it is distributed rapidly and widely through social media, usually by unsuspecting internet users. 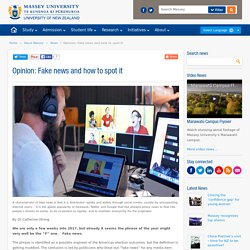 It is the global popularity of Facebook, Twitter and Google that has allowed phony news to flow into people’s homes so easily, to be re-posted so rapidly, and to maintain anonymity for the originator. By Dr Catherine Strong We are only a few weeks into 2017, but already it seems the phrase of the year might very well be the “F” one. Fake news. Fake News Is Here: Help Students Detect It. We highly recommend that teachers explore the New York Times Learning Network article (1/19/17) sharing many lesson ideas and resources (including this post): Evaluating Sources in a ‘Post-Truth’ World: Ideas for Teaching and Learning About Fake News. By Frank W. Baker. Will we now take information literacy skills seriously? I keep having to bite my tongue a lot late from muttering, "People are idiots.

" I am sure many are doing the same when they look at me. But there you are. The Honest Truth about Fake News. The information war is real, and we’re losing it. Fake news and the future of journalism. How “News Literacy” Gets the Web Wrong. Fake News Should Die… Or Should It? 5 ways to teach kids about Fake News. Fake News, Alternative Facts and Librarians As Dedicated Defenders of Truth. How to choose your news. Is technology smart enough to fix the fake news frenzy? The debate about “fake news” and the “post-truth” society we now supposedly inhabit has become the epistemological version of a feeding frenzy: so much heat, so little light.

Two things about it are particularly infuriating. The first is the implicit assumption that “truth” is somehow a straightforward thing and our problem is that we just can’t be bothered any more to find it. The second is the failure to appreciate that the profitability, if not the entire business model, of both Google and Facebook depends critically on them not taking responsibility for what passes through their servers. So hoping that these companies will somehow fix the problem is like persuading turkeys to look forward to Christmas. What we learned in 2016 was the depth of the hole that digital technology has enabled us to dig for ourselves. Rereading Lippmann, particularly his Public Opinion and The Phantom Public, is a sobering experience at the moment.

. • Comments will be switched on later. All I Know Is What’s on the Internet. All I Know Is What’s on the Internet Information literacy is not the antidote to fake news, because the institutions for teaching it can’t be trusted either Rolin Moe January 17, 2017 share Image: "Lost in Reflection" from Night Shift by Guillaume Lachapelle. Fake news elected Donald Trump. At least, judging by media attention — social or otherwise — one might come to that conclusion. Though they may profit from a culture of obfuscation, fake-headline writers did not build it alone.