Can You Tell Fake News From Real? Study Finds Students Have 'Dismaying' Inability 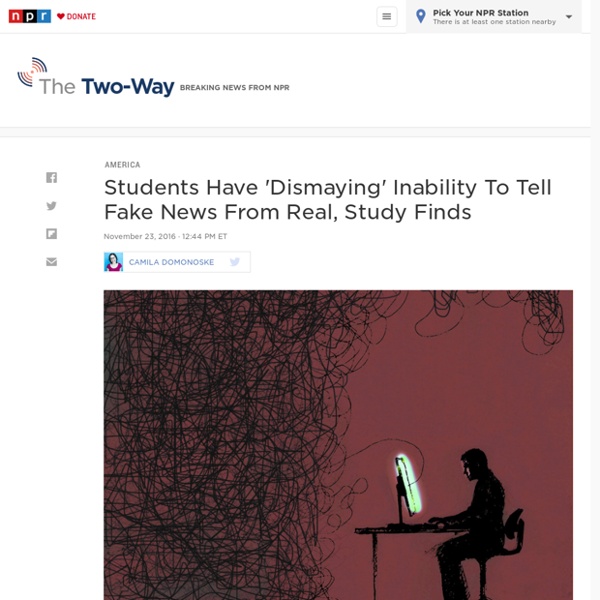 Related:  How to Think Critically. Fake News • What the Hell • FALSE/Misleading Information • LITERACY(ies)

Fake news? Bias? How colleges teach students not to be duped Media literacy — some say media illiteracy — is having a moment. And professors are ready to respond. Advertisment 1 of 2 This is Why Media Literacy Matters in a Transforming World Media literacy has become a more important consideration in our children’s futures than ever. It behooves educators to be familiar with media’s role in our changing world. Media is here to stay as a main component of how society shares information across a vast population quickly. While some teachers fear it, others are realizing the potential to reach more students through things that our digital natives are familiar with. When importance is given to finding and harnessing ways that students learn best, the modern teacher benefits as much as students.

The tricks propagandists use to beat science Back in the 1950s, health professionals became concerned that smoking was causing cancer. Then, in 1952, the popular magazine Reader’s Digest published “Cancer by the Carton,” an article about the increasing body of evidence that proved it. The article caused widespread shock and media coverage. Today the health dangers of smoking are clear and unambiguous. And yet smoking bans have been slow to come into force, most having appeared some 40 years or more after the Reader’s Digest article. The reason for this sluggishness is easy to see in hindsight and described in detail by Naomi Oreskes and Erik Conway in their 2010 book Merchants of Doubt.

s guide to fake news websites and what they peddle At first look, BostonTribune.com certainly seems a trustworthy source. So does KMT11.com. And ABCNews.com.co. Even 24wpn.com has an official ring to it. But all of these websites peddle bogus stories, either by making up fake news or sharing it from other sources. And it’s not always apparent to readers that’s the case.

Teaching Global Digital Citizenship? Use These 10 Essential Questions Teaching Global Digital Citizenship is all about asking the right questions. Today kids are building the foundations of a digital culture. They are contributors, creators, communicators, and designers. They author, produce and provide digital information all the time. We can ask them challenging questions and get insightful answers!

"fake news" not new 2 clicks Donald Trump may well be remembered as the president who cried “fake news.” It started after the inauguration, when he used it to discredit stories about the size of the crowd at his inauguration. He hasn’t let up since, labeling any criticism and negative coverage as “fake.” Here’s a handy cheat sheet of false and misleading “news” sites — Quartz Earlier this month, the California department of health released guidelines warning residents to avoid putting mobile phones up to their heads. “Keep your phone away from your body,” the state health department writes. “Although the science is still evolving, some laboratory experiments and human health studies have suggested the possibility” that typical long-term cell phone use could be linked to “brain cancer and tumors of the acoustic nerve,” “lower sperm counts,” and “effects on learning and memory.”

Es troubling... such a critical skill. Love to get a look at what kind of tool they developed to measure the students' performance. by sassylpt Feb 1