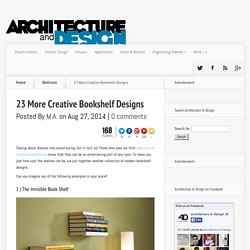 Those who saw our first selection of creative bookshelves know that they can be an entertaining part of any room. To show you just how cool the shelves can be, we put together another collection of modern bookshelf designs. Data-Driven Architecture — re:form. A few years ago, a group of UCLA anthropologists and archeologists conducted one of the most thorough studies of how people live in the United States. 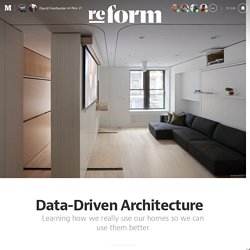 The study took 32 middle-class Los Angeles families and observed them as they went about their days, going beyond superficial notions of how people live and into the real nuts and bolts of daily home life. Out of this study came the book, “Life at Home in the 21st Century,” an unflinching look at the often harried state of the modern American family. One particularly interesting part of the book tracked the families’ movements every 10 minutes over two weekday afternoons and evenings, observing how they use their homes.

Fundamental #13. Top left: Doha, Qatar; the city center is at the top right, the industrial area, home to the migrant camps, is at the left, outlined. 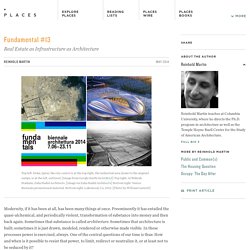 [Image from Google Earth via SAMAJ] Top right: Al Wakrah Stadium, Zaha Hadid Architects. [Image via Zaha Hadid Architects] Bottom right: Venice Biennale promotional material. Www.anthropoceneobservatory.net. Territorial Agency. Fountain House. Reexamining the fountain: in contemporary urban as well as cultural discussions we see a renaissance of the idea of common space, in german either translated as “Allmende” or “Gemeinschaft” depending on a relationship towards (city) space or social structures. 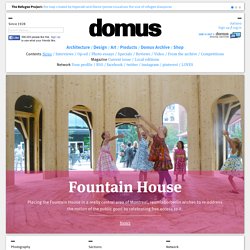 This is related to the dipole of the private vs. the public as the two dominant categories of the 20th century. Now in the 21st century we find many ways of being together as part of daily life, be it through social media or through community gardens or similar locally rooted projects. raumlaborberlin, Fountain House, Montreal, Canada On the other hand we tend to take for granted many achievements inherited from previous generations’ common efforts, without giving them a second thought.

One of these heritages are public infrastructures. While international companies secure access to water as part of their economic models, in western cities this good is mostly distributed freely. Courses. Interview with Pritzker Prize winner Shigeru Ban.

24 March 2014 | By Jeremy Melvin This year’s Pritzker Prize winner Shigeru Ban is renowned both for his innovative work with paper and deep humanitarian concerns. 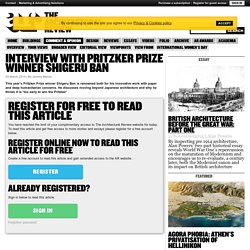 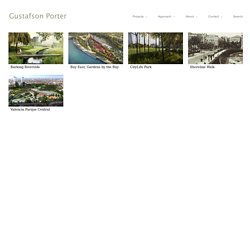 Telling Big Stories from Big Data. Infographics have never been more popular thanks to social media and sites like visual.ly. 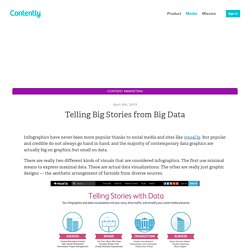 But popular and credible do not always go hand in hand, and the majority of contemporary data graphics are actually big on graphics, but small on data. There are really two different kinds of visuals that are considered infographics. The first use minimal means to express maximal data. These are actual data visualizations. The other are really just graphic designs — the aesthetic arrangement of factoids from diverse sources. El parque Ciénaga de la Virgen. Piet Oudolf - Gardens and Landscapes. Edward Burtynsky PHOTOGRAPHIC PROJECTS. The Clouds Pavilion: An Uninvited Pavilion for the 2014 Venice Biennale. [Please insert GIF header: An uninvited pavilion for the 2014 Venice Biennale Commissioned by Reality Cues // Curated by @Archistophanes and @Antiquides CALL FOR ENTRIES: It’s Venice Biennale time and Reality Cues is getting in the spirit by creating a participatory exhibit in response to Rem Koolhaas’ curatorial theme Fundamentals. 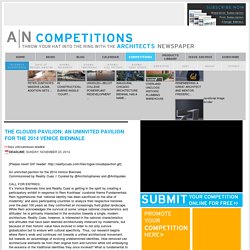 Rem hypothesizes that ‘national identity has been sacrificed on the altar of modernity’ and asks participating countries to analyze their respective histories over the past 100 years as they confronted an increasingly fluid global landscape. While Rem acknowledges the survival of some ‘unique national characteristics and attitudes’ he is primarily interested in the evolution towards a single, modern architecture. Telling Big Stories from Big Data. Information Design Services. Flat Earth Maps. Holcim Africa Middle East. Holcim Awards Gold 2014, Eco-Techno Park: Green building showcase and enterprise hub, Ankara, Turkey. 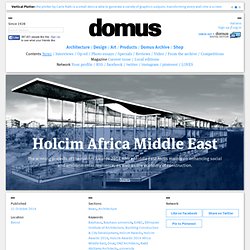 Edward Tufte is a noted proponent of designing data rich visualizations. His books, including the seminal The Visual Display of Quantitative Information have influenced countless designers and engineers. When I first saw Fernanda Viégas and Martin Wattenberg’s Wind map project via Michael Kleber’s Google+ post, I immediately became entranced with it. After studying it for some time, I feel that the designers must have been intimately familiar with Tufte’s work.

Freshkills Park. In 2001, the City of New York, led by the Department of City Planning and supported by the New York Department of State’s Division of Coastal Resources, conducted a master planning process for Freshkills Park that resulted in an illustrative park plan, also known as the Draft Master Plan . In 2006, the Department of Parks & Recreation assumed responsibility for implementing the project using the Draft Master Plan as a conceptual guide. The basic framework of the plan integrates three separate systems — programming, wildlife, and circulation — into one cohesive and dynamic unit.

Kibera Productive Public Space. More information about the organisation A PPS is a community-driven process to reclaim waste spaces along water ways to mitigate environmental hazards, provide amenities and develop micro-enterprises to fund maintenance. Goal 1. Enhance environmental, economic & social understanding of Kibera watercourses and the impacts on the wider Nairobi River Basin amongst communities & local agencies. 2. What is Placemaking? What if we built our communities around places? As both an overarching idea and a hands-on approach for improving a neighborhood, city, or region, Placemaking inspires people to collectively reimagine and reinvent public spaces as the heart of every community. Strengthening the connection between people and the places they share, Placemaking refers to a collaborative process by which we can shape our public realm in order to maximize shared value.

More than just promoting better urban design, Placemaking facilitates creative patterns of use, paying particular attention to the physical, cultural, and social identities that define a place and support its ongoing evolution. With community-based participation at its center, an effective Placemaking process capitalizes on a local community’s assets, inspiration, and potential, and it results in the creation of quality public spaces that contribute to people’s health, happiness, and well being. Sanitation and the City. Basic examples. Losing our Fear! Facing the Anthro-Obscene* It’s useless to wait-for a breakthrough, for the revolution, the nuclear apocalypse or a social movement.

Don't Start a Company with Your Friends  When we're launching a new business, we naturally turn to our friends. They're the people we trust for sharing information and covering our backs. By recent estimates, 40 percent of founding teams include people who were friends socially before building their startups. But according to new research, starting a company with your friends is a risky endeavor. When Harvard Business School professor Noam Wasserman studied nearly 10,000 founders of technology and life sciences startups, the least stable founding teams were friends. Each friendship in a founding team increased the rate of founder turnover by 28.6 percent.