It is not Hans Sloane who has been erased from history, but his slaves. How do you erase a figure from the past and rewrite British history? 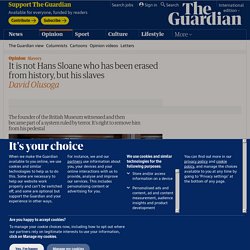 According to some, it is done by taking a bust or statue of the figure in question and carefully placing it inside a climate-controlled glass cabinet that is then put on public display, alongside “artefacts explaining his work” in a free-to-access national museum, in the heart of our capital city. Oddly, this is not the form of “erasure” favoured by al-Qaida and the Taliban, who tend to opt for alternative methods involving sledgehammers and explosives. Perhaps they have been going about things the wrong way. NHM Botany sur Twitter : "A specimen from the #herbarium of Leonard Plukenet (1642-1706) in the #sloaneherbarium - sterile, but beautifully arranged to show both the upper and lower leaf surfaces and cross-referenced to published works.…

Putting nature in a box: Hans Sloane’s ‘Vegetable Substances’ collection. The Sir Hans Sloane Herbarium. Sir Hans Sloane's Correspondence Online. Recently, I found myself doing a little seat dance in the British Library when I came across a fascinating series of letters (Sloane MS 4076) from 1715, written by apothecary William Lilly about the Countess of Suffolk, Henrietta Howard. 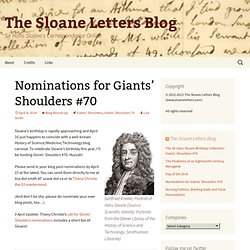 Historians of medicine, of course, are generally loathe to engage in retrodiagnosis, but sometimes it’s just too tempting… What Lilly seemed to be describing was a case of Cotard Delusion! Cotard Delusion, or Walking Corpse Syndrome, was first described as a cluster of symptoms by Jules Cotard in the 1880s. The symptoms include insensitivity to physical pain, a preoccupation with guilt and despair, and the belief that one is already dead, damned or possessed (or, conversely, immortal). Cotard was not the first to observe this sort of case, but he categorised it as a syndrome: hypochrondriac delusion and anxious melancholy, or lypemania—drawing on an earlier classification from Jean-Étienne Dominique Esquirol (1772-1840). 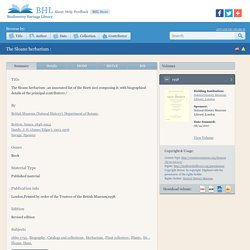 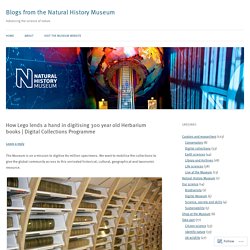 We want to mobilise the collections to give the global community access to this unrivaled historical, cultural, geographical and taxonomic resource. The Sir Hans Sloane Herbarium in the Darwin Centre Cocoon at the Museum in London Carrying out pilot projects helps us to establish bespoke digital capture workflows on areas of the collections. Mercers Trust funded a small scale pilot project to digitise the more difficult to image herbarium specimens from the Samuel Browne Volumes of the Sloane Herbarium that contain specimens of medicinal plants form India.

Dr Steen Dupont from the Museum’s Digital Collection programme has been leading on this project. Sir Hans Sloane: Collector, Marmoset-Owner and Chocolate-Populariser - Medieval manuscripts blog. Sloane specialist guide 128098. Sloane’s Treasures – Workshop 2: Sloane’s ‘Artificial Rareties’ – Breakout 1. Event Date: 31 May 2012 Hartwell Room The British Museum Great Russell Street London WC1B 3DG Sloane’s Treasures – Workshop 2: Sloane’s ‘Artificial Rareties’ Breakout group one: The presenters of the morning presentations will then chair the discussion in their break outs when they can take it further with fellow experts focussing on: A list of desiderata of what you would want the Reconstructing Sloane project to achieve in this area, what you would want it to explore, catalogue etcResearch questions that could be addressed during the work on the collections and the networks and other topics they throw upPossible outcomes and projectsHow can we connect science and culture through exploring this part of his collections (e.g. connections with natural history, medicine, possible scientific research/conservation that can be done) ————————————————————————————— A few words from David Saunders: Conservation and Scientific Perspectives: download 1. 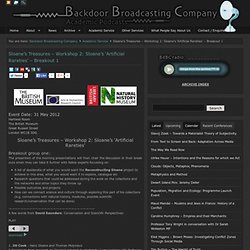 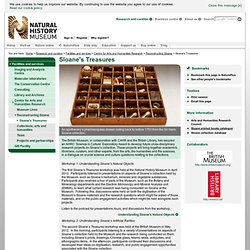 These projects will bring together academics, librarians, curators, and other experts, from the arts, the humanities and the sciences, in a dialogue on crucial science and culture questions relating to the collections. Hans Sloane: physician, collector and botanist. A botany sheet showing a cocoa plant brought back from Jamaica in 1689 by Hans Sloane. 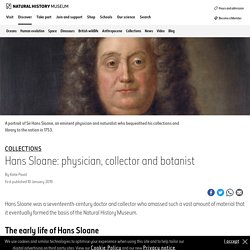 The illustration was completed by Dutch artist Everhardus Kickius. Once back in London, Sloane set up a medical practice. He was a highly esteemed physician and was appointed Physician Extraordinary to Queen Anne and King George I, and Physician in Ordinary to King George II. He married Elizabeth Langley Rose in 1695. She was the widow of Fulke Rose, a plantation owner in Jamaica. Sloane also continued to collect. Links between Sloane's collection and the slave trade did not end when he left Jamaica.

Many of the collections built by other men ultimately ended up with Sloane. His house also became a major attraction.