@Trichocolea @plantbiology @BBSbryology That's very cool! We have papier mache fungi, apples and pears in the Adelaide Botanic Gardens Museum of Economic Botany, made in the second half of the nineteenth century by Heinrich Arnoldi &amp; Co of Gotha, Germ. Some specimens held in academic herbaria originated from personal collections. Here's a fern from 1819, collected by Dr. Dennis Cooley for his collection of ~20k specimens, which Michigan State University received and used to start this Herbarium! 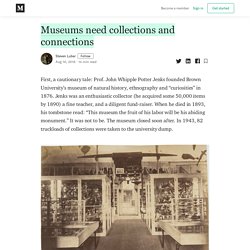 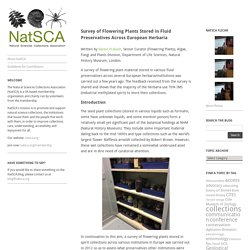 A survey of flowering plant material stored in various fluid preservatives across several European herbaria/institutions was carried out a few years ago. The feedback received from the survey is shared and shows that the majority of the herbaria use 70% IMS (industrial methylated spirit) to store their collections. Introduction. Pollen not to be sneezed at. 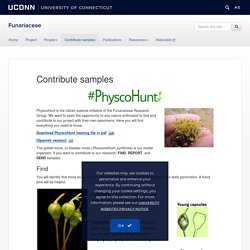 We want to open the opportunity to any nature enthusiast to find and contribute to our project with their own specimens. Here you will find everything you need to know. Download PhyscoHunt training file in pdf.pdf [Spanish version].pdf. Today the latest @Nat_SCA journal is out! Guess who's paper is finally published... @littlegaudy & @NatHistGirl! #NaturalHistory #decolonial #approaches #History #science #SocialJustice #museums… The Carpological Collection: The Linnean Society. Percival Wheat. John Percival (1863-1949) was Professor of Agricultural Botany at The University of Reading from 1907 to 1932 and a driving force behind the creation of agricultural botany as a scientific discipline. 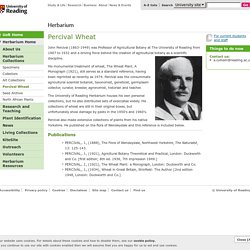 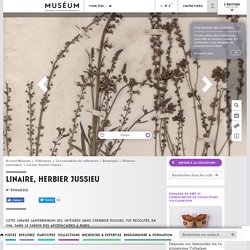 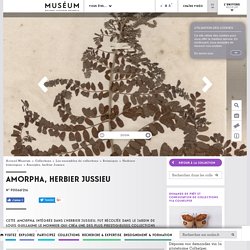 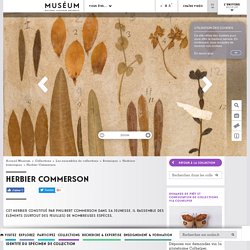 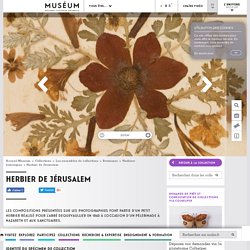 Collections‐based science in the 21st Century - Funk - 2018 - Journal of Systematics and Evolution. ‘Fresh and Fragrant Flowers’: Emory's Herbarium and Shakespeare. Rescuing the ICARDA genebank – Agricultural Biodiversity Weblog. Introducing the herbarium. A herbarium is one of the main tools for research and documentation of plant biodiversity. 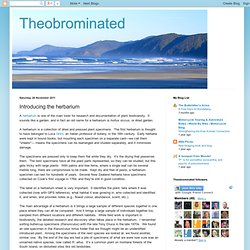 It sounds like a garden, and in fact an old name for a herbarium is hortus siccus, or dried garden. A herbarium is a collection of dried and pressed plant specimens. The first herbarium is thought to have belonged to Luca Ghini, an Italian professor of botany, in the 16th century. Early herbaria were kept in bound books, but mounting each specimen on a separate card—we call them "sheets"— means the specimens can be rearranged and studied separately, and it minimises damage. The specimens are pressed only to keep them flat while they dry. The label on a herbarium sheet is very important. The main advantage of a herbarium is it brings a large sample of different species together in one place where they can all be compared. Preserving “Heirloom” Microbial Collections. Plant molecular pathologist Yulin Jia samples a field in Columbia for rice blast disease. 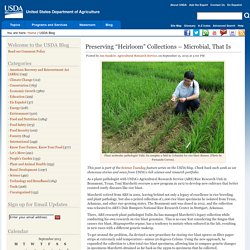 (Photo by Fernando Correa). This post is part of the Science Tuesday feature series on the USDA blog. Map of Martin Gardner herbarium collections. Cabinets. Dillenius: Historia Muscorum. This site publishes data, images and literature from Dillenius' HISTORIA MUSCORUM Johann Dillenius (1684-1747) was born in Darmstadt, Germany and came to England in 1721 with a prodigious botanical reputation, based on his publication Catalogus plantarum sponte circa Gissam nascentium (1719). Under the patronage of William Sherard (1659-1728), Dillenius' reputation increased and, at Sherard's insistence, he eventually became the first Sherardian Professor of Botany in 1734. Fungi of Great Britain and Ireland. We know that there are many species of fungi in the UK (around 15000 at the last count), but for many we have little idea about where they are or even whether they have become extinct. This project will focus on fungi that have been rarely recorded from our region, carrying out targeted surveys to establish whether they are still there, and if so whether they are genuinely rare or merely under-reported.

These abandoned species are currently lost, and hopefully many will be found as a result of project actions. Their conservation will then be promoted in partnership with local specialists and stakeholder groups. The project will run for five years from 1 July 2014 and will be managed by the Royal Botanic Gardens, Kew, funded by a very generous donation from the Esmée Fairbairn Foundation. Plankton collection NHM. Plant models collection now online.

Here, Curator of Botany, Donna Young reveals a fascinating part of our botanical collection, Brendel’s anatomical plant models and how they were used as teaching aides. “Down in the basement of World Museum there is a room with cabinets lining the walls. Inside these cabinets are an amazing collection of large and very colourful plant models. You may have seen some of them displayed in our atrium or in our Clore Natural History Centre. The models are part of the museum’s botanical collection and were made around 1900 in Germany by a firm of Berlin model makers called Brendel. They are constructed from a variety of materials including papier-mâché, wire, wood and glass. These days a flower can be dissected under a microscope and the image can be projected to an entire classroom. Mapping “flourishing” genebanks. The Atlas for the End of the World is a collection of maps and infographics covering two important subjects: the first is the amount of protected area in the world’s biodiversity hotspots and how these regions are tracking in regard to meeting 2020 United Nations (Aichi) protected area targets; the second is an assessment of which cities in these hotspots are growing on collision courses with remnant habitat and endangered species.

Nice idea, of course. And given their first aim, as described above, they didn’t really need to do anything on genebanks or botanic gardens. But they did, and here is the resulting map (click to enlarge). Cornell Plant Anatomy Collection. Finding Federal Scientific Collections Just Got Easier. Scientific collections—collections of physical specimens such as animal and plant specimens and their tissue and DNA, microbes, geological minerals and moonrocks, even air and water samples—are a vital part of the infrastructure for science in the United States and globally. They also play important roles in supporting public health and safety, agriculture, homeland security, trade and economic development, medical research, and environmental monitoring.

Federal departments and agencies own and maintain hundreds of diverse scientific collections, many of which are being used for applications beyond their original use. Many of these collections grow at regular, predictable rates, and all require ongoing maintenance to preserve their value and utility. The registry provides unprecedented access to information about the scientific collections that are owned and operated by Federal departments and agencies.

One of the major elements of Kew’s Science Strategy 2015-2020 is the digitisation of Kew’s diverse collections. Kew’s microscope slide collection is the largest of its kind worldwide, incorporating over 130,000 slides and representing a unique resource for trait analysis and plant authentication. Beaty Treasures - The Moore collection; 1980 - 2005. Botanical Wonders in Warrington from Kew. “Abnormal apples” and “proliferous potatoes” – Uncovering the stories behind Kew’s Museum of Economic Botany Collection. – Biodiversity Heritage Library. Putting Plants on Display - The Plant Press. Wax wonders. Apple Models. With apples, the dead are many Spook yourself with these ghosts Another beautiful Adelaide book by PHILIP WHITE.