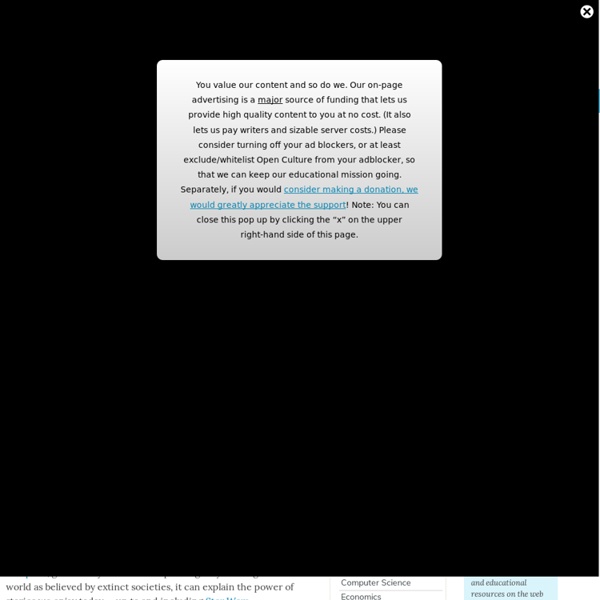 Photo by "Folkstory" features Joseph Campbell (left) with Jonathan Young, via Wikimedia Commons. You may not be interested in politics, they say, but politics is interested in you. The same, if you believe famed mythologist Joseph Campbell, goes for myth: far from explaining only the origin of the world as believed by extinct societies, it can explain the power of stories we enjoy today — up to and including Star Wars. The man behind PBS' well-known series The Power of Myth left behind many words in many formats telling us precisely why, and now you can hear a fair few of them -- 48 hours worth -- for free on this Spotify playlist. (If you don't have Spotify's software already, you can download it free here.) "From the Star Wars trilogy to the Grateful Dead," says the Joseph Campbell Foundation, "Joseph Campbell has had a profound impact on our culture, our beliefs, and the way we view ourselves and the world." Would you like to support the mission of Open Culture? Related Content:

18 Classic Myths Explained with Animation: Pandora’s Box, Sisyphus & More Greek myths have an incredible shelf life. We may not retain all the players’ names or the intricacies of the various plot lines, but the creative punishments the gods—Zeus, in particular—visited upon those who displeased them have provided modern mortals with an enduring shorthand for describing our own woes. Tempted to sneak a peek inside a lover’s diary? DEMONOLOGY —Biblical and Post-Biblical Data: Systematic knowledge concerning demons or evil spirits. Demons (Greek, δαίμονες or δαιμόνια; Hebrew, [Deut. xxxii. 17; Ps. cvi. 37] and

The Singularity is Near-Sighted: Joseph Campbell's Vision for the Internet Age Beams and Struts employs commenting guidelines that we expect all readers to bear in mind when commenting at the site. Please take a moment to read them before posting - Comment Link Tuesday, 13 December 2011 16:36 posted by Jeremy Johnson Hi Andrew, As a fellow student of Campbell and mythology at large, I thoroughly enjoyed this. You're an excellent writer. I was extra-excited to leap to the comment section before even reading this thoroughly, because I've been studying this very subject all semester at grad school. I've read a couple of semi-geeky books and articles about cyborgs, AI, the global brain and Kelly's "technium." It's a strange world of pseudo-mythological themes that creep up in the scientific and technological imagination.

9 Maltese Monsters Straight Out Of Your Nightmares - Lovin Malta Just when you thought it was safe to go outside (or inside, or anywhere really). Malta is a magical place in many ways. Our island is rich in history, surrounded by a beautiful sea and crammed with archeological and architectural gems. But there is a darker side to its allure, which is revealed in ‘The Maltese Bestiary’ by Stephan D. Mifsud. Romance of the Grail – JCF: Works By Joseph Campbell Throughout his life, Joseph Campbell was deeply engaged in the study of the Grail Quests and Arthurian legends of the European Middle Ages. In this new volume of the Collected Works of Joseph Campbell, editor Evans Lansing Smith collects Campbell’s writings and lectures on Arthurian legends, including his never-before-published master’s thesis on Arthurian myth, “A Study of the Dolorous Stroke.” Campbell’s writing captures the incredible stories of such figures as Merlin, Gawain, and Guinevere as well as the larger patterns and meanings revealed in these myths. Merlin’s death and Arthur receiving Excalibur from the Lady of the Lake, for example, are not just vibrant stories but also central to the mythologist’s thinking. The Arthurian myths opened the world of comparative mythology to Campbell, turning his attention to the Near and Far Eastern roots of myth.

7 Storytelling Techniques You Can Learn from Filmmaker & YouTube Star Casey Neistat Finding new ways of making films can be as easy as opening your eyes. For many of us, learning about filmmaking consists of scouring YouTube for helpful tutorials and video essays, reading blogs like this one, or watching the content of our favorite film directors. But there is so much to learn from creators in different mediums, including the vlog. If you've never heard of Casey Neistat, he is not only one of the most popular YouTube vloggers with over 4 million subscribers, he is also a noteworthy filmmaker. And because Neistat creates his vlogs with a keen cinematic mind and unique filmmaking style, his approach is certainly worth studying. Editor Sven Pape breaks down 7 techniques used by Neistat in the video below:

Gilgamesh, Epic of From New World Encyclopedia The Epic of Gilgamesh is an epic poem from Babylonia and arguably the oldest known work of literature. The story includes a series of legends and poems integrated into a longer Akkadian epic about the hero-king Gilgamesh of Uruk (Erech, in the Bible), a ruler of the third millennium B.C.E. Data analysis of four hundred versions of Little Red Riding Hood A computer analysis of the texts of more than 400 Dutch versions of Little Red Riding Hood from the 18th century up to now provides more insight into the evolution of this fairy tale. The computational ethnologist Folgert Karsdorp and the language technologist Antal van den Bosch of Radboud University studied the story and the way in which the various versions form a network with one another. Karsdorp and Van den Bosch show that each new text gradually alters the fairy tale and almost always refers back to its immediate predecessors.

Samhain: Sympathetic Magic – JCF: Home If you peel back the frivolous mask of a holiday that inspires $8.4 billion in candy; decorations; and costumes sales for little kids, grownups looking for a moment of escapist fantasy, and long-suffering pets; you’ll find a swirling memories of much a darker, more magical dancing with ideas of life and death. Since the Iron Age (about 600-800 BC) Celtic cultures have been marking Samhain, the end of the year at the death of summer, and an opening, if only for a day, into the world of the ‘other,’ of long-dead ancestors, lost loved ones, and the energies that sit outside of bright daylight’s logical understanding. Imagine, for a moment, living in a culture when the last harvests, cattle driven down from high summer pastures and slaughtered for winter, mark the end of the abundance of summer, and the cold darkness of winter lies ahead.