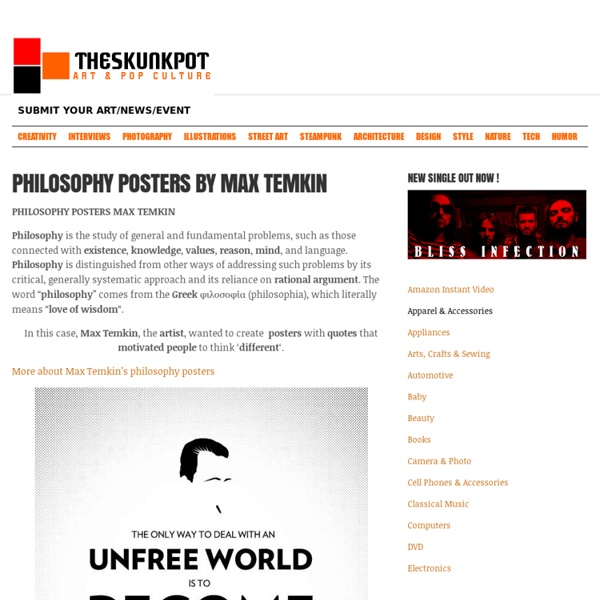 Philosophy is the study of general and fundamental problems, such as those connected with existence, knowledge, values, reason, mind, and language. Philosophy is distinguished from other ways of addressing such problems by its critical, generally systematic approach and its reliance on rational argument. The word “philosophy” comes from the Greek φιλοσοφία (philosophia), which literally means “love of wisdom“. In this case, Max Temkin, the artist, wanted to create posters with quotes that motivated people to think ‘different‘. More about Max Temkin’s philosophy posters Also check out AMAZING SLEEPING BABIES PHOTOGRAPHY and MAPPING STEREOTYPES

About The Internet Encyclopedia of Philosophy (IEP) (ISSN 2161-0002) was founded in 1995 as a non-profit organization to provide open access to detailed, scholarly information on key topics and philosophers in all areas of philosophy. The Encyclopedia receives no funding, and operates through the volunteer work of the editors, authors, volunteers, and technical advisers. At present the IEP is visited over 950,000 times per month.

Philosophical Quotes, Thought-Provoking Sayings Related Quotes Hmmm Philosophy Truth Wise Words We are more often treacherous through weakness than through calculation. ~François VI de la Rochefoucault A man with one watch knows what time it is; a man with two watches is never quite sure. ~Lee Segall Funny monkey experiment Posted on February 7, 2012 in Humor If you’re new here, you may want to subscribe to our RSS feed or follow us on Facebook or Twitter . Thanks for visiting! Drake Quotes, Kid Cudi Quotes, Wiz Khalifa Quotes close Top Matching Results Occasionally Search.com will highlight specialized results that are based on the context of your query.

Vedanta, Advaita Advaita Vedānta is one version of Vedānta. Vedānta is nominally a school of Indian philosophy, although in reality it is a label for any hermeneutics that attempts to provide a consistent interpretation of the philosophy of the Upaniṣads or, more formally, the canonical summary of the Upaniṣads, Bādarāyaņa’s Brahma Sūtra. Advaita is often translated as “non-dualism” though it literally means “non-secondness.” Although Śaṅkara is regarded as the promoter of Advaita Vedānta as a distinct school of Indian philosophy, the origins of this school predate Śaṅkara. Graphing the history of philosophy « Drunks&Lampposts A close up of ancient and medieval philosophy ending at Descartes and Leibniz If you are interested in this data set you might like my latest post where I use it to make book recommendations. This one came about because I was searching for a data set on horror films (don’t ask) and ended up with one describing the links between philosophers. To cut a long story very short I’ve extracted the information in the influenced by section for every philosopher on Wikipedia and used it to construct a network which I’ve then visualised using gephi

10 Reasons We’re Not Adults Yet It’s undeniable that, in one’s twenties, you begin to enter a time in your life where you are clearly no longer a child. But much like the demographic-straddling existential crisis that early 2000s Britney Spears went through, we are no longer quite grown-ups, either. And how do we know? Ben Tour Vancouver-based (close enough) Ben Tour is killing it right now! If you are in the Toronto area, head on over to the Meta Gallery (107-37 Mill St.) – Ben’s Electric Orphans show is up from Jan 9 – Feb 15!

Pastel portraits by Emma Uber With bright pastel strokes, the artist from Australia Emma Uber creates an incredibly expressive portraits of women. 11 Quotes From Alan Watts That Will Change Your Life. Alan Watts is considered as the foremost interpreter of Eastern disciplines for the contemporary West. He had an astonishing and an indescribable way of writing the unwritable. Among all the qualities of this great orator and writer, he had an unique gift of expressing complex thoughts in the form of simple and illustrated thoughts. The simple way he exemplified and expressed all his reflections made him and universal philosopher, someone that could be comprehended by the vast majority of the people. Glossary of philosophy A glossary of philosophy. A[edit] the position that in a particular domain of thought, all statements in that domain are either absolutely true or absolutely false: none is true for some cultures or eras while false for other cultures or eras.