They call it fun, but the digital giants are turning workers into robots. “Secrets are lies; sharing is caring; privacy is theft.” 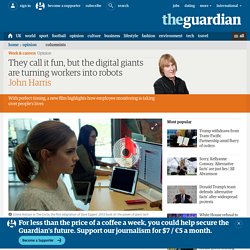 So run the three Orwellian aphorisms at the heart of Dave Eggers’ 2013 novel The Circle, whose film version – starring Emma Watson and Tom Hanks – will arrive in cinemas this spring. Given that the story centres on an omnipotent hybrid of Google, Twitter and Facebook, and asks exacting questions about their shared vision of the future, the timing is perfect – chiming with rising angst about the digital giants’ imperial approach to information, and the sense that their power and recklessness is now having so-called real-world impacts, and huge ones at that. Such, perhaps, is the zeitgeist of early 2017: tech-fear fusing with terror about Donald Trump and Brexit, leaving millions of us in a state of twitchy anxiety.

At the heart of the novel and film is the Circle corporation, whose logo suggests a stylised panopticon, and whose leaders want to shape the world in the image of their Californian HQ. You're Fired: AI Is Coming For Your Job. This Is How AI Will Change Your Work In 2017. Artificial intelligence is growing fast. 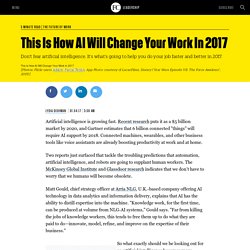 Recent research puts it as a $5 billion market by 2020, and Gartner estimates that 6 billion connected "things" will require AI support by 2018. Connected machines, wearables, and other business tools like voice assistants are already boosting productivity at work and at home. Two reports just surfaced that tackle the troubling predictions that automation, artificial intelligence, and robots are going to supplant human workers. The McKinsey Global Institute and Glassdoor research indicates that we don’t have to worry that we humans will become obsolete. AI and robots threaten to unleash mass unemployment, scientists warn.

By: Clive Cookson in Washington Scientists have warned that rapid strides in the development of artificial intelligence and robotics threatens the prospect of mass unemployment, affecting everyone from drivers to sex workers. 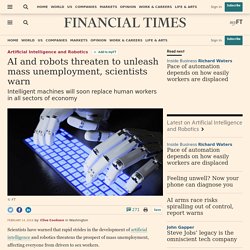 Sample the FT’s top stories for a week. AIGENCY » ABOUT US. Aigency is the world’s first employment agency for artificial intelligence Vision We are amidst a battle for talent. 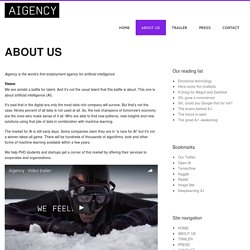 And it’s not the usual talent that this battle is about. This one is about artificial intelligence (AI). It’s said that in the digital era only the most data-rich company will survive. Two reasons computers won't destroy all the jobs. Whether you look at the first Industrial Revolution or the fourth – the 21st century’s own technology-led transformation – automation has always been regarded with trepidation. 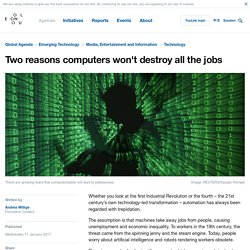 The assumption is that machines take away jobs from people, causing unemployment and economic inequality. To workers in the 19th century, the threat came from the spinning jenny and the steam engine. Today, people worry about artificial intelligence and robots rendering workers obsolete. There is even a body of scientific research which suggests such technology pessimism may be justified; that computers will put at risk a large share of occupations, especially mid-wage roles; and that they will consequently polarize employment between low-end and very highly paid jobs.

The Pros and Cons of Robot Managers. How would you feel working for a robot? 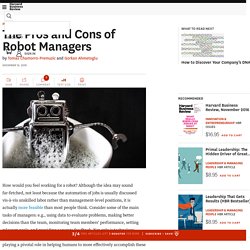 Although the idea may sound far-fetched, not least because the automation of jobs is usually discussed vis-à-vis unskilled labor rather than management-level positions, it is actually more feasible than most people think. Consider some of the main tasks of managers: e.g., using data to evaluate problems, making better decisions than the team, monitoring team members’ performance, setting relevant goals, and providing accurate feedback. Not only is technology capable of rivaling humans on these core management tasks, it is already playing a pivotal role in helping humans to more effectively accomplish these tasks.

Japanese company replaces office workers with artificial intelligence. A future in which human workers are replaced by machines is about to become a reality at an insurance firm in Japan, where more than 30 employees are being laid off and replaced with an artificial intelligence system that can calculate payouts to policyholders. 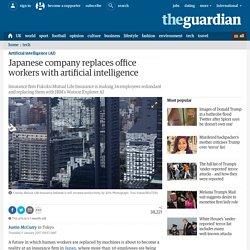 Fukoku Mutual Life Insurance believes it will increase productivity by 30% and see a return on its investment in less than two years. The firm said it would save about 140m yen (£1m) a year after the 200m yen (£1.4m) AI system is installed this month. Maintaining it will cost about 15m yen (£100k) a year. The move is unlikely to be welcomed, however, by 34 employees who will be made redundant by the end of March. Meet the brains at Uber, Spotify and Microsoft changing the world. CRM sucks, but voice, messaging, AI, and $15 million could make it better. Every company loves CRM. 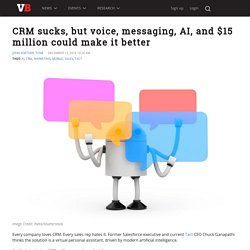 Every sales rep hates it. Former Salesforce executive and current Tact CEO Chuck Ganapathi thinks the solution is a virtual personal assistant, driven by modern artificial intelligence. And he’s just raised $15 million more to make it happen. Modern customer relationship management is essential to tracking and managing a company’s revenue. The problem is that it relies on manually inputting endless reams of data, and salespeople tend to hate the digital equivalent of paperwork.

The Future of Work: It’s Already Here… And Not As Scary As You Think – Josh Bersin. I recently had the opportunity to speak at the Singularity University Summit in San Francisco on The Future of Work. 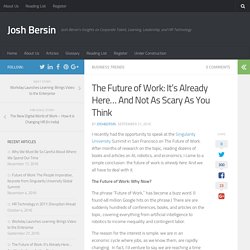 After months of research on the topic, reading dozens of books and articles on AI, robotics, and economics, I came to a simple conclusion: the future of work is already here. And we all have to deal with it.