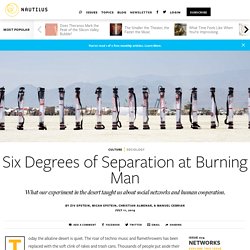 The roar of techno music and flamethrowers has been replaced with the soft clink of rakes and trash cans. Thousands of people put aside their hangovers to methodically clean the desert. After a dedicated communal cleaning, Burning Man, one of the largest arts events in the world, spanning seven days and involving over 70,000 participants, leaves not a single wrapper on the desert. Among the swarm of salt-crusted denizens of this ephemeral city (known as Burners) is us: a scientist who studies cooperation, an industrial designer, and a Silicon Valley security CEO.

Marketing Blue Belt: From Data Zero To Marketing Hero. Marketing White Belt: Basics For The Digital Marketer. How to Create a Social Media Policy for Your Employees : Social Media Examiner. Want to help your employees better engage on social media? 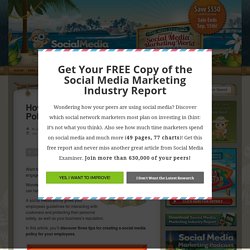 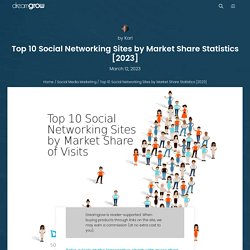 Q&A site Quora is now on the list for some time now and it stalled losing a little ground from its peak of 0.76%. Quora, is a perfect match for this list but it wasn’t even around when we first started publishing this list as it was founded in June 2009. Quora is in the tenth position with 0.74% market share of visits. Facebook Although, Facebook monthly active user count breaks new highs globally it has lost market share for several years in US. News Use Across Social Media Platforms 2017. As of August 2017, two-thirds (67%) of Americans report that they get at least some of their news on social media – with two-in-ten doing so often, according to a new survey from Pew Research Center. 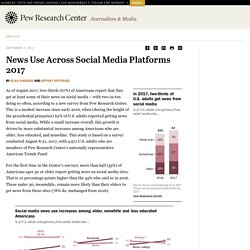 This is a modest increase since early 2016, when (during the height of the presidential primaries) 62% of U.S. adults reported getting news from social media. While a small increase overall, this growth is driven by more substantial increases among Americans who are older, less educated, and nonwhite. This study is based on a survey conducted August 8-21, 2017, with 4,971 U.S. adults who are members of Pew Research Center’s nationally representative American Trends Panel. For the first time in the Center’s surveys, more than half (55%) of Americans ages 50 or older report getting news on social media sites. That is 10 percentage points higher than the 45% who said so in 2016. What happens online in 60 seconds? Our '60 seconds' infographic visualises what happens in just one minute on the web. 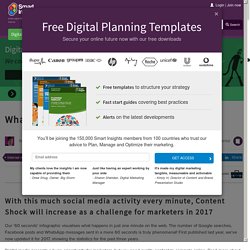 The number of Google searches, Facebook posts and WhatsApp messages sent in a mere 60 seconds is truly phenomenal! First published last year, we've now updated it for 2017, showing the statistics for the past three years. Digital media presents a huge opportunity for marketers, but you need quality content to compete online. Read more about how to manage content marketing to overcome 'content shock' in our free managing Content Marketing in 2016 research report we published with HubSpot. Demographics of Social Media Users and Adoption in the United States. Social media use over timeWho uses social mediaWhich social media platforms are most popularWho uses each social media platformHow often Americans use social media sitesFind out more Today around seven-in-ten Americans use social media to connect with one another, engage with news content, share information and entertain themselves. 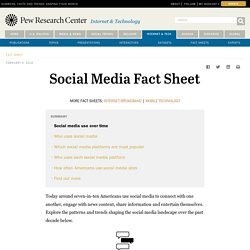 Explore the patterns and trends shaping the social media landscape over the past decade below. The Conversation Prism – (Brian Solis + JESS3) This Is How Your Fear and Outrage Are Being Sold for Profit. One evening in late October 2014, a doctor checked his own pulse and stepped onto a subway car in New York City. 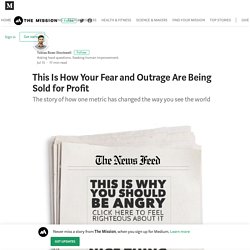 He had just returned home from a brief stint volunteering overseas, and was heading to Brooklyn to meet some friends at a bowling alley. He was looking forward to this break — earlier that day he had gone for a run around the city, grabbed coffee on the High Line, and eaten at a local meatball shop. When he woke up the next day exhausted with a slight fever, he called his employer. Within 24 hours, he would become the most most feared man in New York. Moment data shows that your apps are making you unhappy — Quartz. One thing about whether economic sanctions will work against North Korea: the experts disagree. 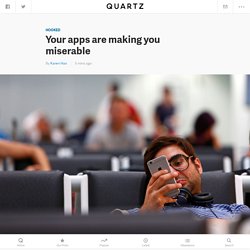 North Korea last Sunday conducted its sixth and most powerful nuclear test, less than a week after sending a ballistic missile over Japan. The regime of Kim Jong-un last month rejected talks, saying it would never give up its nuclear weapons, which it sees as essential to its survival. That followed US secretary of state Rex Tillerson saying negotiations were possible, but only if Pyongyang abandons its pursuit of nuclear weapons. Instagram tips: Perfect doesn't work anymore, say the company's fashion gurus — Quartz. Work means everything to us Americans. 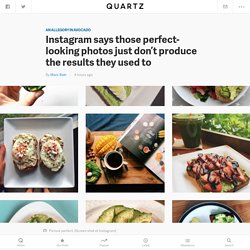 For centuries—since, say, 1650—we’ve believed that it builds character (punctuality, initiative, honesty, self-discipline, and so forth). We’ve also believed that the market in labor, where we go to find work, has been relatively efficient in allocating opportunities and incomes. And we’ve believed that, even if it sucks, a job gives meaning, purpose, and structure to our everyday lives—at any rate, we’re pretty sure that it gets us out of bed, pays the bills, makes us feel responsible, and keeps us away from daytime TV. 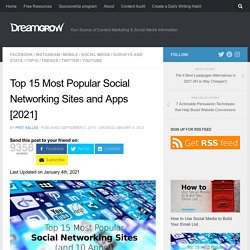 As you can see Facebook is leading the pack with a huge margin in front of Youtube. Thoughts from Groucho, or Re-Marx on Staying Relevant for 100 Years. “I don’t know what you have to say, It makes no diff’rence anyway; Whatever it is, I’m against it!” — Groucho Marx in Horse Feathers To fans of classic comedy, the idea that Groucho Marx is all but forgotten is startling. One of the most popular comedians of the 20th century, he was the quick-witted and sharp-tongued ringleader of the golden age comedy team The Marx Brothers. The Real Trouble With Trump's 'Dark Post' Facebook Ads. “Despacito” on YouTube was played billions of times—but hardly made any money — Quartz. In 1959, the design world became briefly obsessed with a living room in a tiny town in Columbus, Indiana. A lavish 20-page feature in the February issue of House & Garden magazine showcased the impeccable home of Xenia and J. Guy Kawasaki earn the right to promote 32:55.

Posts about news integrity initiative. Storyful and Moat — together with CUNY and our new News Integrity Initiative*— have announced a collaboration to help advertisers and platforms avoid associating with and supporting so-called fake news. This, I hope, is a first, small step toward fueling a flight to quality in news and media. Add to this: A momentous announcement by Ben Gomes, Google’s VP of engineering for Search, that its algorithms will now favor “quality,” “authority,” and “the most reliable sources” — more on that below.The consumer revolts led online by Sleeping Giants and #grabyourwallet’s Shannon Coulter that kicked Bill O’Reilly off the air and are cutting off the advertising air supply to Breitbart.The advertiser revolt led by The Guardian, the BBC, and ad agency Havas against offensive content on YouTube, getting Google to quickly respond.

The incredible amount of action that takes place on the internet every 60 seconds. It’s a wonder anybody gets any work done at all. Avoid magic for magicians, marketing for marketers - Christopher S. Penn Marketing Blog. One of my favorite authors in the world of magic is Darwin Ortiz. In his landmark book Strong Magic, he talks about what makes good magic vs. bad magic, and one of the strongest criticisms is magic for magicians versus magic for laiety. In short, magic has a purpose. When you choose to become a magician, you’re generally pursuing a path entertaining people. Along that path, you pick up lots of tricks, lots of methods, and lots of inside terminology.

Marketing and Sales pros who know this powerful stat, fly; and those who don't, die. By now you've heard all about the white-hot account-based marketing and account-based selling theories; but, astonishingly, there's been a technological shift that's being ignored, and it's affecting your emails. The body of each email you send is previewed in mobile devices. People quickly scan that preview and make a snap decision to either delete your email along with the rest of the unwanted multitudes, or take the time to engage with it.

We know that an increasing number of personal and business email readers access their mail accounts on their mobile phones: The stats range from 40% to upwards of 70%, depending on the survey. We also know most people don't change default settings on their iPhone or Android mobile device, which means we have a pretty good idea of how the email message is being displayed: There's the sender's name, title, and a snippet of the start of the email, right? 15 Proven Methods for Increasing Organic Traffic in 2017. Many business owners understand both the benefits of SEO and the sheer potential for transforming organic visitors into long-term paying customers. 2017 Podcast Market: Demographic and Listening Trends. One in four Americans has listened to at least one podcast in the past month, according to recent research from Edison Research and Triton Digital.

The report was based on data from a telephone survey of 2,000 people age 12 and older in the United States. Social Media - Social Media Use by Generation [Infographic] : MarketingProfs Article. There will be 2.67 billion social media users worldwide by 2018, according to estimated cited in an infographic by Personal Money Service. Social Media Is the New Television – Adweek. Year over year, marketers are finding that television events that previously saw high viewership are grossing lower ratings than ever. This is how Google will collapse – Startup Grind – Medium. Google made almost all its money from ads. The Priceonomics Data Studio. The Platform Press: How Silicon Valley reengineered journalism. The influence of social media platforms and technology companies is having a greater effect on American journalism than even the shift from print to digital.