New research on same-sex households reveals kids do best with mom and dad. February 27, 2015 (ThePublicDiscourse.com) -- A new study published in the February 2015 issue of the British Journal of Education, Society, and Behavioural Science appears to be the largest yet on the matter of same-sex households and children’s emotional outcomes. 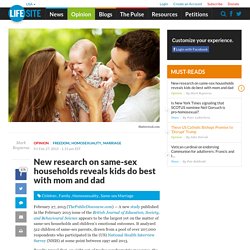 It analyzed 512 children of same-sex parents, drawn from a pool of over 207,000 respondents who participated in the (US) National Health Interview Survey (NHIS) at some point between 1997 and 2013. Results reveal that, on eight out of twelve psychometric measures, the risk of clinical emotional problems, developmental problems, or use of mental health treatment services is nearly double among those with same-sex parents when contrasted with children of opposite-sex parents. The estimate of serious child emotional problems in children with same-sex parents is 17 percent, compared with 7 percent among opposite-sex parents, after adjusting for age, race, gender, and parent’s education and income.

To whom do children belong? How same-sex marriage threatens parental rights. October 16, 2015 (OperationRescue) -- David Daleiden is the Director of the Center for Medical Progress, an organization that was known only to a handful of people prior to July 14, 2015, when he released the first of 10 summary videos that were part of his jaw-dropping 30-month undercover investigation into Planned Parenthood’s participation in the illegal sale of aborted baby body parts that has dramatically changed the abortion debate in America. 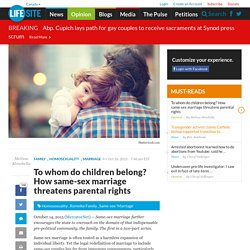 Recently, David was interviewed on camera by The Blaze’s Glenn Beck, who posted a fascinating clip from that interview. In that clip, Beck asks David about whether he ever realized the powerful evil that with which he had embedded himself. “At some point, you guys had to have walked out of those [meetings] just shaking and thinking, A: ‘I can’t believe the evil I just faced,’ and B: 'people die for stuff like this. I mean, we’re going up against evil, and very powerful evil.' Did that ever hit you while you were doing these things?” 'The Kids Are Not All Right,' Daughters of Lesbians Tell Supreme Court. The Supreme Court heard cases yesterday that could determine if same-sex marriage becomes the law of the land. 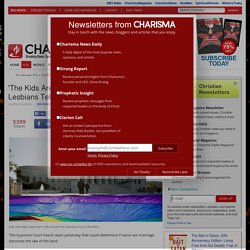 One key part of the debate centers on whether sanctioning gay marriage is fair to the children who would then be raised by same-sex couples. I grew up with two moms: here’s the uncomfortable truth that nobody wants to hear. Also read: Not all children raised by gay parents support gay marriage: I should know, I’m one of them (thePublicDiscourse.com) - Between 1973 and 1990, when my beloved mother passed away, she and her female romantic partner raised me. 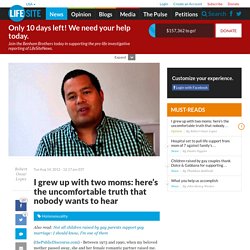 They had separate houses but spent nearly all their weekends together, with me, in a trailer tucked discreetly in an RV park 50 minutes away from the town where we lived. As the youngest of my mother’s biological children, I was the only child who experienced childhood without my father being around. After my mother’s partner’s children had left for college, she moved into our house in town.

I lived with both of them for the brief time before my mother died at the age of 53. Dolce & Gabbana: “The only family is the traditional one” In an interview with Panorama magazine, Domenico Dolce and Stefano Gabbana, the two men whose business partnership—and one-time romantic partnership—lies behind one of the world's great fashion powerhouses, have declared that “The only family is the traditional one.” 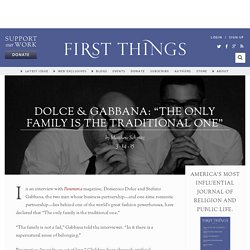 “The family is not a fad,” Gabbana told the interviewer. “In it there is a supernatural sense of belonging.” Procreation “must be an act of love.” Children born through artificial insemination or egg donors are “children of chemistry, synthetic children. Uteruses for rent, semen chosen from a catalog,” Dolce said. “The only family is the traditional one. Domenico and Stefano were for years perhaps the globe's most prominent gay power couple. Unlike the Guccis, Pradas, Puccis, Zegnas, Ferragamos, and Fendis, Dolce and Gabbana do not come from families with long pedigrees in the production and sale of luxury goods. . . . Dear Dolce & Gabbana- a letter of support from children of gays and lesbians. I guess they got our letter. 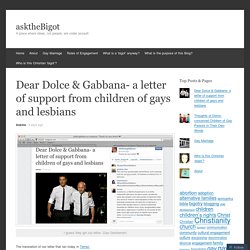 Ciao Gentlemen! The translation of our letter that ran today in Tempi: Dear Dolce and Gabbana,Greetings from the United States. The six signers of this letter were all raised by gay and lesbian parents. She Was Raised by Lesbian Mothers. But This Woman’s Open Letter Reveals Why She Now Opposes Gay Marriage. US National Longitudinal Lesbian Family Study: Psychological Adjustment of 17-Year-Old Adolescents. Same sex adoption is not a game.

Allowing same sex couples to adopt children deprives them of a mother or a father and subjects them to a dangerous social experiment. 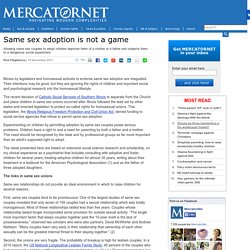 Moves by legislators and homosexual activists to endorse same sex adoption are misguided. Their intentions may be good, but they are ignoring the rights of children and important social and psychological research into the homosexual lifestyle. The recent decision of Catholic Social Services of Southern Illinois to separate from the Church and place children in same sex unions occurred after Illinois followed the lead set by other states and enacted legislation to protect so-called rights for homosexual unions. This legislation, the Illinois Religious Freedom Protection and Civil Union Act, denied funding to social service agencies that refuse to permit same sex adoption.

Www.apa.org/pi/lgbt/resources/parenting-full.pdf. People.virginia.edu/~cjp/articles/ffp10b.pdf. If Your Child Told You 'I'm Gay,' What Would You Do? My Child Says "I'm Gay" - A Suggested Scriptural Strategy 1. 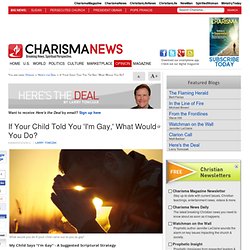 "Pray Continually" (1 Thess. 5:17). From the moment of the initial confession throughout the entire journey, pray and fast in faith the same way you would engage with God for someone's salvation or healing. "With man this is impossible, but with God all things are possible" (Matt.19:26). Reject all fatalism and leanings towards some predestination of your child to this lifestyle. 2. Young people also are usually very uninformed on the serious health risks associated with the not-so-gay lifestyle. 3. 4. 5.

Instead go to the websites of biblically faithful leaders like Dr.