Category:Creativity Techniques. This A to Z of Creativity and Innovation Techniques, provides an introduction to a range of tools and techniques for both idea generation (Creativity) and converting those ideas into reality (Innovation). 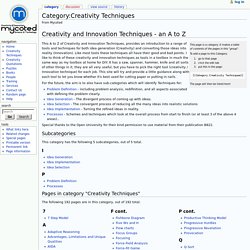 Like most tools these techniques all have their good and bad points. I like to think of these creativity and innovation techniques as tools in a toolbox in much the same way as my toolbox at home for DIY. It has a saw, spanner, hammer, knife and all sorts of other things in it, they are all very useful, but you have to pick the right tool (creativity / Innovation technique) for each job. This site will try and provide a little guidance along with each tool to let you know whether it's best used for cutting paper or putting in nails.

Receptivity to Ideas. Www.bbc.co.uk/science/humanbody/body/interactives/senseschallenge/senses.swf? Visual Brainstorming. Working with Dreams and Images. Keeping a Dream Diary. From Mycoted To experience creative dreaming it is essential to come into better contact with your dreams. 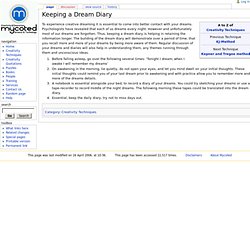 Psychologists have revealed that each of us dreams every night. However and unfortunately most of our dreams are forgotten. Thus, keeping a dream diary is helping in retaining the information longer. The building of the dream diary will demonstrate over a period of time, that you recall more and more of your dreams by being more aware of them. Before falling asleep, go over the following several times: ‘Tonight I dream; when I awake I will remember my dreams’ On awakening in the morning, lie quietly, do not open your eyes, and let you mind dwell on your initial thoughts. Analogies. From Mycoted You use an analogy when you say that something is like something else (in some respects but not in others). 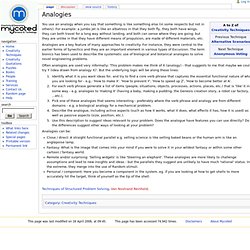 For example: a jumbo jet is like an albatross in that they both fly, they both have wings, they can both travel for a long way without landing, and both can sense where they are going; but they are unlike in that they have different means of propulsion, are made of different materials, etc. Analogies are a key feature of many approaches to creativity.

For instance, they were central to the earlier forms of Synectics and they are an important element in various types of Excursion. The term bionics has been used to describe the systematic use of biological and botanical analogies to solve novel engineering problems. 歡迎來到 Flickr - 相片分享. Boundary Relaxation. From Mycoted The problem boundary is defined here as the imaginary line between what a problem is, must be, should be, or could be, and what it isn’t, mustn’t be, shouldn’t be, or couldn’t be. 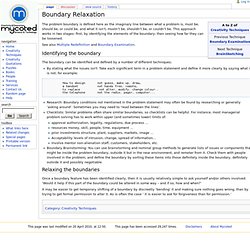 This approach works in two stages: first, by identifying the elements of the boundary; then seeing how far they can be loosened. See also Multiple Redefinition and Boundary Examination. Gap Analysis. From Mycoted Gap analysis is a methodical investigation throughout the whole area of a given technology for ‘gaps’. 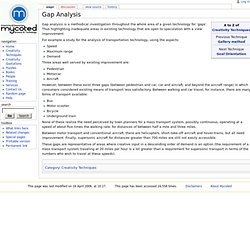 Thus highlighting inadequate areas in existing technology that are open to speculation with a view improvement. For example a study for the analysis of transportation technology, using the aspects: Speed Maximum range Demand. Ideal Final Result. From Mycoted Ideal Final Result (IFR) is an description of the best possible solution for the problem situation (or contradiction), regardless of the resources or constraints of the original problem. 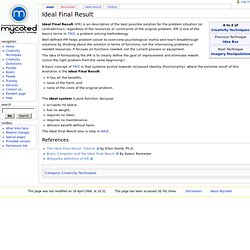 IFR is one of the basics terms in TRIZ, a problem solving methodology. Well defined IFR helps problem solver to overcome psychological inertia and reach breakthrough solutions by thinking about the solution in terms of functions, not the intervening problems or needed resources. It focuses on functions needed, not the current process or equipment. The idea of formulating the IFR is to clearly define the goal of improvement and eliminate rework (solve the right problem from the same beginning!).

A basic concept of TRIZ is that systems evolve towards increased ideality (functionality), where the extreme result of this evolution is the Ideal Final Result: It has all the benefits, none of the harm, and none of the costs of the original problem. Wishing. From Mycoted The Wishing concept literally means imagining a target with thoughts along the lines… ‘I wish I could’… Such thought processes can be used in day to day situation, i.e. 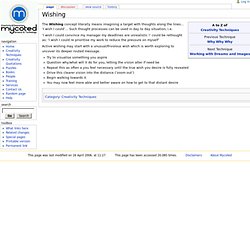 Escape Thinking. From Mycoted by Dr Robert Polster The purpose of this document is to outline a business workshop technique for generating new ideas. 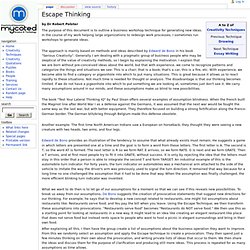 In the course of my work helping large organizations to redesign work processes, I sometimes run workshops to generate ideas. The approach is mainly based on methods and ideas described by Edward de Bono in his book "Serious Creativity". Generally I am dealing with a pragmatic group of business people who may be skeptical of the value of creativity methods, so I begin by explaining the motivation. The book "Test Your Lateral Thinking IQ" by Paul Sloan offers several examples of assumption blindness.

Another example: The first time North American Indians saw a European on horseback, they thought they were seeing a new creature with two heads, two arms, and four legs. Edward de Bono provides an illustration of the tendency to assume that what already exists must remain. Productive Thinking Model. From Mycoted The Productive Thinking Model (sometimes also known as thinkx) was developed by Tim Hurson, a Canadian author, speaker, and creativity theorist. 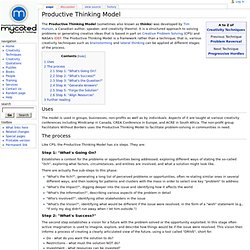 Kepner and Tregoe method. From Mycoted This technique emphasises the ‘rational’ rather than the ‘creative’, it is essentially a method for fault diagnosis and repair rather than for disorganized or systemic problem domains, or those where freshness of vision is essential. 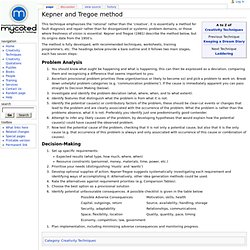 Kepner and Tregoe (1981) describe the method below, but its origins date from the 1950’s. The method is fully developed, with recommended techniques, worksheets, training programme's, etc. The headings below provide a bare outline and it follows two main stages, each has seven steps: Problem Analysis. Backwards Forwards Planning. From Mycoted Backwards forwards planning is a process to help ensure you start your exploration of ideas from the most appropriate place. The process is appropriate to open ended problems; where there is no right or correct answer. Problem Reversal. From Mycoted From What a Great Idea by Charles Thompson.

The world is full of opposites. Of course, any attribute, concept or idea is meaningless without its opposite. Lao-tzu wrote Tao-te Ching which stresses the need for the successful leader to see opposites all around: The wise leader knows how to be creative. The Method State your problem in reverse. Why Why Why. From Mycoted Why? Etc. - repeatable questions. Laddering. From Mycoted Switching to and fro between different levels of abstraction to create ideas is often known as Laddering or the "Why Method. " The sequence below is a ‘ladder’ of concepts in which the items lower down are all members or sub-sets of the ones higher up so that you move between the abstract and the concrete: Define the existing idea to start from: ‘This cup in my hand’. List of paradoxes. What happened in my birth year? 25 Beautifully Illustrated Thought-Provoking Questions.

A question that makes you think is worth asking… At the cusp of a new day, week, month, or year, most of us take a little time to reflect on our lives by looking back over the past and ahead into the future. 29 ways to stay creative by Huub Koch (therealhuubkoch. 70 Reminders to Help You Break Any Barrier. I am pleased to introduce this guest article by a new friend John, the creator of HiLife2B, where he hopes to inspire people and to help them achieve their dreams.

Follow him on Twitter: @janyasor. Inspirational quotes. TreeHugger. Prayer Requests for free - PrayAbout. A Pattern for Prayer. Power of Prayer Free Articles. Different types of prayer. International House of Prayer, a Ministry Growing Into a Movement. Kansas City Christian Church Has Been Praying, Worshipping 24/7 For More Than 12 Years.

There are about 300,000 Protestant churches in America. While each is surely unique, most of them probably have worship services on Sundays (and, perhaps at one or two other mornings or evenings during the week). But, one church — Kansas City, Missouri’s International House of Prayer (IHOP) — has been in an ongoing prayer and worship service 24 hours per day, seven days per week since 1999. Literally. A Christian Thinktank. AlbertMohler.com. John 2 NIV. 40 Best Web Resources for Bible Study.