Woman-in-american-flag-hijab-owns-megyn-kelly. Sorry, were you trying to use a tragic world event as an excuse to say something hateful about Muslims? 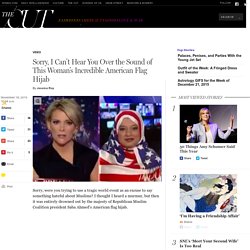 I thought I heard a murmur, but then it was entirely drowned out by the majesty of Republican Muslim Coalition president Saba Ahmed’s American flag hijab. On yesterday’s Kelly File, Trump campaign spokeswoman Katrina Pierson tried to argue that mosques are hotbeds of terrorist activity, and that’s why her boss would consider shutting them down in the wake of the Paris attacks. So Ahmed, blessed with the patience of a million kindergarten teachers, was forced to show Pierson what’s what.

“Megyn, we go to the mosque to pray,” she said. “It’s absolutely horrifying to hear that our constitutional rights of free exercise of religion are going to be challenged just because somebody thinks that there may be some attendees who may disagree with your views. Owned! 6 Women Talk About What Wearing A Hijab Means To Them. Human error led to deadly U.S. strike on Afghan hospital -military. Analysis: Obama embraced redefinition of 'civilian' in drone wars - The Bureau of Investigative Journalism.

President Obama with his Defense Secretary and Chairman of the Joint Chiefs of Staff Two US reports published today provide significant insights into President Obama’s personal and controversial role in the escalating covert US drone war in Pakistan, Yemen and Somalia. 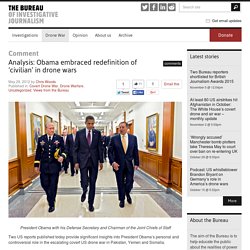 In a major extract from Daniel Klaidman’s forthcoming book Kill Or Capture, the author reveals extensive details of how secret US drone strikes have evolved under Obama – and how the president knew of civilian casualties from his earliest days in office. The New York Times has also published a key investigation exploring how the Obama Administration runs its secret ‘Kill List’ – the names of those chosen for execution by CIA and Pentagon drones outside the conventional battlefield. The Times’ report also reveals that President Obama personally endorsed a redefining of the term ‘civilian’, which has helped to limit any public controversy over ‘non-combatant’ deaths.

If I were Catholic, I’d have to go to confession.’ Mr. Strike on "Jihadi John" unfolded quickly, but hunt took months. WASHINGTON - The U.S. 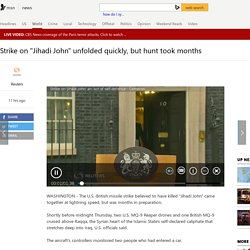 -British missile strike believed to have killed "Jihadi John" came together at lightning speed, but was months in preparation. Shortly before midnight Thursday, two U.S. MQ-9 Reaper drones and one British MQ-9 cruised above Raqqa, the Syrian heart of the Islamic State's self-declared caliphate that stretches deep into Iraq, U.S. officials said. The aircraft's controllers monitored two people who had entered a car. One, they were certain, was Mohammed Emwazi, the British computer programming graduate who catapulted to infamy in August 2014 when he presented the beheading of American journalist James Foley, the first of several grisly videos in which he presided over the beheadings of foreign hostages.

Brandishing a knife, dressed head to toe in black, and speaking with a London accent, Emwazi became known as "Jihadi John", the most potent symbol of the group's brutality and a high-value target for U.S. and British intelligence agencies. Strike on "Jihadi John" unfolded quickly, but hunt took months. ISIS, Syria and War. Is War Over? — A Paradox Explained. David Rothkopf: How fear drives American politics. ISIS Is Training 5-Year-Olds To Fight And Kill. U.S.’s Billions Fail to Sustain Foreign Forces. Photo WASHINGTON — With alarming frequency in recent years, thousands of American-trained security forces in the Middle East, North Africa and South Asia have collapsed, stalled or defected, calling into question the effectiveness of the tens of billions of dollars spent by the United States on foreign military training programs, as well as a central tenet of the Obama administration’s approach to combating insurgencies. 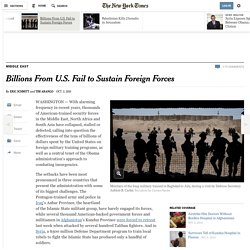 The setbacks have been most pronounced in three countries that present the administration with some of its biggest challenges. The Pentagon-trained army and police in ’s Anbar Province, the heartland of the Islamic State militant group, have barely engaged its forces, while several thousand American-backed government forces and militiamen in ’s Kunduz Province were forced to retreat last week when attacked by several hundred Taliban fighters. American-trained forces face different problems in each place, some of which are out of the United States’ control. Mr. John E.