Miguel Nicolelis: A monkey that controls a robot with its thoughts. No, really. 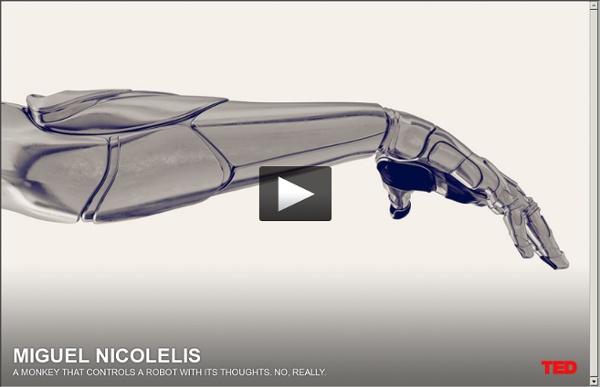 Interview: What's it really like to build your own tiny house and live in it? - Images We cover a lot of tiny houses here at New Atlas, but what's it actually like to build your own and live in it, day to day. Read on as we chat with the creators of the Shedsistence tiny house, Robert and Samantha Garlow, for an insider's take on the pros and cons of embracing the tiny house lifestyle. The Garlows recently completed their Shedsistence tiny house, a towable home on wheels measuring 24 x 8.6 x 13.5 ft (7.3 x 2.6 x 4 m) and weighing in at 9,930 lb (4,504 kg). Inside, there's a total of 204 sq ft (18.9 sq m) of floorspace, though the usable living space is less as they installed an externally-accessed gear room to house all their camping, kayaking, and related outdoors equipment. The pair built Shedsistence themselves on a low budget.

Day 1: Your First Web Page Reactive programming is a way of coding with asynchronous data streams that makes a lot of problems easier to solve. RxJS is a popular library for reactive...Once in a while, it's important for us as developers to go back to what made us excited about computers in the first place. For Derek Jensen, that is gaming....React is a flexible framework that makes it easy to build single-page web applications. One of its tools is a set of lifecycle methods which you can add to...The PixelSquid plugin for Photoshop is an exciting new technology that provides the benefits of 3D elements without having to understand a 3D program or the...How your app looks is as important as how it works, and animation is an important part of modern user interfaces. Whether by changing the color of an element...jQuery UI is an extension of jQuery that makes it easy to create clean user interface elements for your websites.

October 2012 Let's talk about the most amazing organ in the most complex organism on the planet, shall we? :) Here is a basic orientation: Brain Stem The most ancient ("primitive") part of the brain is the brain stem. BMW R1200 R Digimoto Motorcycle Concept In an attempt to bridge the gap between virtual and actual reality, industrial designer Christian Zanzotti, GRAYDEV, and Wunderlich worked together to design and prototype a custom BMW R1200 R in virtual reality. Sounds a bit strange we know, but taking a closer look at the specs of this bike display not only a knowledge of custom bike outfitting but a well-ascribed assumption of where concept development is soon heading. Known as the Digimoto, the concept features a BMW Boxer Engine held within the modified R1200R frame. It sits atop aluminum-milled wheels wrapped within a set of standard racing tires and includes a hand-welded aluminum tank, a laser-cut rubber racing seat, and a Makrolon brake light. The concept also puts sensors and cameras on the motorcycle that record any information around the bike. The accrued data is then translated into rider-legible information, displaying it onto the visor of the paired helmet.

5 Potential Ways MOOCs Will Evolve In order to understand where MOOCs are heading (at least taking a stab at guessing their future), it’s important to know what the stated goals are. In case you’re still new to MOOCs, here’s a helpful rundown of the guiding principles behind MOOCs : Aggregation. Disclosure — ETI The history of Disclosure of extraterrestrial activity on Earth goes back eons, with countless eye-witness accounts of sightings and experiences all over the Earth. The peaceful nonviolent Phoenix Lights event on March 13, 1997 orchestrated by our ETI from the contiguous universe over the state of Arizona in the US, opened up the door even wider to Disclosure. We see there are at least 24 countries which have disclosed and released their former Top Secret files, including recently the United States in a limited capacity.

Coursera Jumps the Shark Remember when Coursera – the world’s largest purveyor of Massively Open Online Courses (MOOCs) – was going to disrupt higher education, and put hundreds if not thousands of public institutions out of business ? I know it’s hard to cast your mind back all of eighteen months, but try. Actually don’t. the front page of the internet When I was between 7 and 10 I used to go to my neighbors house and help her with her garden or house chores simple stuff that kid could do. She told me one day that she really enjoyed me coming over and I was the only friend she had because her family all moved out of state and never called her, everyone she knew passed on and little old ladies don't make friends well. I sat up all night that night and thought about how sad that was, how many years she spent alone until I started "bugging" her (my mom used to tell me to leave the nice old lady alone she probably didn't want me bugging her all the time) I told my mom about it the next day and my mom cooked a big dinner and invited her over and ever since then her and my mom were great friends until she passed away she kinda turned into my moms best friend and I didn't realize it until I was much older but it had to be so nice to have an adult friend you could have adult conversations with and not just a kid to hang out with.

What If We Flipped Online Learning? If you’re an online student, taking an online course (perhaps at Modern Lessons or Khan Academy or Coursera or, well, the list goes on…), or simply looking into putting your lectures online, there’s something you should know. People are already considering what flipped online learning might look like. It’s a thought that’s being passed around some social media circles that I follow and illustrated in the below infographic. In short, flipped online learning would involve a larger focus on the student producing the learning materials and having an online instructor be more of a ‘guide on the side’ as it were. Rather than watching videos and taking a quiz, you’d have a robust discussion, have students create projects to share with classmates, and generate more discussion out of that.

Coodo Modular Living Units Have you ever gone on a long hike or visited a new location and thought to yourself, ‘I wish I could just have my own place right here’. Well, thanks to Coodo’s modular living units, doing just that has gotten a whole lot easier. These pre-fabricated lofts are built to be placed wherever you want, and can be arranged however you see fit. Looking for a vacation home? Or maybe a more permanent abode? The Coodo will fit the bill.

In an effort to make rombotic limbs they made the Monkey Matrix -_- science today is insane. by magicleprechaun Feb 20