This hubble space telescope image represents the largest, most comprehensive "history book" of galaxies in the universethe image, a combination of nearly 7,500 separate hubble exposures, represents 16 years' worth of observationsthe ambitious endeavor, ca. The Fermi Paradox. For thousands of years, we've cast our gaze toward the stars, opining about what awaits us out there. 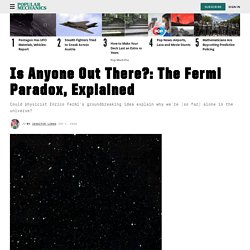 Our telescopes have scanned the skies in search of life, and, in some instances, we thought we'd discovered it. In 1877, astronomer Giovanni Schiaparelli discovered a series of deep trenches carved into the Martian surface. He called them "canali. " His discovery was mistranslated, leading people to believe these that aliens had constructed a series of canals on the Red Planet.

⚠️Spoiler: there are no canal-carving aliens on Mars. There are a lot of galaxies out there in the universe. Child prodidgy-turned-physicist Enrico Fermi invented the atomic reactor, sparked the first controlled nuclear chain reaction, and won the Nobel Prize in Physics in 1938. 100,000 Stars.

40 years and counting: the team behind Voyager’s space odyssey. On a chilly March morning, Steve Howard, aged 65, is at work in his office on the northern edge of Pasadena, California. 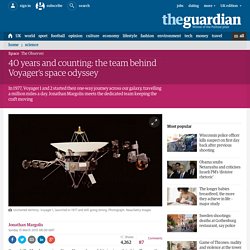 Two computer screens are squeezed on to his corner desk along with family photos, a tissue box and tins of Altoids Curiously Strong Peppermints. The office is in a quiet business park by a workaday main road. Next to it is a McDonald’s, where people linger for hours over a $1 coffee, seemingly to keep warm. Over the road there’s a scruffier burger joint, Jim’s, with an M missing from its sign – and, visible from Howard’s window, a landscaping supplies yard.

If the few people walking by on West Woodbury Road, Altadena, or popping into the landscaping place for some patio paving slabs were to peer into Howard’s office, they might guess, seeing the graph-covered twin screens and a third PC at the other end of the desk, that he was, perhaps, a financial adviser or a day trader. Howard is a Nasa mission controller. Suzy Dodd’s view is more typical of the team’s. If humanity does not somehow destroy life on Earth, the universe's natural selection eventually will. Nasa hosts the Starship Project aiming for interstellar travel within 100 years. It would be hard enough these days to find a human capable of playing a 12-inch LP, let alone an alien. 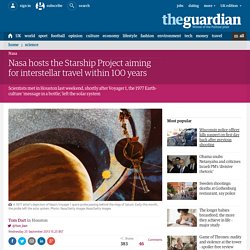 So perhaps it is time for Nasa to update its welcome pack for extraterrestrials. The agency announced earlier this month that its Voyager 1 probe has left the solar system, becoming the first object to enter interstellar space. On board is a gold-plated record from 1977. Project Meshnet. Space Debris Animation- Stuff in Space. Solar System Scope. Spacecraft Software- Quora. Theories on why we haven't been visited by aliens yet? Mission Timeline - OSIRIS-REx Mission. The Touch-And-Go Sample Acquisition Mechanism (TAGSAM) is an elegantly simple sampler head with an articulated arm. 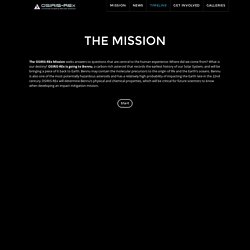 Once the sampler head makes contact with the surface of Bennu, a burst of pure nitrogen gas will push surface regolith into the sampler's chamber. Surface contact pads on the exterior of TAGSAM will also collect fine-grained material as the sample collector touches down on the asteroid. This method was chosen since it eliminates the risks associated with landing on the asteroid. There are three separate bottles of gas, which allow up to three sampling attempts. Although TAGSAM is a new technology, vacuum and micro-g tests of the TAGSAM sampler head have proven its ability to collect more than required 60 grams of sample. The OSIRIS-REx Thermal Emission Spectrometer (OTES) provides mineral and temperature information by collecting infrared (from ~5 to 50 microns) spectral data from Bennu.

More Information: Detailed Specifications and Instrument Operations. (237) Have astronomers discovered an alien megastructure? How Many Moons Does Our Solar System Have? We Ranked Them All. Around 4.5 billion years ago, our solar system was born from a violent cloud of gas and dust. 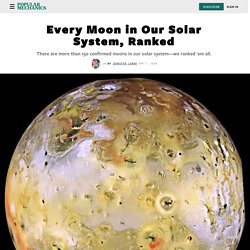 That spinning disk of interstellar material formed comets, asteroids, the planets, and their moons. The first moon we discovered was, of course, our own. Next, the discovery of Io, Europa, Ganymede, and Callisto by Galileo Galilee in the 17th century restructured our understanding of the universe. “That’s the beginning of the scientific era, in my mind,” astronomer David Jewitt of the University of California, Los Angeles tells Popular Mechanics. Over the years, we've constructed powerful telescopes and lofted endeavoring spacecraft toward the stars, cueing a slow trickle of fascinating lunar discoveries.

According to NASA's website, there are 214 moons in the solar system: 158 confirmed moons and 56 provisional moons—ones we suspect may be there or have spotted once but haven't yet confirmed. Prograde: A moon that orbits its object in the same direction as that object's rotation. Kory Kennedy 9.