IoT from the Ground Up: MCU and Connectivity Building Blocks. A hint of things to come in the IoT. By Leslie Langnau, Managing Editor In some respects, the Internet of Things is still heavy on the buzz and promotion and light on actual products that help design engineers. 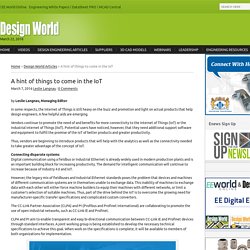 A few helpful aids are emerging. Vendors continue to promote the need of and benefits for more connectivity to the Internet of Things (IoT) or the Industrial Internet of Things (IIoT). Potential users have noticed, however, that they need additional support software and equipment to fulfill the promise of the IoT of better products and greater productivity. Thus, vendors are beginning to introduce products that will help with the analytics as well as the connectivity needed to take greater advantage of the concept of IoT.

Connecting disparate systems Digital communication using a fieldbus or Industrial Ethernet is already widely used in modern production plants and is an important building block for increasing productivity. Other network developers are pursuing a similar course. Research Roadmap Traces the Path to 'Smart' Fire Fighting. When responding to the more than 1.2 million blazes reported annually, the nation's firefighters usually start with a dangerous disadvantage: They often lack critical information -- even something as basic as a floor plan -- that could be vitally important in mounting the most effective and safest attack. 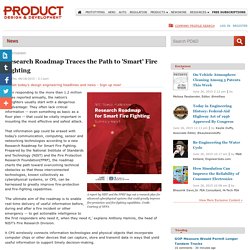 That information gap could be erased with today's communication, computing, sensor and networking technologies according to a new Research Roadmap for Smart Fire Fighting. Prepared by the National Institute of Standards and Technology (NIST) and the Fire Protection Research Foundation(FPRF), the roadmap charts the path toward overcoming technical obstacles so that those interconnected technologies, known collectively as cyberphysical systems, or CPS, can be harnessed to greatly improve fire-protection and fire-fighting capabilities. Examples of current CPS applications are early manifestations of the so-called 'Internet of things.' Smart Home. Intelligent Living.

Building a Software Start-Up Inside GE. Is your company ready to compete in a world of smart, connected products? 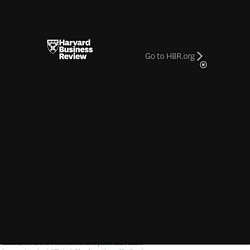 For some time now we’ve been living into a smarter world filled with Big Data and analytics, and a more connected one that’s been described as “the internet of things.” In this world, customers expect their suppliers to surround their products with data services and digitally enhanced experiences. This means that many organizations and their leaders are running as fast as they can to quickly build their software capabilities. How can these companies overcome the inevitable leadership, organizational, and cultural challenges involved? General Electric turns out to be an excellent case in point. Getting Started After Jeff Immelt threw down the gauntlet for building a global software center, GE faced significant physical, organizational, and cultural challenges. 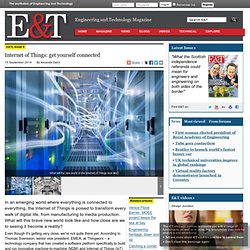 What will this brave new world look like and how close are we to seeing it become a reality? Even though it's getting very close, we're not quite there yet. According to Thomas Svensson, senior vice president, EMEA, at Thingworx – a technology company that has created a software platform specifically to build and run innovative machine-to-machine (M2M) and Internet of Things (IoT) applications – we are on the point of taking intelligence "to a whole new level". But it's not just the technological intelligence that needs to be taken up a level. The thinking and approach of the manufacturing sector needs to be modernised too. Future connectivity The big question is whether this new connected world will mean starting from scratch or working with the machines we already have. Calming Your Biggest Fears About Industrial IoT. Fear of the unknown has fueled a tremendous body of innovative works. 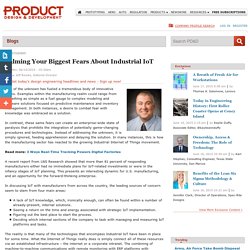 Examples within the manufacturing realm could range from something as simple as a fuel gauge to complex modeling and software solutions focused on predictive maintenance and inventory management. Open Source IoT Platform & Toolkit - Home. EVRYTHNG. The ThingBox Project. Microsoft's Azure Moves into Internet of Things. Microsoft’s Azure cloud platform is expanding into the Internet of Things with the IoT Suite, a convergence and expansion of Azure’s existing offerings. 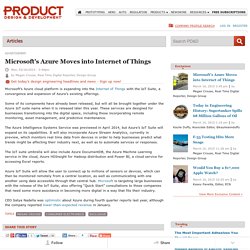 Some of its components have already been released, but will all be brought together under the Azure IoT suite name when it is released later this year. These services are designed for businesses transitioning into the digital space, including those incorporating remote monitoring, asset management, and predictive maintenance. The Azure Intelligence Systems Service was previewed in April 2014, but Azure’s IoT Suite will expand on its capabilities. Opt out of global data surveillance programs like PRISM, XKeyscore, and Tempora - PRISM Break - PRISM Break. 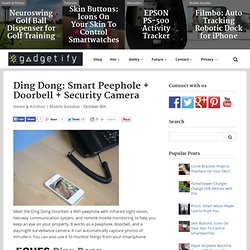 It works as a peephole, doorbell, and a day/night surveillance camera. It can automatically capture photos of intruders. You can also use it to monitor things from your smartphone. The device has anti-tampering design and a wide angle view to capture everything. Wireless electricity products spark a new industry. January 15, 2009 The promise of wireless electricity has been around for over 100 years. 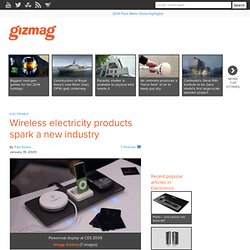 Smart wireless power outlets - Research News August 2012 - Topic 5. Soon there will be no need for special timers to switch lighting on and off or operate household appliances when the homeowner is absent. 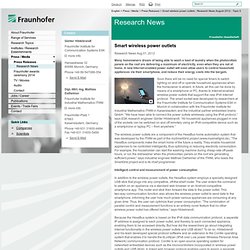 In future, all this can be done by means of a smartphone or PC, thanks to Internet-enabled wireless power outlets that support the new IPv6 Internet protocol. Nest Cam is here, but the 'Internet of Things' still isn't. SAN FRANCISCO — Nest, one of the most recognizable names in home automation, unveiled a welcome refresh of its product line here Wednesday. 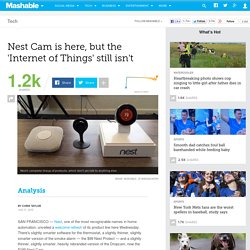