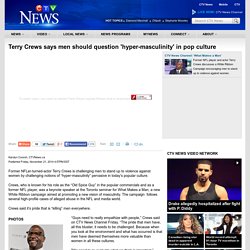 Crews, who is known for his role as the “Old Spice Guy” in the popular commercials and as a former NFL player, was a keynote speaker at the Toronto seminar for What Makes a Man, a new White Ribbon campaign aimed at promoting a new vision of masculinity. The campaign follows several high-profile cases of alleged abuse in the NFL and media world.

Crews said it’s pride that is “killing” men everywhere. “Guys need to really empathize with people,” Crews said on CTV News Channel Friday. “The pride that men have, all this bluster, it needs to be challenged. "We need to re-evaluate what we think is important.” Growing up with a father who physically abused his mother, Crews said he sought out positive male role models in the community and tried to emulate them. Men have never been so preoccupied by their appearance. Alongside the programme of events aimed at women, there are several promotions aimed specifically at men, including a debate hosted by Intelligence Squared to be chaired by Dylan Jones, the editor of GQ, on the subject of male vanity. 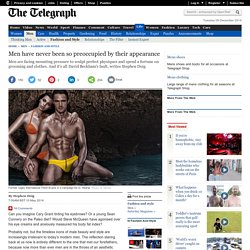 Wilson points to a creeping vogue towards the admiration of male beauty that hasn’t existed with such intensity before. ‘I think it’s a gender issue – as a society it’s become acceptable to admit we like male beauty. When I grew up, men were invisible and women were very visible, now it’s almost the reverse. Staring at a beautiful woman can be regarded as demeaning and undermining to her but staring at a beautiful man enhances his power. It’s about degrees of legitimate objectification.’

David Beckham strips off for H&M Men’s grooming is one of the fastest growing sectors of the British beauty market, with men’s skincare estimated as worth £60 million last year, a rise of 20 per cent in the past five years. 'A crisis of masculinity': men are struggling to cope with life. There is a crisis in modern masculinity, with men struggling to deal with pressures in their personal and professional lives, according to a report by the mental health charity CALM (the Campaign Against Living Miserably). 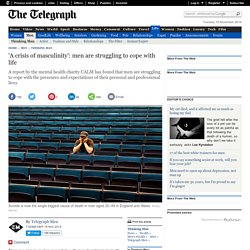 The report, published to coincide with International Men's Day (November 19), seeks to address the reasons why male suicide rates in Britain are at a 15-year high (around 4,500 last year). Suicide is now the single biggest cause of death in men aged 20-49 in England and Wales, with males accounting for 78 per cent of all suicides in the UK. Female suicide rates, in comparison, are declining. The CALM report, A Crisis in Modern Masculinity: Understanding the Causes of Male Suicide, analysed the pressures and expectations that men and women face in their daily lives, and concluded that men are failing to cope, as well as keeping their problems hidden from others.

Men also felt additional pressure to remain strong during times of crisis. The Problem With Masculinity  The other day, I was at the grocery store with my 2-year-old son. 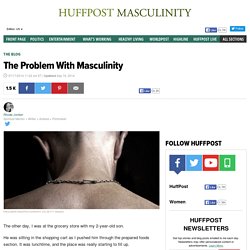 He was sitting in the shopping cart as I pushed him through the prepared foods section. It was lunchtime, and the place was really starting to fill up. As my eyes scanned the steaming hot trays of vegetables, rice, meat and lasagna, a man, late 30s, started walking by. He was also pushing a shopping cart full of groceries.

And there was a little boy, maybe 4, sitting in there, crying softly to himself. Even though the boy was causing no major disturbance (much less a minor one), the father was visibly flustered. “Hey, no crying,” he muttered. But the boy sobbed on, his pink eyes spilling tears. The father let out an exhausted sigh. “Look at that boy over there. I’ve heard this nonsense far too many times. Simple: It’s the delusion that masculinity is king. We’ve short-changed our boys and men by defining masculinity in such a way as to constrict the complex essence of their humanity.

We see it everywhere we look. The New American Man Doesn't Look Like His Father. While life has changed significantly for American men in the past half-century, notions of masculinity remain tied to those that may have been passed down from this father to the son on his shoulders. 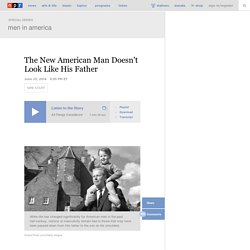