10+ Of The Best “Dog People Vs. Cat People” Tweets - PawwTV. The fight between dog people and cat people is never going to end. 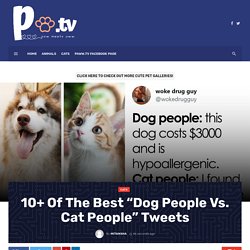 But we all can have a good laugh till the time it goes on. Here are some of the best “dog people vs. cat people” tweets that you surely don’t want to miss. Have a look! Cats and dogs are meant to be loved. While some choose to love either cats or dogs, the others just don’t care. Lose The Cat, Look For The Cat, Find The Cat, His Cat Returns Alone And Now He Has 2 Identical Cats - Fascinating Things. When a pet escapes, moments of tension arise due to the affection we have for it. 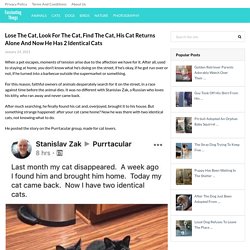 After all, used to staying at home, you don’t know what he’s doing on the street, if he’s okay, if he got run over or not, if he turned into a barbecue outside the supermarket or something. For this reason, faithful owners of animals desperately search for it on the street, in a race against time before the animal dies.

It was no different with Stanislav Zak, a Russian who loves his kitty, who ran away and never came back. (3) Facebook. Adorably Rotund Ginger Invades Iconic Paintings to Turn Them into Cat Art. ‘Mona Lisa' by Leonardo da VinciThis post may contain affiliate links. If you make a purchase, My Modern Met may earn an affiliate commission. Please read our disclosure for more info. Artist Svetlana Petrova finds a creative muse (or “mews”) in her ginger cat, Zarathustra, and the adorable fat feline has made its way into some of the most well-known works of art history.

With crazed cat eyes, a fluffy belly, and a penchant for flowers, the creature seamlessly invades paintings to add his own dose of beauty while giving new meaning to them. In some of the images, he looks like he’s downright crashing the compositions—but in true cat fashion, he couldn’t care less. Spurious Correlations. Woman Instituted Ministry of Silly Walks for Her Neighbors & They Do It.

As the weeks spent in coronavirus quarantine go on, people are finding new (and usual) ways to entertain themselves, whether it’s recreating iconic art or giving a dog a daily makeover. 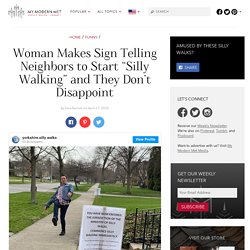 Liz Koto and her family have found another way to make us laugh—with some help from their neighbors. They have deemed the sidewalk in front of their house as the “jurisdiction of the Ministry of Silly Walks” and instructed those who pass by their sign to immediately begin “silly walking.” All of the resulting funny footwork is captured on the family’s doorbell cam. Bored Quarantined Owners Have Started Putting Cats In Cardboard Tanks. What happens when you have lots of free time and need to distract yourself from uncontrollable life events? 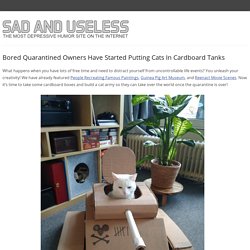 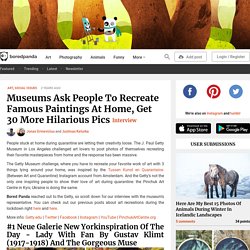 Annelisa Stephan, assistant director for digital content strategy at the Getty, told us that they have “lost count" of all the photos that people have sent them. According to her, the submissions number "many thousands. " Jugando michi con firulais. This Instagram Account Collects Photos Of Cats In Small Shops Looking Like They Own The Place. Quarantined Couple Creates Miniature Art Gallery For Their Gerbils. Everyone faces the current world situation in different ways. 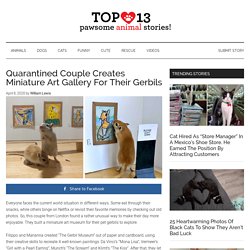 Some eat through their snacks, while others binge on Netflix or revisit their favorite memories by checking out old photos. So, this couple from London found a rather unusual way to make their day more enjoyable. They built a miniature art museum for their pet gerbils to explore. Filippo and Marianna created “The Gerbil Museum” out of paper and cardboard, using their creative skills to recreate 4 well-known paintings: Da Vinci’s “Mona Lisa”, Vermeer’s “Girl with a Pearl Earring”, Munch’s “The Scream” and Klimt’s “The Kiss”.

Everything Homesteading. Dog Balloons That Floated To The Ceiling And Got Stuck. Little know fact: sometimes dogs float to the ceiling and get stuck there. 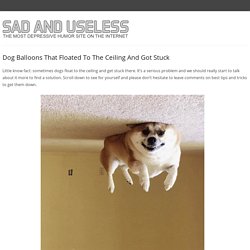 It’s a serious problem and we should really start to talk about it more to find a solution. Animals Eating Strawberries Look Terrifying. Did you know that animals eating strawberries look horrifying? 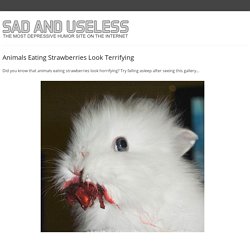 If You Take a Selfie Through a Toilet Roll Tube, You'll Look Like The Moon. Welcome to the internet, the only place you’ll see people taking selfies trough toilet paper roll tube and pretending they’re the Moon… You can join them via #MoonSelfie tag on Instagram. 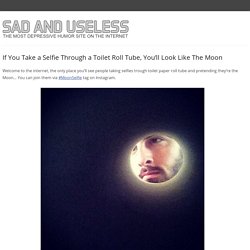 Offensive Teacups To Insult Your Guests With Class. Looking At People Trying To Sell Mirrors Is My New Favorite Thing. Did you know that there is an online community /r/MirrorsForSale that enjoys looking at people who are trying to sell their mirrors? 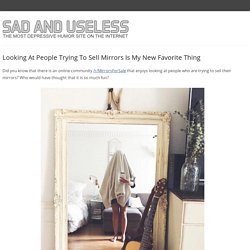 Signs That Humanity Is Getting Dumber. Glitches In The Matrix: Proof That We Actually Live In a Simulation. (1) Facebook. STELLA'S BEST LEAF JUMPS OF ALL TIME. Dave Releases 30 Animal ‘Guides’ And They’re So Ridiculous, They’re Hilarious. The animal kingdom is huge and unless you're my colleague, Justė, who's like a walking encyclopedia (seriously, the woman knows everything, point to a random bug on the ground and she'll tell you all about its ancestors a million years ago), it's impossible to know everything about it. So, to broaden your understanding of the beings we share Earth with, UK TV channel Dave launched an online campaign titled What the bloody hell is a ... ? During it, the channel shared pictures of various animals along with some of their defining characteristics. And yes, the descriptions aren't completely legit.

Well, actually, they're almost pure fiction. Someone Created A Funny Guide On How To Recognize Famous Painters And It's Surprisingly Accurate (19 Pics) Tom Hart - Ooops. I added drums to the drum solo cat. : aww. This floating tent offers you a cool new way to die while camping. Artist Suffering From Anxiety & Depression Illustrates Her Life In Hilarious Comics. The Facts:Psychedelics can be a useful tool in helping people to work through a number of serious challenges like addiction and extreme trauma. (19) Facebook. 30 Best Accidentally Taken Animal Pics By Google Street View. 30 Times Cats Cracked Us Up. NYC Subway Banned Dogs Unless They Fit In a Bag, Dog Owners Did Not Disappoint.

Marguerite Slane. Life on planet earth - Posts. På väg. - Mia Grönkvist-Olsson. Hallo, Kosmos! - Valimised lähenevad. Vali loodus! □□... THE HUMOR TRAIN — 25 Pics That Will Make You Say WTF. 62 Hilarious Advertising Placement Fails. Adorably Rotund Ginger Invades Iconic Paintings to Turn Them into Cat Art. (1) When You Learn To Blow Bubbles. Facebook. □ - Neuroscience News and Research. NEWS — CAT ART SHOW. Every year, Cat Art Show donates a portion of its proceeds to a cat-related organization. Works on view are for sale and a percentage of sales will benefit the Ian Somerhalder Foundation, founded by actors and philanthropists Ian Somerhalder and Nikki Reed to empower, educate and collaborate with people and projects to positively impact the planet and its creatures.

How To Irritate Europeans In Just One Sentence. Disturbing Bookclub. 23 Irresistibly Weird Books You Won't Believe Actually Exist. 20 of the Sweetest Comics That ”The Simpsons" Artist Draws After Work. Collectable Hieronymus Bosch figurines. Human Tells His Dog He Got a New Pet From The Pet Store. The Dog Proceeds To Throw a Hysterical Fit. 15 Cats Refusing To Accept That They Are Too Big For Their Boxes. #11 – Hilarious! Animated GIF. George Takei - Photos du journal. S. Saint. Classical sculptures dressed as hipsters look contemporary and totally badass. 20 Real Hilarious and Clever Notes From Children - This is Our Future. Jak odśnieżyć chodnik aby wkurzyć sąsiadów...? These Books Actually Exist. Facebook. Siliconvalleyjobtitlegenerator.tumblr.com. Journal Accepts Paper Reading “Get Me Off Your Fucking Mailing List”