Who were the Neanderthals? Artist Brings Historial People Back to “Life” with Hyperrealistic Sculptures. Huarmey Queen From early neanderthals to modern day humans, we have come a long way from the dawn of civilization. 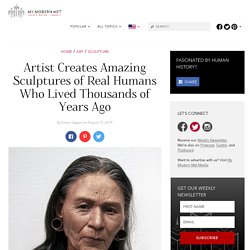 People have not only developed emotionally and intellectually, but our facial structures have also changed over time. When you look in the mirror, the face you see is the result of millions of years of evolution. This is what inspired Swedish sculptor and archaeologist Oscar Nilsson to hand-sculpt a series of faces using excavated bones as a reference. The reconstruction sculptures depict people throughout history, and give us fascinating insight into how those people looked at the time. Using a combination of scientific research and artistic skill, Nilsson based each sculpture on real bone remains he found during archaeological excavations.

In one piece, Nilsson recreated the bust of a young Greek girl who lived 9,000 years ago, during the Mesolithic era (around 7,000 BCE). Adelasius Elbachus, VIII century AD Estrid Sigfastsdotter, XI century AD British man from the Saxon era. Archaeologist Shows How The People Who Lived Thousands Of Years Before Us Really Looked And The Result Is Amazing. The skill of some forensic artists, professionals who are dedicated to the Facial reconstruction of the deceased, is awe-inspiring. 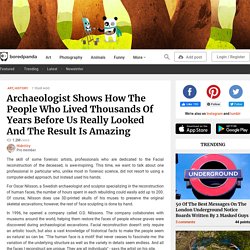 This time, we want to talk about one professional in particular who, unlike most in forensic science, did not resort to using a computer-aided approach, but instead used his hands. For Oscar Nilsson, a Swedish archaeologist and sculptor specializing in the reconstruction of human faces, the number of hours spent in each rebuilding could easily add up to 200. Of course, Nilsson does use 3D-printed skulls of his muses to preserve the original skeletal excavations; however, the rest of face sculpting is done by hand. In 1996, he opened a company called O.D. Archaeologist Shows How The People Who Lived Thousands Of Years Before Us Really Looked And The Result Is Amazing. Stunning 3D sculptures reveal faces of a 'Peruvian Queen', the founder of Stockholm and a woman with a NAIL driven through her skull. FACES of long-dead humans have been reconstructed and revealed by a genius sculptor from Sweden. 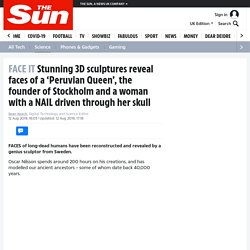 Oscar Nilsson spends around 200 hours on his creations, and has modelled our ancient ancestors – some of whom date back 40,000 years. First, Nilsson creates digital scans of skulls uncovered by archaeologists. This precisely maps every minute detail of the skull so that they can be reproduced later. Next, Nilsson uses a hi-tech 3D printer to rebuild the skull perfectly, which then acts as a base for the sculpture. Using his extensive knowledge of anatomy, Nilsson lays on muscles and skin to reproduce what a deceased person would've looked like. He can then add the final human touches like hair and eye colour, as well as clothing.

His world-famous works include a stunning recreation of the Patcham Woman, who lived around 210AD – during the Roman rule of Britain. Her body was 5-foot and two inches tall, and she was potentially aged just 25 when she was died. Revealed Want to live FOREVER? Blue Eyes Originated from a Single Ancestor Thousands of Years Ago. Get the latest from The Mind Unleashed in your inbox. 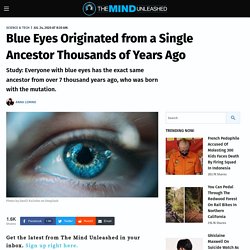 Sign up right here. We so often take for granted the color of our eyes. Whether our eyes are brown, blue or green, we see this as a cosmetic difference and nothing more. We just assume that those with blue eyes have always been around and populated the world as densely as those with other eye colors. Basically, we just take it for granted. It may surprise you to know that the human race all started out with the same eye color, brown. Stoned Ape Theory: Could Magic Mushrooms Be Responsible For Human Evolution? By John Vibes / Truth Theory There are many mysteries about human evolution, and many questions about how we became the thinking species that we are today. 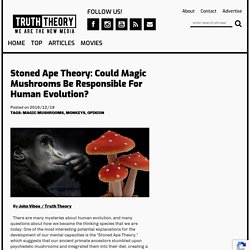 One of the most interesting potential explanations for the development of our mental capacities is the “Stoned Ape Theory,” which suggests that our ancient primate ancestors stumbled upon psychedelic mushrooms and integrated them into their diet, creating a massive jump in the evolution of the brain. Scientists and anthropologists tend to agree that the brain size of our hominid ancestors rapidly doubled sometime in our distant past, but they disagree about exactly when this could have happened. Other researchers suggest that there were multiple periods of rapid brain growth in the history of our species. The theory was first proposed by Terrence McKenna and his brother Dennis, who were pioneers of the counter-culture, and the once-anonymous authors of the first manual for at-home mushroom cultivation. By John Vibes / Truth Theory.