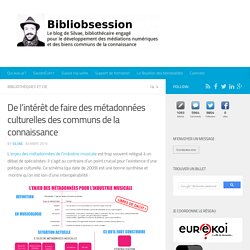 Presentation: Mobile ate the world. Is Der Spiegel’s leaked Innovation Report one of the key documents of this (German) media age? An eminent legacy news organization’s innovation report has leaked! 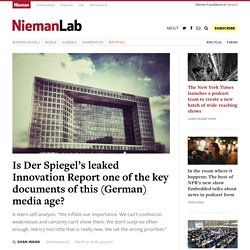 No, we’re not back in May 2014, when The New York Times’ Innovation Report first leaked to BuzzFeed. (Our analysis of it remains, by some distance, the most read Nieman Lab story of all time.) The Upside to Technology? It’s Personal. Photo As a longtime tech columnist, I’ve seen the dark side of technology. 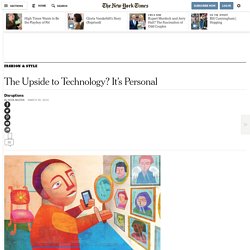 I’ve written about the privacy minefields of Facebook and other social networks. I’ve looked at the hate and bullying that people inflict on Twitter. Clippy’s Back: The Future of Microsoft Is Chatbots. CEO Satya Nadella bets big on artificial intelligence that will be fast, smart, friendly, helpful, and (fingers crossed) not at all racist. 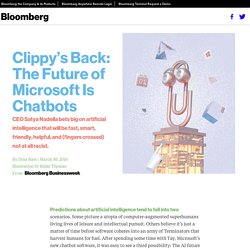 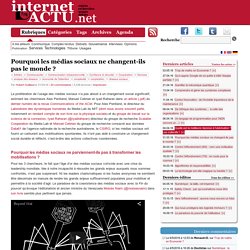 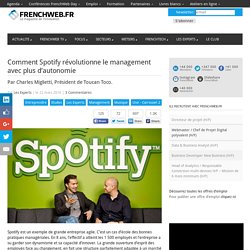 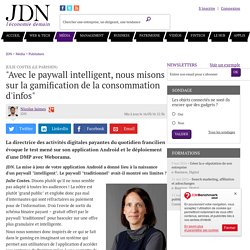 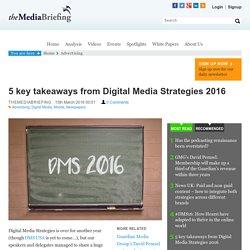 BuzzFeed Launches New Ad Format to Further Monetize Its Big Social Reach. BuzzFeed's made a name for itself with a cross-platform distribution model that relies heavily on publishing to social platforms. 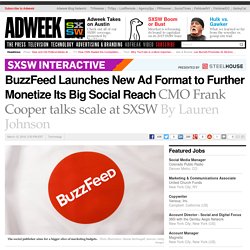 Now, it's looking to leverage that reach for more brand dollars. During a keynote at South by Southwest Interactive, BuzzFeed's marketing chief Frank Cooper unveiled a beta test of an ad format dubbed Swarm. It allows advertisers to run campaigns simultaneously across all of his company's Web and mobile properties and six of its social platforms: Snapchat Discover, Vine, YouTube, Facebook, Instagram and Tumblr. Sean Parker on Twitter: The Media Is Its Best – And Worst – Friend. The media giveth, and the media taketh away. 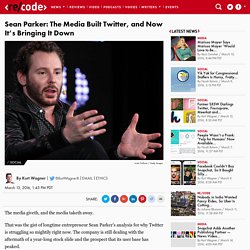 That was the gist of longtime entrepreneur Sean Parker’s analysis for why Twitter is struggling so mightily right now. The company is still dealing with the aftermath of a year-long stock slide and the prospect that its user base has peaked. When Bloomberg’s Emily Chang asked Parker, former president of Facebook and Napster co-founder, whether or not he thought Twitter would survive, he sidestepped the question by offering up a pretty insightful explanation for its struggles. The key challenge, according to Parker, is that Twitter grew quickly thanks to the media and celebrity users. And having a user base built by the media and celebrity users doesn’t help much when it comes to connecting people, as Facebook does. Has the podcasting renaissance been overstated? Podcasting is in vogue right now. The so called “Serial Effect” – named after the phenomenally popular 2014 series which revisited a 15 year old murder case from Baltimore - has led to a surge of recent media, investor and consumer, interest in the genre.

Publishers actively talk about finding “the next Serial” and there’s been plenty of commentary about podcasting enjoying a golden age. Most election commentators are men. This project is trying to help change that. Advocates for media diversity are trying something different this election cycle: They're going to publish data about the gender balance of commentators on the six highest-rated cable news shows, every week from now until November, in hopes of pressuring networks to do better.

Who Talks? , a project of GenderAvenger in partnership with the Rutgers University Center for American Women and Politics (CAWP) and the Women’s Media Center, will monitor six morning and primetime cable shows: CNN's New Day and Anderson Cooper 360, Fox News's Fox & Friends and The Kelly File, and MSNBC's Morning Joe and The Rachel Maddow Show. "With women seeking the nation’s highest office and key executive and legislative roles around the country, it’s essential to learn who’s translating and explaining national politics and whether women analysts are at the table contributing to the conversation," CAWP director Debbie Walsh said in a statement.

GMG's David Pemsel: Membership will make up a third of the Guardian's revenue within three years. The Guardian has not been agile enough to respond to the challenges faced by the publishing industry over the past few years, according to Guardian Media Group CEO David Pemsel. Speaking at Digital Media Strategies 2016, Pemsel said that an overly narrow focus on the "big number" of its global audience masked some of the strategic issues that the Guardian was facing:

Uk.businessinsider. David NeedlemanDan Loeb asked Michael Wolf to find a CEO for Yahoo. On Tuesday, top business-strategist Michael Wolf gave a massive presentation on the future of tech and media in 2016 at The Wall Street Journal's conference. He shared that the average American spends more time on tech and media then sleeping, and predicts that messaging will blow past social networking.

But if you are all prepped for the cord-cutting revolution, you'll have to wait a little longer — though streaming music is going to be the next big winner. And Wolf knows what he's talking about. He served on the board at Yahoo, helping bring Marissa Mayer in as CEO, and cofounded the technology and media consulting-firm Activate, where he is managing director. Newsonomics: The New York Times re-invents Page One — and it’s better than print ever was.

Ah, the art of the broadsheet Page One, with its mystical above-the-fold, below-the-fold double secret handshake code, its photo telegraphing The Big Story, its fonts delivering nuance, and its italics offering their own sweet siren song of understanding? Our never-thought-about assumption: this is what newspapers should look like, and they did, city to city, nation to nation. We hardly considered it design; it just was. Then, 20 years ago, many of us starting working on online news. Meltygroup annonce le lancement du projet live-cast, avancée décisive en matière de vidéo live. Rencontre avec 3 héros de l’Internet. Par Alice Pairo, France Télévisions, Direction de la Prospective. The game has changed: Adblocking and audience consent. Excuse me while I adjust the sign in the TMB offices to read 'It has been [0] days since we last wrote about adblocking'. As much as publishers must hate it, adblocking continues to snowball, becoming a bigger and bigger issue as it does so.

Even as publishers become more dependent on the revenue the ads generate, the practice of blocking ads becomes more and more widespread. We wrote last summer on the possibility of ad-blocking becoming widespread on mobile devices, as Apple had just announced it would enabling users to do just that, saying: "Since iOS users comprise the vast majority of mobile web browsers - in the US at least - that's suddenly very bad news for publishers, and even for Google, which reportedly sees 75 percent of its mobile revenue coming from iOS devices. As publishers lose control, are newspaper websites a dead parrot? A truth is dawning on media owners (or in many cases it has dawned, but they don’t like to talk about it). Publishing is over. Obviously this isn’t true in its purest sense; publishing is actually flourishing, just not for publishers. As Facebook last week extended the reach of its instant articles to anyone, as Google invests in making news articles load lightning fast, as virtual reality can be produced by a £200 kit, it is fair to say we have more opportunity today to put out remarkable works of fact and fiction to the world than ever before.

However, defining decisions about formats and revenue are dictated at platform level, Facebook and others, or at carrier level, or even, in the case of Apple’s stance against the FBI, at device level. The search for the killer bot. By Casey Newton | Illustrations by Peter Steineck The first bot I ever befriended went by the name of GooglyMinotaur. The Minotaur appeared in 2001 to promote Amnesiac, the latest album from Radiohead, which was and still is my favorite band. I happily chatted with the Minotaur about Radiohead history, information about the band’s tour, and the MP3s it offered for download. Whoops by Jonathan Libov. When the weather is bad I take a bus to work. Lifeline... on the App Store. 2016 : VR, ad-blockers, érosion TV, ciné résistant, et fin des coups de fil.

Bleacher Report did 29 million video views on Instagram in a month. Why is Quartz launching its own app? A few theories. The World's Top 10 Most Innovative Companies of 2015 In Media. Podcast Pioneers: Where Audiences Choose to Listen to Ads. Podcast Pioneers: Where Audiences Choose to Listen to Ads. Sorry, journalists. Millennials would rather pay for Netflix than news. Littérature papier et littérature numérique, une opposition ? The Next Social Media We Want and Need! — Backchannel. Who said what about Mozilla cofounder launches new web browser that replaces ads — Trooclick. The FANG Playbook. Google’s AMP Poised To Take The Lead From Facebook’s And Apple’s Walled Gardens. Are niche publications the future of print? Part Two. DLD 2016 Highlights: The third industrial revolution. Quartz sees its readers’ behaviors evolving, so it’s evolving with them: It’s launching its first major app.

Some Media Predictions — Thoughts on Media. Hot Pod: Is the next front in podcast innovation hardware? From Nieman Reports: Melissa Bell of Vox Media on the online publisher’s embrace of Snapchat, its spirit of collaboration, and more. Hot Pod: Is the next front in podcast innovation hardware? How the Financial Times is speeding page load. Comment Radio France compte devenir un média global. WaPo's director of product Julia Beizer on making clever bets. The complete guide to virtual reality in 2016 (so far) Newspaper bosses ‘paralyzed’ by change, clueless about paid content, says Steve Brill – Poynter. How Slate, The Huffington Post, Bloomberg fight ad blocking. The five most influential trends for publishers in 2016. Inside La Presse+ Decisive and Final Move to Digital. TechTrends 2016. Will online video be the salvation of journalism? Can 'slow journalism' work? Delayed Gratification is finding out. 5 key takeaways from the Reuters Institute’s Digital Leaders Survey.

The New Republic’s Next Chapter. The New York Times Will Make Money with Virtual Reality in 2016, Mark Thompson. 2015 retrospective: 8 major developments to note. The End Of Apps As We Know Them. An Old-Media Empire, Axel Springer Reboots for the Digital Age. Role of Medium in American politics and government: How Medium is breaking Washington's op-ed habit. The Great Journalism Innovation Problem. There's No Such Thing as an MCN. It's a Figment of Your Imagination. 6 for 16: Key Stories for the year ahead. 10 consumer trends in 2016: smartphone fad gives way to AI. The End Of Apps As We Know Them. Are niche publications the future of print? Part one. Built on passion: How Vox Media grew from its roots as an Oakland A’s blog into one of the Internet’s biggest publishers. DigitasLBi Paris publie, avec l'IFOP, une étude sur les attentes des consommateurs connectés. Les attentes du consommateur connecté 2015 : multi-screen, social shopping, personnalisation. Les composants essentiels de la nouvelle expérience retail.