18 Spooky Native American Monsters That Will Keep You Awake At Night. 10. 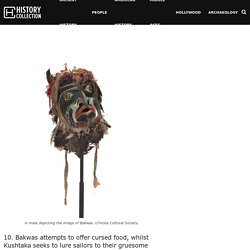 Bakwas attempts to offer cursed food, whilst Kushtaka seeks to lure sailors to their gruesome deaths As an innately spiritualistic culture, throughout Native American society there are numerous yet comparable accounts of a wide variety of evil supernatural spirits who prey upon tribes. Bakwas (also known as the wild man of the woods) is one such spirit belonging to the Kwakwaka’wakw people of modern-day British Columbia, similar to the Haida’s “gagit”, the Nuu-chah-nult’s “pukubts”, and the Tsimshian “ba’wis”. Bakwas offers ghost food out of cockle shells to humans stranded in a wood where drowned souls congregate; if they accept and eat the offered food, then they too become a ghostly being like Bakwas. 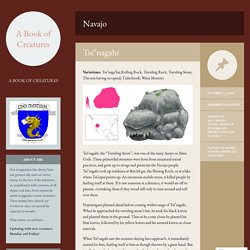 They were born as a result of a grand social experiment – the separation of the sexes. Early on in the history of humanity, men and women quarreled often. They tried living apart for a while, but boredom and starvation eventually reunited them. It was not without repercussions. Each of the Anaye was born and abandoned by their horrified mothers, but survived long enough to become a threat. The Navajo Pantheon of Gods and Spirits. Please mention Godchecker.com when praying to the Gods. 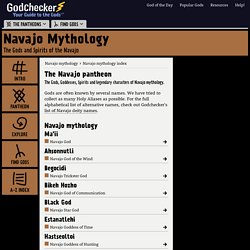 Copyright © 1999-2020 Godchecker, Inc. All rights reserved. (Copyright notice.) Please do not copy without permission. If you wish to use our material in your essay, book, article, website or project, please consult our permissions page. The Gods have provided us with a robust privacy and cookie policy which all mortals are advised to read. For all media enquiries please contact us here. Found this site useful? Spotted a mistake? Godchecker™ is a trade mark used under license. Navajo creation story – the Talking God. In the world below there was no sun and no moon, and therefore no light, yet vegetation in innumerable forms and the animal people thrived. 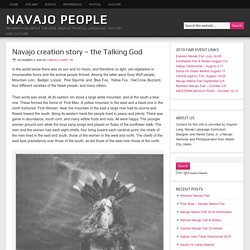 Among the latter were Gray Wolf people, Mountain Lion, Badger, Locust, Pine Squirrel, and Blue Fox, Yellow Fox, Owl,Crow, Buzzard, four different varieties of the Hawk people, and many others. Their world was small. At its eastern rim stood a large white mountain, and at the south a blue one. These formed the home of First Man. A yellow mountain in the west and a black one in the north harbored First Woman. Navajo Origin Legend. Simply entertaining - Navajo Times. Navajo Times | Adron GardnerRosie Begay loses control of her hoop in the hoop race during the “Shielding our Culture” finale of outdoor games at the Navajo Nation Museum July 27. 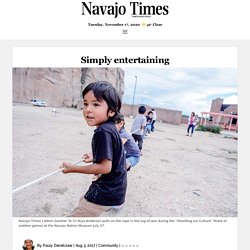 Two little girls grabbed sticks and wooden hoops to play Tsibaas, or Hoop Race. This was one of the traditional games played in Chaco Canyon, said Tim Begay, a Navajo culture specialist from the Historic Preservation Department. “It was played all the time with kids when they were small,” Begay said. “It was a game that everyone used to play before there was TV and smart phones.” The game involves drawing four lines on the ground to create two narrow rows spaced a few feet apart. Navajo Land and People – Nizhoni Ranch Gallery. Navajo Nation Group #6: Family Structure and Marriage. The Navajo tribe, like many tribes, places a lot of importance on family structure. 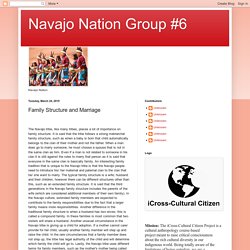 It is said that the tribe follows a strong matriarchal family structure, such as when a baby is born that child automatically belongs to the clan of their mother and not the father. When a man does go to marry someone, he must choose a spouse that is not in the same clan as him. Even if a man is not related to someone in his clan it is still against the rules to marry that person as it is said that everyone in the same clan is basically family. An interesting family tradition that is unique to the Navajo tribe is that the Navajo people need to introduce his/ her maternal and paternal clan to the clan that he/ she want to marry. The typical family structure is a wife; husband and their children, however there can be different structures other than this, such as an extended family structure. Navajo Nation. Sand Painting as Healing Ritual. History, Culture, Language, & Facts.

Navajo, also spelled Navaho, second most populous of all Native American peoples in the United States, with some 300,000 individuals in the early 21st century, most of them living in New Mexico, Arizona, and Utah. 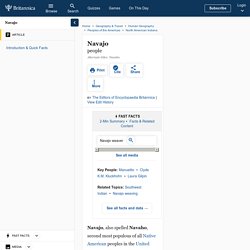 Read More on This Topic. At The Rainbow's End. Long, long ago when First Woman the Goddess was created, she became fully grown in four days. 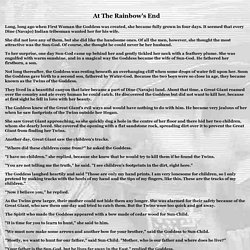 It seemed that every Dine (Navajo) Indian tribesman wanted her for his wife. She did not love any of them, but she did like the handsome ones. Navajo Religion. Sacred-Texts Native American Southwest The Navajo, who call themselves Diné ("The People") are the largest Native American group in North America. 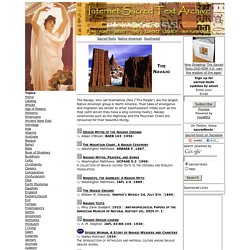 Their tales of emergence and migration are similar to other Southwestern tribes such as the Hopi (with whom they have a long running rivalry). The iCross-Cultural Citizen Project – Our Indigenous World: Navajo Nation- Group 4: Navajo Music. Music plays a very important role in the Navajo People's life. 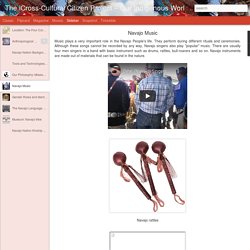 They perform during different rituals and ceremonies. Although these songs cannot be recorded by any way, Navajo singers also play "popular" music. There are usually four men singers in a band with basic instrument such as drums, rattles, bull-roarers and so on. Navajo instruments are made out of materials that can be found in the nature. Navajo Art: Ancient to Modern Techniques. Navajo art first became known to Europeans in 1581, around the time Spanish explorers arrived in the southwest region of North America.

Crafts like spinning and weaving were initially used as consumer goods for trade, but over the years have become collected as vibrant works of art. There are over 100,000 people living in northern Arizona’s Navajo County, and as the largest American Indian group living in the United States today, Navajo art continues to thrive – from the in-demand earthtones of Navajo pottery to the vibrant turquoise and stunning silverwork of Navajo jewelry. American Indian art encompasses everything from carving to weaving, each design telling a story through motifs and symbols that honor their heritage. Most surviving antique examples are anywhere from one to two hundred years old. Many of these pieces were made from organic, ephemeral materials which has contributed to their wear and loss over the years.

"This is a government for the people. Reading: Types of Religion. The symbols of fourteen religions are depicted here. Independent Lens . MISS NAVAJO . Navajo Culture . Religion. Traditional Navajo life is inseparable from religion, seeking to maintain balance between individuals and the universe and to live in harmony with nature. All living things are considered relatives, each containing its own spirit or inner form. Religion and expressive culture - Navajo. Religious Beliefs. Navajoprofile.wind.enavajo. History, Culture, Language, & Facts. Navajo Legends (Folklore, Myths, and Traditional Indian Stories) Indian Languages Indian Cultures What's new on our site today! This is our collection of links to Navajo stories and folktales that can be read online. We have indexed our Native American folklore section by tribe to make them easier to locate; however, variants on the same legend are often told by American Indians from different tribes, especially if those tribes are kinfolk or neighbors to each other.