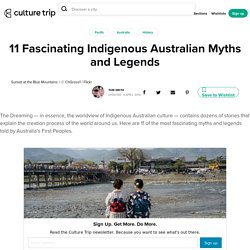 Here are 11 of the most fascinating myths and legends told by Australia’s First Peoples. Sign Up. Dreamtime Meaning - Aboriginal Australian Art & Culture. According to Aboriginal belief, all life as it is today - Human, Animal, Bird and Fish is part of one vast unchanging network of relationships which can be traced to the great spirit ancestors of the Dreamtime. 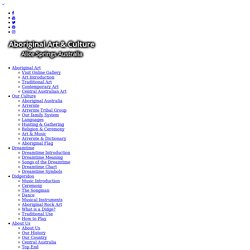 Newmexianthr.6_7.3. Papillon Grand Canyon Tours. In Navajo folklore, the coyote is considered the most mischievous, yet pleasant animals. 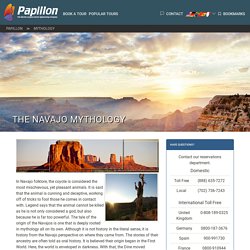 It is said that the animal is cunning and deceptive, working off of tricks to fool those he comes in contact with. Legend says that the animal cannot be killed as he is not only considered a god, but also because he is far too powerful. The tale of the origin of the Navajos is one that is deeply rooted in mythology all on its own. Although it is not history in the literal sense, it is history from the Navajo perspective on where they came from. The stories of their ancestry are often told as oral history. Navajo Legends (Folklore, Myths, and Traditional Indian Stories) 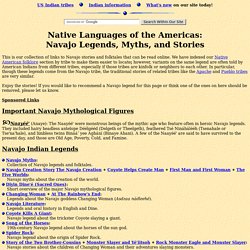 This is our collection of links to Navajo stories and folktales that can be read online. We have indexed our Native American folklore section by tribe to make them easier to locate; however, variants on the same legend are often told by American Indians from different tribes, especially if those tribes are kinfolk or neighbors to each other. In particular, though these legends come from the Navajo tribe, the traditional stories of related tribes like the Apache and Pueblo tribes are very similar. Enjoy the stories! Sponsored Links Important Navajo Mythological Figures Anaye: The Anaye were monstrous beings of the mythic age who feature often in heroic Navajo legends.

Navajo Gods and Goddesses. Navajocodetalkersadmin on May 12, 2014 - 12:00 pm in Folklore Navajo has a very rich culture, history, beliefs and tradition making them an exceptional group in the world. 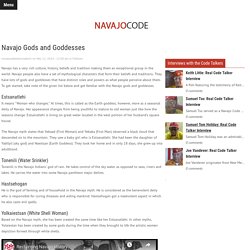 Navajo people also have a set of mythological characters that form their beliefs and traditions. They have lots of gods and goddesses that have distinct roles and powers as what people perceive about them. To get started, take note of the given list below and get familiar with the Navajo gods and goddesses. Estsanatlehi It means “Woman who changes.” The Navajo myth states that Yebaad (First Woman) and Yebaka (First Man) observed a black cloud that descended on to the mountain. Tonenili (Water Srinkler) Fact Sheet. Important Note The Navajo Nation recognizes Daylight Savings Time, even when the state of Arizona does not. 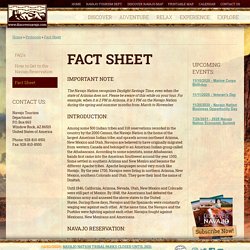 Please be aware of this while on your tour. For example, when it is 2 PM in Arizona, it is 3 PM on the Navajo Nation during the spring and summer months from March to November. Introduction: Australian Aboriginal mythology. The Dreaming, also called dream-time, or world dawnAustralian Aboriginal languages altjira, altjiranga, alcheringa, wongar, or djugurba, mythological period of time that had a beginning but no foreseeable end, during which the natural environment was shaped and humanized by the actions of mythic beings. Many of these beings took the form of human beings or of animals (“totemic”); some changed their forms. They were credited with having established the local social order and its “laws.” Some, especially the great fertility mothers, but also male genitors, were responsible for creating human life—i.e., the first people. Mythic beings of the Dreaming are eternal.

Though in the myths some were killed or disappeared beyond the boundaries of the people who sang about them, and others were metamorphosed as physiographic features (for example, a rocky outcrop or a waterhole) or manifested as or through ritual objects (see tjurunga), their essential quality remained undiminished. Aboriginal Culture. Traditional Owner Charlie Mangulda with a Rainbow Serpent in Arnhem Land, Northern Territory. 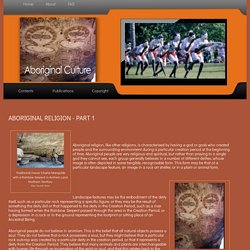 Photo: David M. Welch Aboriginal religion, like other religions, is characterised by having a god or gods who created people and the surrounding environment during a particular creation period at the beginning of time. Aboriginal people are very religious and spiritual, but rather than praying to a single god they cannot see, each group generally believes in a number of different deities, whose image is often depicted in some tangible, recognisable form.

This form may be that of a particular landscape feature, an image in a rock art shelter, or in a plant or animal form. Wandjina bring the Wet Season rains to the people of the Kimberley Photo: David M. Aboriginal people do not believe in animism. The Lightning Brothers in the Victoria River District, Northern Territory Photo: David M. There is no one deity covering all of Australia. Hawaiian Myths and Legends. Hawaii is full of myths and legends - stories that are full of passion, betrayal, loyalty, birth and death. 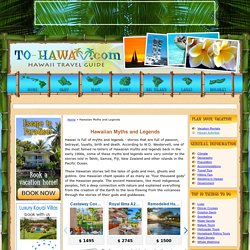